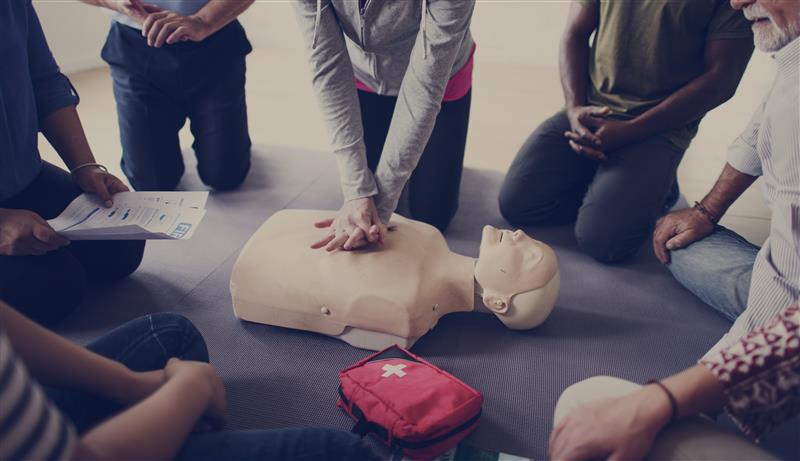 This case study was led by Caroline Ratcliffe, Simulation Instructor in the Faculty of Health and Wellbeing.

Student feedback across 16 undergraduate programmes within the Faculty of Health and Wellbeing highlighted the need to overhaul the delivery of essential mandatory training for around 3,000 health students per academic year.

The compulsory mandatory training needed an alternative solution to the existing delivery methods (classroom-based), which had a very didactic approach to teaching. Students were not having their understanding of the subject matter tested, and the delivery was often inconsistent across the programmes, which inadvertently caused a diminished level of quality assurance. Some students had expressed concern that they were feeling ill-prepared for an emergency situation that may occur while on a practical placement.

As the University strives to become more sustainable, the possibility of having the mandatory materials delivered via an electronic format was discussed, to help reduce the need for paper handouts.

Nature of the innovative activity

Student voices were essential in the reshaping of the training and the re-writing of the materials, driven by students requesting the theory to be completed online. Collaboration with staff within the Faculty, as well as external placement contacts, occurred, which led to an agreement on the content of the online training.

Following student feedback and discussions with colleagues, Caroline reached out to the Faculty Learning Technologist to ask for advice on which platform to use to deliver the mandatory theory elements. The aim was to reduce some of the issues that had been identified.

The benefit of using technology to enhance the students’ learning needs was the ability to incorporate media within the workbook. Animations were utilised to explain the relevant anatomy and physiology. Videos were shown to fully describe a procedure, and pictures/photographs were also used. The content was therefore more visually appealing. From the point of conception to the point of completion it took one full-time member of staff around four weeks to write the two workbooks within PebblePad with accompanying multiple-choice quizzes within Microsoft Forms.

Now that the theory content is delivered by PebblePad there has been an improvement in programme quality assurance within the Faculty. Every student is receiving the same theory content and the same practical lessons. There has been an improvement to the sustainability credentials of the Faculty as no paper material is printed for the sessions, the workbooks are all available online and across a variety of platforms.

Since the launch of the workbooks, student feedback has been positive and suggestions have been made for improving the continued use of the workbooks for future academic years from current third year students.

Issues highlighted were minor. For example, with a question within Microsoft Forms, an acronym had been used in a question and the form could not ascertain which answer was correct as there were several similar letters in the acronym itself. Some students had repeated the quiz five or six times to try and achieve a 100% pass rate for the quiz and were extremely frustrated that they could not pass this question. The following academic year, this question was withdrawn.

The success of these workbooks has been acknowledged by the Senior Management Team and is currently shared throughout the Faculty as best practice. A new request for a third workbook has been made which will soon be created. Other programmes not originally included have now also adopted the workbooks. This includes the Foundation Year and Postgraduate programmes, to promote consistency across the Faculty.

For anyone considering using PebblePad and/or Microsoft Forms to help redesign some of their curriculum delivery, Caroline recommends that you speak to your students first, and ascertain what they want and need. Once you have this information, discuss the plan with your Learning Technologist to get the most accurate advice about which programme would satisfy your needs fully before committing to it. Before embarking on the project, ensure you have enough time to develop it fully, and then test it repeatedly across many platforms before releasing it to your students.