This week has finally seen my return to preparing an article on businesswomen in fifteenth-century Canterbury that I haven’t really had a chance to work on since late last year. So it has been a case first of trying to pick-up where I left off and rethink myself back into the subject. However having worked out the rolling five-year average for all the ‘intrantes’: those below the freemen who were permitted to reside and trade in the city and compared it to the number of businesswomen similarly living and working independently, it is interesting to note that in the 1480s, in particular, these numbers do not follow the same pattern and the figures for women pick up in this decade whereas the total figures are the lowest for the whole century. I’m still working out what this may mean in terms of how these businesswomen were viewed by the authorities, not least because this broadly coincides with the incidence in the city’s courts of those classed as a ‘femme sole’ (a married woman who was legally seen as responsible for her commercial activities). Demonstrating once again the importance of the city’s medieval records, and these are still held at Canterbury Cathedral Archives and Library.

This week has been quite quiet in terms of matters relating to the Centre, but it is worth recording that the smart new flyer for the Medieval Canterbury Weekend has arrived and Diane Heath and I have started distributing them. So far you can now pick one up at the Arts&Culture Box Office in Augustine House, and English Heritage at St Augustine’s Abbey has some too. We hope to spread them around Canterbury, Kent and further afield in the next couple of months, including at the BBC History Weekends at York (25 – 27 September) and Malmesbury (15 – 18 October). Ticket sales are coming along nicely, and I’m looking forward to seeing lots of people who are interested in all aspects of medieval history next April. 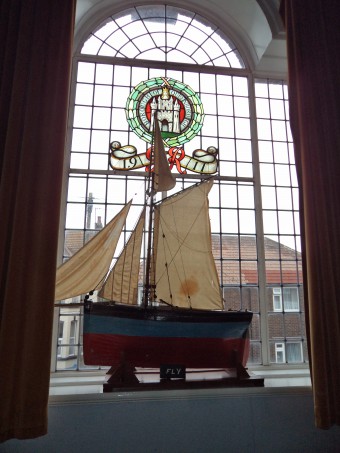 The other event this week was the farewell lunch for Nicky who has been a stalwart for the History Department at Canterbury Christ Church for about a decade. As the secretary and general helper to students over the years she has been a highly valued member of the team at Glebe House, and it is perhaps fitting that the historians’ relocation to Findon coincides with her retirement – the end of an era. Anyway to return to the lunch, almost a dozen of us gathered at ‘The White Hart’ in Castle Street – in my opinion a good choice – and among those present was Martin Watts. Some of you will remember Dr Watts from earlier in the year when he ran a very successful and enjoyable study day on the Great War and its aftermath. I haven’t seen Martin for several months so it was good to catch up with what he has been doing relating to the Centre. His new projects sound very exciting hence the rest of the blog will be a brief summary of these.

However before I get on to them, I thought I would mention that Martin is one of several historians running courses for enjoyment through the Learning programme of the Arts&Culture part of Christ Church. Martin has a couple of day schools running from 10am till 4pm, the first is on Saturday 17 October and is called ‘Kent and the First World War – From Peace to Catastrophe, 1914–1916’, and the second on Saturday 5 December at the same times is entitled ‘Kent and the First World War – from Catastrophe to Victory, 1916–1918’. Among the topics that he will be covering at the second day school, and perhaps especially topical at the moment, will be Maidstone’s role in the training of friendly alien soldiers, which was the case following the introduction of the Military Service conventions in 1917 and the consequent influx of men of Russian Jewish extraction. There are lots of other courses, so check out the booklets or go online to the Arts&Culture webpages.

Keeping with this Great War theme and concentrating especially on commemoration, Dr Watts is involved in a bid to bring the travelling ‘Poppies Wave and Weeping Window’ to Canterbury next year. At the moment it is not yet known whether the bid has been successful – notification will come in September, but potentially this is a fantastic opportunity for Martin and the Centre to become involved in a variety of ways. The bid is being fronted by Canterbury City Council, with Canterbury Christ Church as one of the main partners. Among the participants so far has been Hazel Stone (Sidney Cooper) and Frances Chiverton (outreach and engagement). If all goes well Canterbury will host the touring poppies display which is intended to engage the public in the commemoration of the Great War, just as it did at the Tower of London. This could be a fantastic opportunity to involve young and old in these important events through a wide mix of talks, workshops and study days, including Martin presenting materials to schoolchildren when he makes school visits. It is envisaged that other people from Christ Church will also participate, especially those in English and Music to provide a multimedia experience.

Another of Martin’s projects, albeit it is very much in the early stages, involves historians at the University of Artois and Martin will be meeting these modern historians next week. Potentially such collaboration will benefit students on both sides of the Channel and Martin hopes this will open up new avenues when he meets Professor Stephen Rowley and his colleagues at Arras, not least the start of joint student projects on the Great War battlefields and other topics linked to the War and its aftermath.

Martin’s final project sets him squarely in Kent because this involves the coastal town of Whitstable. This is a fascinating place and deserves to be better known and studied, while still giving it the chance to remain a vibrant, working community. The sea has always been important, obviously, and this project draws on the town’s maritime heritage, both historically and ecologically. Thus this project is as much about the natural environment of the foreshore and sea as it is about the history, although both, as you might expect, interact and engage with each other in a variety of obvious and far less so ways.

Martin’s involvement in what will be called the ‘Whitstable Maritime Discovery Centre’, other participants include the Harbour Board, is as part of the team that has put together a bid for funding from the Department of Communities and Local Government. This is an extremely ambitious project, the team want a permanent exhibition centre, and, as well as displays, proposed events might include study days, workshops and projects that are intended to bring in locals and visitors. Being an ex-merchant seaman of many years standing, such a project is very close to Martin’s heart, as well as which he has considerable expertise in this field. The team won’t know the result of their bid that soon but once they know I’ll pass on the news. And on that note of expectation I’ll finish this week, but just to say rather than a photo of Whitstable, I thought I would introduce you to Queenborough for those who have not been to Sheppey.