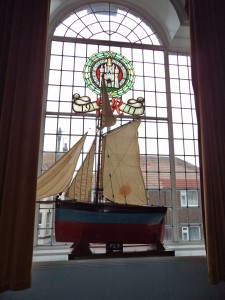 Another person I saw this week was Dr Martin Watts, who also contributes to the Centre for Kent History and Heritage, and some of you have probably heard Martin, either at the Richborough conference a few months ago, or last year when he was speaking on The Great War at several events. He has been to France recently and as a consequence of his research and contacts is about to start writing a book on the Royal Marines.

Martin has also been very busy at Whitstable working on a major history and heritage enterprise that will be a major part of the ‘Whitstable Maritime Discovery Centre’. This project is extremely exciting, not least because it is bringing together a number of interested local and regional parties, including the Harbour Board and Canterbury City Council, as well as Martin for Canterbury Christ Church and organisations in Whitstable itself. The team want a permanent exhibition centre, and, as well as displays, proposed events might include study days, workshops and projects that are intended to bring in locals and visitors. Funding for this will be sought over the coming months and I’ll keep you informed regarding progress. Among the activities Martin is currently undertaking is working with local historians and others regarding important events and activities that took place along the coast between Herne and Faversham. Again, as this develops, I’ll let you know what is happening and where you can find out about their discoveries.

Keeping with this maritime theme, I thought I would just mention that I recently had a very interesting conversation with Professor Maryanne Kowaleski from Fordham University, New York, who has been speaking at several conferences in Britain and France over the last few months. As perhaps the greatest expert on maritime fishing in medieval England, it was fascinating to hear about her various projects on different aspects of the fishing industry in the Middle Ages. She first started on this subject several decades ago when she was studying Exeter’s medieval records and it is the contrasting fortunes of the west and east coastal ports in the 15th and 16th centuries that we discussed when we met up.

Having finished and submitted my article on Canterbury’s 15th-century business women, I have now turned to exploring the fortunes of Kentish fishermen during this late medieval/early modern period during which, in broad terms, Maryanne sees a rise in the fortunes of the western fishermen compared to and possibly at the expense of their eastern counterparts. In the past I looked at the inheritance practices of this occupational group using the testamentary records, especially for the Lydd and Folkestone fishing families, and I’m intending to use these and similar probate materials from more of Kent’s coastal communities for this new study. All being well, it will be part of a collection on the history of the sea and those who gained a living thereby during this critical period in the development of Western Europe, and it is going to keep me busy for the rest of the summer and into the early autumn. As you might expect, there is considerable variation around the Kent coast regarding the species of fish caught, methods used and times of the year when particular activities took place. To a degree this is still commemorated in such festivals as the Whitstable Oyster Festival that is currently taking place.

Yet, even though we still consume large amounts of fish, it is nothing compared to the Middle Ages when, as a consequence of the Church’s teaching that designated certain days and whole seasons, such as Advent and Lent, as non-meat but fish days, the demand for fish was colossal. Furthermore, the proliferation of monastic houses, especially in counties such as Kent, and even more in urban communities like Canterbury, the demand was even greater. For example, according to Domesday the cathedral monks expected to receive 40,000 herring from Sandwich, but this was not the only type of fish served at the priory. The prior, on occasion, dined on halibut and mackerel, as well as oysters. Yet herring was by far the most important species (it has been calculated that the annual catch in the late 11th century was probably over three and a quarter million), and as well as the vast numbers that passed through the various fish markets, it was also seen as a suitable gift. For instance, the mayor of Faversham in the early 14th century sent 4000 to the sheriff of Kent and a further 1000 to Elyas the clerk, hiring a cart for 12d to take the herring to Canterbury. 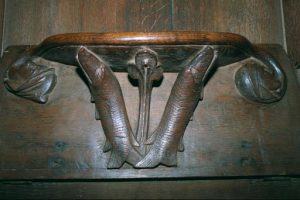 More on fishing and Kent’s maritime communities in the coming months, but I’ll just leave you with an interesting fact from a friend of mine Dr Elizabeth Eastlake who studied Boxley Abbey, where she found that in addition to herring and other fish over 1000 eels annually were transported to the abbey’s kitchen from its Medway fishery at Sharpness in the later 14th century.