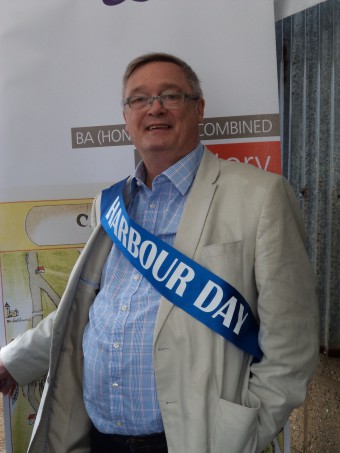 Before I get to Dr Martin Watts and his presence at the Whitstable Harbour Day yesterday, I thought I would just mention events in Northamptonshire.

As some readers of the blog may know, the County Record Service in that county had put forward a proposal to charge anyone booking time at the Northamptonshire Archives on certain weekdays a large sum per hour. This sparked a very considerable outcry among all types of researcher and the online petition drew signatories from the United States and Canada, as well as across the British Isles. Thus, I’m delighted to inform you that those responsible for this proposal have changed their mind and it will not go forward. This is an exceedingly important development, I think, because the documents and other sources held in these county (and national) archives should be valued as part of the nation’s heritage and freely available for consultation. 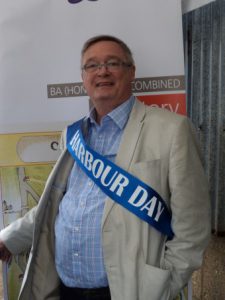 Martin in the ‘History Tent’.

Turning now to Martin’s activities, Mary-jane (who often runs Reception at Centre conferences, some of you have probably met her) and I met up with him late yesterday afternoon in the ‘History Tent’ down at the Whitstable harbour where he had been stationed all day as part of the celebrations. Through Martin, the Centre is linked to ‘Whitstable Maritime’ and, in particular, to the proposed GPS guided coastal walk project that when completed will run from Faversham to Herne Bay. This year Martin and Brian Baker, a recently retired Canterbury City councillor, had compiled a guide for their team of guides who took walkers on an hour-long walk in and around Whitstable harbour. As a pilot project, Martin and Brian were looking for feedback from participants about the walk and information provided, and Martin said he had had some helpful comments from those who had come to the tent after the walk.

Among the topics Martin and Brian had prepared notes on were the Horsebridge, the Whitstable Oyster Fishery Company, the Maunsell or Sea Forts in the estuary, and the ‘Favourite’. I won’t give away all the information that they had given to the guides to pass on to the walkers, but just a few examples to give you an idea of the wealth of history in the area. It is worth noting that when the GPS points are set up, the information provided at each station will extend beyond history to include archaeology and natural history. Firstly, to the Horsebridge, this slipway was the early port of Whitstable because the surface of the foreshore was hard enough for flat-bottomed boats to moor, allowing loading and unloading to be carried out using horse-drawn carts that could be taken right up to the boats. Some of these boats were flat-bottomed Thames (Sprit Sail) Barges that carried oysters and fish to the London market at Billingsgate. 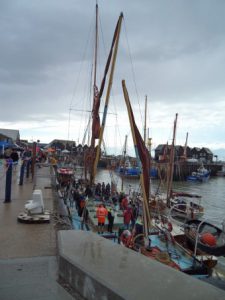 The ‘Greta’, a Thames Sailing Barge.

This brings me on to the local Oyster Fishery Company that was initially known as The Company of Free Fishers and Dredgers of Whitstable, and, like a similar company in Faversham, was an early co-operative, albeit just how the industry was run in medieval times is not totally clear from the surviving manorial records. For those interested in such organisations, I would recommend, P. Hyde and D. Harrington, Faversham Oyster Fishery Through Eleven Centuries, Faversham Hundred Records volume 4 (2002). The Whitstable Company was formally established by Act of Parliament in 1793, and the building in the photo (below) is the second of the Company’s headquarters.

Turning to more modern Whitstable history, the two Maunsell Forts visible in the estuary were built during the early days of the Second World War to provide early warning and anti-aircraft gunnery against German pilots using the Thames as a guide towards London. Originally, the seven towers on each fort were linked using walkways and the forts were manned by members of the Royal Artillery. Each fort housed up to 265 men for weeks at a time and these, with other similar forts in the Thames Estuary, accounted for about 50 German aircraft and flying bombs. After the War, they fell into disuse but some readers may remember their later use as the base for various pirate radio stations, including Radio Invicta! 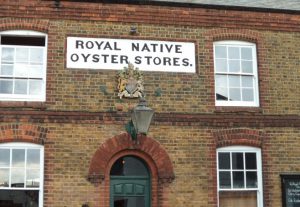 The fate of the ‘Favourite’, an Oyster Yawl is also of interest. She is a reminder of the 150 or so yawls the once farmed the oyster beds and now sits on the landward side of the new sea wall, heightened in 1955 following the devastating east coast floods two years earlier. Being landlocked, she is now cared for by the Favourite Trust, and their stall was similarly on the harbour front, close to Martin’s ‘History Tent’.

Martin and Brian had about 40 visitors to their stand, which is encouraging and many of these had moved to the area recently and were keen to find out about their new neighbourhood. Even though it poured with rain and there were hailstones, it did not really dampen the spirits of the crowds gathered in the harbour area, suggesting that such events should be part of the Centre’s activities. Otherwise, Dr Diane Heath and I are still working on various Centre events for the future, including the Medieval Canterbury Weekend 2018, but I’ll now take off two weeks on the blog and catch up with readers again in late August.

2 comments on “Whitstable – oysters, boats and the Harbour Day”