Canterbury Maps and Mapmakers, plus other events.

Canterbury Maps and Mapmakers, plus other events. 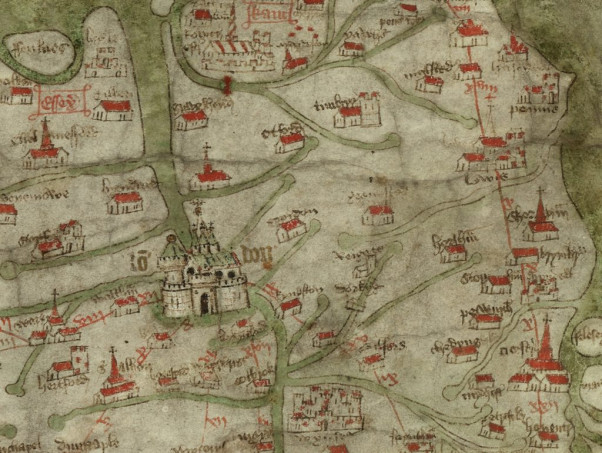 We are now a month away from the Medieval Canterbury Weekend and things are beginning to gear up which is very exciting. I’m delighted that several long-standing friends of the Centre are happy to chair this year, but if other CCCU staff members would like to volunteer that would be brilliant and much appreciated. Similarly, I am still on the lookout for more CCCU student volunteers, please do get in touch at sheila.sweetinburgh@canterbury.ac.uk you will have a great time.

Having been teaching about late medieval households in Canterbury recently, especially the survival of a smoke bay and the use of bricks for an early 15th-century inn kitchen, I’m greatly looking forward to Dr Chris King’s (University of Nottingham) presentation on ‘Houses and society in the medieval city’. He has a wealth of knowledge on the vernacular architecture of such cities as Norwich and York, and it will be exceedingly interesting to contrast his assessment of those places in comparison to Canterbury.

Another session at MCW 2022 I’m very much looking forward to is Drs Ryan Perry and Hannah Schühle-Lewis’ exploration of Richard Whittington’s legacy (yes, the man with the cat) and how through the work of his executor and London’s common clerk John Carpenter the Guildhall Library would become a store of devotional and other texts in the early 15th century for literate communities within the city. Moreover, taking the idea of texts and houses respectively, it will be fantastic to welcome back to Canterbury two alumni, Drs Lily Hawker-Yates and Dean Irwin who will be speaking on the Sunday. In addition, we have a third former CCCU doctoral student as a speaker because Dr Harriet Kersey will discuss the life and times of one of the most powerful women in 13th-century England.

Next week I’ll be back on Lossenham, Kent’s Maritime Communities, specifically Dover and CCCU’s, orgainsed by Dr Claire Bartram, and Kent’s IHR Centenary projects, as well as Nonington, but for now just a quick note to say that the Kent History Postgraduates met this week to discuss the way forward for the rest of the academic year – we’ll be trying out some major differences; and I want to use this week for the Canterbury maps and map-makers study day last Saturday. This was organised by Dr Alex Kent (CCCU Geography), Dr Avril Leach (Kent MEMS) and Cressida Williams (Canterbury Cathedral Archives and Library).

The first session focused on the Middle Ages and both presentations were given by members of CKHH, the first by Professor Paul Bennett, Visiting Professor of Archaeology, and I did the other. Paul examined Prior Wibert’s waterworks plan from the mid-12th century which today is at Trinity College, Cambridge in the Eadwine Psalter. If you don’t know it, do check it out because Trinity has digitised it: https://mss-cat.trin.cam.ac.uk/Manuscript/R.17.1/UV#?c=0&m=0&s=0&cv=569&r=0&xywh=-2424%2C-1%2C7739%2C3954 and the following pages. As Paul discussed, the first person to realise the significance of this drawing and to discuss it in print was Robert Willis in Archaeologia Cantiana in 1867. For not only is it a beautiful representation of the cathedral and conventual buildings but as a working diagram of the priory’s hydraulic system to provide water for the monastic community from springs in Old Park, it is a truly remarkable record. Furthermore, it was a system that continued to work, as Paul found out in 1984 after Canterbury Archaeological Trust had cleared the system and a medieval tap was opened in the precincts. Unfortunately, the underground pipework was damaged three years later when road works took place in Military Road, but Paul is convinced that with some remedial work the system could be made to work again, perhaps a ‘green’ option for the Dean and Chapter. Returning to demonstrate the complexity and efficiency of the medieval scheme, Paul in his presentation traced the flow of water from the pond in Old Park via the conduit house and five settling tanks to a water tower just inside the city wall within the priory precincts at its north-east corner and on to the various water towers for storage and as a head of water with their taps and basins for washing. This complex scheme with spurs of pipework also included a cistern and basin in the lay cemetery and the large monastic fishpond. Additionally, it made use of rainwater that had been collected which was in part used to flush the necessarium and this wastewater as part of the scheme is similarly shown on the waterworks plan, the great drain running out from the precincts into the open sewer running down Duck Lane to the river.

After Paul’s fascinating presentation, we moved onto a very different type of map, the Gough Map of the mainland of the British Isles which was seemingly made in the early years of Henry IV and in London. However, my presentation was on Canterbury in context and so I explored first how the mapmaker decided to depict Kent – what interested him, or far more likely his patron, which seems to have been river systems especially in terms of London, and those that fed into the river and, for Kent, the estuary of the Thames. This may relate to the relative importance of moving goods (and people) by water rather than overland, as exemplified by the movement of stone from the quarries at Maidstone to Canterbury to build the city walls, the stone brought by water except for the short journey by cart from Whitstable to Canterbury. To complement his river systems, the mapmaker located a sizeable number of places in Kent, although unevenly across the county and perhaps not always obvious why he had made his selection. However at least to a degree these may relate to Crown and Church, specifically (archi)episcopal. Taking this down to the level of a single place – Canterbury, it appears to function through his depiction of royal castle, archiepiscopal cathedral and city wall with perhaps a city gate – Westgate, that c.1400 would have been the new Westgate, an archiepiscopal project within the (royal) city wall in that the wall’s recent reconstruct had been undertaken by the bailiffs as commanded by the Crown. Of course, this in turn might be seen to emanate from London, the royal court and seat of government, but also somewhere that had and to a degree still does see Canterbury and Kent as its ‘backyard’, the city and county under London’s long shadow.

After a coffee break, we moved on to the 16th century and later with presentations by Simon Pratt and Dr Jake Weekes of CAT and that of Dr Avril Leach. As well as looking at the circuit of the city wall, Simon explored the likelihood that there had been a now lost precursor for the Canterbury maps of 1588 produced by Smith and Braun & Hogenberg because for each there are several what might be considered different inaccuracies and equally ‘good’ depictions. This suggests neither copied from the other but that both had had another they could use. Simon thinks this ‘lost’ mapmaker may be Richard Lyne because something similar happened regarding maps of Cambridge. Furthermore, there is a Richard Lyne – Matthew Parker connection, thereby bringing it back to Canterbury.

Avril took us on a tour of late Tudor and Stuart maps that brought in Speed’s map of the city and a French version, the ‘Plan de Cantorbery’. She also explored maps that show parts of the city and suburbs and discussed why such maps might have been produced – whether we are looking at evidence of land disputes or similar territorial issues. Her final map was the fabulous and very large map of the liberty of Canterbury produced in the 17th century. Avril has only found what might be references to it in the city chamberlains’ accounts for 1680, albeit the map is often thought to be c.1640. Although, as Avril said, this remains open to speculation, as we discovered when we had another look at it in the exhibition in the archives in the late afternoon, for the city wall is shown as complete where it was breached by the Parliamentarians.

Having been instrumental in the production of Canterbury’s Historical Map, as published by The Historic Towns Trust, Jake wanted his audience to consider viewing maps as events – points of action and reaction. He was also keen to think about new audiences for maps and how to provoke interest and engagement where the smart phone has become the instrument of communication and knowledge exchange. This provided the audience with food for thought and over the lunch break those attending the conference were able to look at the Canterbury map and the information provided on the reverse.

After lunch Dr Alex Kent and Cressida Williams investigated 17th-century estate maps made for landholders, especially the Dean & Chapter, for holdings beyond Canterbury. Due to the nature of Canterbury’s hinterland, quite a lot of this was woodland. Between them Alex and Cressida discussed the key mapmakers of the period, men such as William and Thomas Boycote, and Thomas, Francis and Jared Hill. Illustrating their presentation with numerous examples, they showed how certain stylistic features were very similar across these maps, how detail and perspective were important, and how such maps were objects of pride as much as if not more than working documents. Consequently, those interested in such maps are very fortunate because the archives have recently been able to acquire three more of these maps rather than them disappearing back into private hands.

The final speaker of the day before we headed to the archives to look at the excellent display provided by Cressida and Daniel was Professor Gordana Fontana-Giusti (Kent Architecture) who explored the different approaches to mapmaking of cities in the early modern period up to Packe’s ‘New Philosophico-Chronological Chart’ from 1743. As she said, this scientific approach that sought to use perspective, depict buildings accurately and consider geomorphology offered new ways for the mapmaker, often men from or influenced by those first from Italy and later from the Low Countries. In her assessment of these developments, she then focused on Christopher Packe, who as a surgeon was interested in medicine, science as well as cartography. Thus in some ways this link between anatomy and mapmaking was a new approach, and what I found especially interesting was Packe’s use of atmospheric pressure measurements to determine height.

The audience’s appreciation of the day was clear from the number of people who then went down to the archives, so thanks to the organisers and speakers, and to the audience for their enthusiasm.

Finally this week, I’ll just mention that there will be another conference at CCCU on the 11 and 12 April on ‘Poverty, Poor Relief and Policy in Britain and Beyond, c.1600-1900’ which is being organised by Dr David Hitchcock (CCCU History) and Dr Samantha Shave (University of Lincoln). If this looks of interest, the programme is here: https://www.dropbox.com/s/26ii6kgdg81xs3x/Conference%20Booklet%20inc%20prog.docx?dl=0 and booking is through: https://www.eventbrite.co.uk/e/poverty-poor-relief-and-policy-in-britain-and-beyond-c-1600-1900-tickets-276540208207?ref=estw .