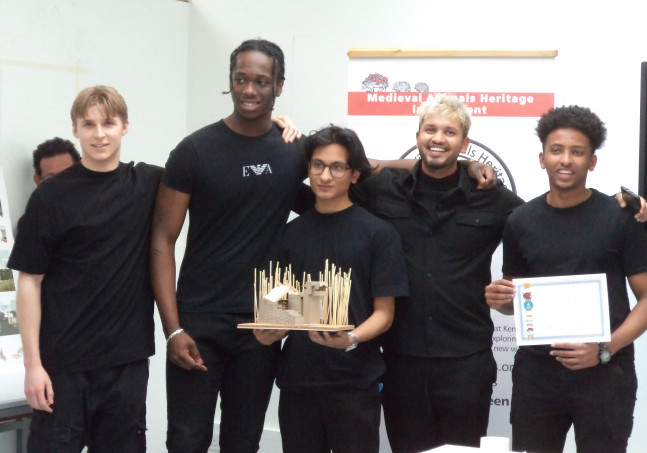 First of all, apologies for the very strange happenings regarding last week’s blog, I have no idea why it kept disappearing and nobody seems to know why at CCCU either. I’ll see what happens this week and if this works, I may reload last week’s again.

This week I want to mention a couple of events from last week, one from this, remind readers that there are still tickets available for Medieval Canterbury Weekend 2022 lectures, but not for the guided visits, https://www.canterbury.ac.uk/medieval-canterbury and flag up that the Annual Becket Lecture is coming up soon.

It is the Becket Lecture that I’ll start with because we are delighted to be welcoming Professor Miri Rubin from Queen Mary University of London. She will be speaking on ‘Black/Beautiful: The Meanings of Blackness in Commentaries on the ‘Song of Songs’’ on Tuesday 10 May at 6pm, and thanks to the generosity of the Vice-Chancellor there will be a wine reception from 5.30pm. The event will be in the Verena Holmes building, the lecture itself in VH0.04. It will be possible to join online through Teams using this link: https://teams.microsoft.com/l/meetup-join/19%3ameeting_YmJiMmU2NTctNDQ0Ni00MzNjLTlmZDAtZjQwMzVkMjNlZjNh%40thread.v2/0?context=%7b%22Tid%22%3a%220320b2da-22dd-4dab-8c21-6e644ba14f13%22%2c%22Oid%22%3a%225438ffb7-ff66-44f6-9ccf-cf504309571b%22%2c%22IsBroadcastMeeting%22%3atrue%7d&btype=a&role=a

And just to confirm, the lecture will not be recorded. So please do join us for what promises to be a fascinating talk.

Now moving back to last week, I caught the tail-end of the judging and celebration by the winners of Dr Diane Heath’s ‘Build Competition’ for the design of an Eco-friendly Learning Space for children with special needs. As regular blog readers will know, this is part of Diane’s NLHF ‘Medieval Animals Heritage’ project and the designers are students from the University of Kent’s School of Architecture and the winning design will be installed in the Franciscan Gardens in central Canterbury. Consequently, when I arrived the room was full of excited architecture students, their lecturers, representative from Eastbridge Hospital which manages the Gardens, that is Louise Knight, Robin Joy and Josh Rhodes (who gained his MA in Medieval and Early Modern Studies from CCCU a couple of years ago), two of Diane’s CCCU student volunteers: Eli Salter and Rhianna Lewis, and, of course, Diane. The judges were still deliberating, which meant I had time to have a look at the 5 short-listed designs – each team had produced a scale model and exhibition boards detailing their design, as well as chat to some of the students.

The buzz around the room increased as first the head of the School gave everyone some good news about the new plans for expansion due to take place for the start of the next academic year, and then Diane and Louise came forward to announce the winning team and to give them their well-deserved certificates. The consensus around the room seemed to be that the judges had got it right, albeit it was an extremely strong field and, as Diane said, they were all winners and to be short-listed should certainly boost everyone’s CV.

However, knowing Diane’s partiality for dragons, it is perhaps not surprising that she was delighted to present winners’ certificates to ‘The Dragon of Greyfriars’ team. The dragon will be built in the next couple of months. The site has already been chosen within the Gardens, and Diane and Penny Bernard, and those from Eastbridge are looking forward to inviting the first group of children to enjoy and explore this hopefully first of many such dragons – I feel Diane would ‘plant’ them everywhere if she had the chance. The dragon will be made from eco-friendly materials and as an extra bonus the children will be able to feed her/him tennis balls – far safer than being a fire-breathing monster!

Keeping with the Franciscan Gardens, I have submitted the new booklet text on the history of the Franciscans and the Gardens to Eastbridge and after a few tweaks we now have a text they are happy with and they are now adding the illustrations before it goes to press. This is another exciting collaborative venture involving CKHH.

The second event I want to mention from last week is the monthly Lossenham Project wills group meeting. In May we will be at Lossenham, but this month it was an online meeting. This group of project volunteers is building a database containing information from the PCC and Canterbury diocesan wills and inventories for parishes in the Rother Levels having Newenden at its centre. This is complementing the work undertaken by the archaeology team of professionals and volunteers on Lossenham Priory and other sites in the area, and there are other archaeologists and historians planning to explore the landscape through looking at aspects such as routeways. If this sounds interesting, the project leaders would be delighted to hear from you and this is the project’s website: https://lossenham.org.uk/ where you will find the monthly newsletter, Annie’s blog and contact details. We are, for example, looking for more people to join the wills group. If you would like to join and/or would like to take part in the next palaeography workshop sessions, please do get in touch.

For the wills group April meeting, we recorded that the first ‘Tea and Titbits’ meeting had taken place, that it had been a great success and that the ‘interesting’ word list from the wills and inventories was growing apace. East Sussex/west Kent dialect is apparently one of the contributory factors, but equally the loss of many trades and activities means that words of tools and other things have become ‘lost’ since the late 15th and 16th centuries.

The Google Drive spreadsheet seems to be working well for all and the group discussed a few minor points before getting to the main topic – the Lossenham Priory Study Day on Saturday 3 September, 10am to 4pm. This will be a mix of short talks during the day, by Dr Rebecca Warren, me, Richard Copsey and Dr Andrew Richardson on respectively, using wills to explore a community, in this case Sandhurst; farming in the High Middle Ages using the Ebony bedels’ rolls; the Carmelite Friary of Lossenham – from the documentary sources; archaeological discoveries from Lossenham Priory – the story so far. To complement this, members of the wills group are busy planning pop-up exhibition banners that they will be happy to discuss with our invited audience at lunch time and in-between the talks. This is an exciting next step and demonstrates the role of volunteers as project researchers and producers of their own findings and analysis in their own right. We are planning to put the exhibition banners on the project’s website after the event to benefit other audiences. So more details on these various exhibition topics after the May meeting and as we move towards September.

As I said last week, I had intended to make it to the second day of Drs David Hitchcock’s and Samantha Shave’s ‘Poverty, Poor Relief and Policy in Britain and Beyond, c.1600-1900’ conference and I did manage to do that. It was an interesting day complete with a fire alarm, but Dave and Sam handled this very smoothly and because the speakers kept well to time, we were back on schedule for the afternoon sessions. It was fascinating from my medievalist/Tudor perspective to see how far the impact of national poor relief policies through the parish has come to mean that for most historians everything is geared to the parish as the unit of analysis. Of course, in some ways this is not surprising, but this top-down imposition over the centuries, and thus the arrangement of much of the evidence, has seemingly meant parish/township has drowned out more fluid concepts of spatial analysis, such as neighbourhood and community. Yet this is at a time when computer programmes for social network analysis have come on leaps and bounds, and this approach might offer a fruitful alternative as a means to explore not only the networks that drew funders together but also those being funded. Consequently, I was delighted to hear Matthew Bayly’s paper on ‘Welfare and the Micro-Geography of the Parish, c.1800–1850’ where he was thinking about greater fluidity as groups of say tenant farmers within the parish shared ideas or acted together, having greater affinity through occupation and social standing than parish alone.

This reminded me of a collection of essays that has come out recently: B. Kane and S. Sandall (eds), The Experience of Neighbourhood in Medieval and Early Modern Europe (Routledge, 2021) and that part of my article that uses the parish of Lenham and neighbouring parishes to explore religious divisions in late Henrician Kent. Not that I want to mention here the matter of religion per se, but rather that the networks of those from both sides of this divide crossed and re-crossed parish boundaries, in addition to separating groups within the parish itself, as they sought to confound their opponents and bring a sense of solidarity to those of their persuasion. Just to give a single example, in his bid to ensure others of his reformist persuasion could influence the local parishioners, the curate Thomas Dawby called on his friends from neighbouring parishes to preach at Lenham, as well as trying to coerce others to read the Bible during services at the quire door. Moreover, after he received his own parish living, he continued to target those at Lenham, including his successor. Thus, as well as providing telling insights into the ways men (and occasionally women) engaged in such speech-acts and physical actions in these ‘battles’ for the souls of their neighbours, the depositions of the ‘Prebendaries’ Plot’ offer ideas about networks – the bottom-up ‘glue’ of neighbourhood and community, and the sense of belonging.

To finish, the CKHH wishes readers a Happy Easter and next week we will be almost in touching distance of the Medieval Canterbury Weekend 2022, as well as celebrating the two IHR Centenary projects led by Dr Claire Bartram at CCCU and Professor Mark Connelly at the University of Kent on Saturday 23 April at Westgate Hall, Canterbury!