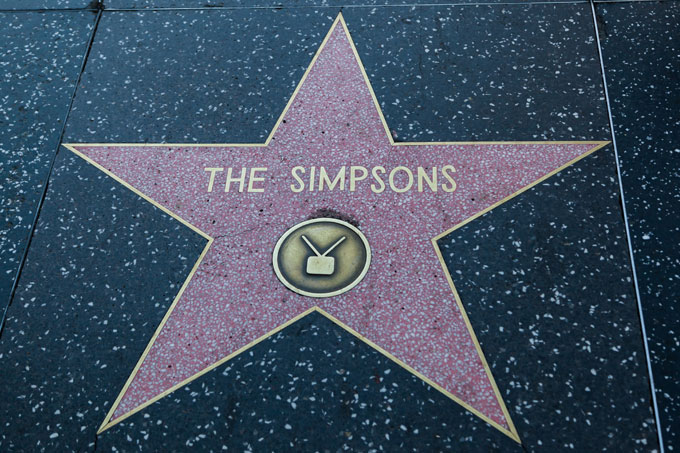 Dr Michael Goodrum looks at the cultural impact of The Simpsons and their enduring appeal.

At 672 episodes, The Simpsons is the longest-running sitcom in television history. Having completed its thirtieth season, and been renewed for two more, it is worth thinking about the cultural significance of this landmark series.

The show began as shorts on the Tracy Ullman Show in 1987, evolving into its present form in 1989. Commissioning a primetime cartoon was a risk for Fox, as at the time there were no other such shows. However, space was already being carved out for the Simpsons by shows such as Roseanne (1988-1997, 2018), with its focus on working-class life and a more dysfunctional family than previously seen in American sitcoms. The Cosby Show (1984-1992), which spent five consecutive seasons as the top-rated show on US television, was a major rival, both in terms of the family dynamics on display and its position in the ratings.

Bill Cosby was critical of The Simpsons, almost certainly arising from these same reasons; by 1992, Springfield had attracted so much attention that President George H. W. Bush stated that Americans should be “more like the Waltons and less like The Simpsons.” The response from the show that they were like the Waltons, both “waiting for the depression to end,” neatly showcases the satirical edge that The Simpsons had in its early iteration.

Audiences could laugh at Bart, the ‘underachiever, and proud of it’, while simultaneously being offered a model for emulation in Lisa. Its animated nature also meant that the show was able to tackle topics that other shows would skate around and led to it having a reputation as a bastion of liberal critique of contemporary American life.

The rise to prominence that took the show from gamble to worthy of comment by the sitting president is best represented through Bartmania, a cultural phenomenon of 1990 that swept across everywhere the show was in circulation – including my hometown where, as a seven year old, I was the ideal target audience. This followed 1989’s Summer of Batman that coincided with the release of the Tim Burton film (which meant that my 1989 Batman figure met my 1990 Bart figure and Prince’s ‘Batdance’ was replaced by The Simpsons Sing The Blues by early 1991). This cultural cachet was derived partly from its careful balancing of envelope pushing while never going so far that it left the window of cultural and political acceptability; this meant it was a show that could be watched by different audiences in different ways.

In the early to mid 1990s, then, The Simpsons was ascendant. Largely unchallenged, on top of its game, the series averaged viewer numbers over 20 million from 1989-1993, dropping into the teens from 1993-1999. There have been rallies in numbers since, but the downward trajectory continues.

There are several reasons. First, there is just more choice now than there was in 1989: it is harder to command those kinds of viewing figures (though ‘event’ shows like Game of Thrones can still do this). Second, the years of its highest numbers tend to be seen as the years of its best seasons, 1-10. Few people suggest the fifteenth, or thirtieth album by a band is their most vital, so this can partly be explained through tiredness, familiarity, the inability of something that began during the final days of the Cold War to respond as effectively to the new demands of 2019. This is highlighted in a third point, best summed up as the Apu controversy. In 2018, Hari Kondabolu released his documentary, The Problem With Apu, which criticised the show for racial stereotyping and having a white voice actor provide the voice for an Asian character. The Simpsons responded by having Lisa essentially lament how this was ‘PC gone mad’, an almost wilful misreading of the critique and the context. Where the show had been, according to some, a bastion of liberal thought, this suggested an inability to adjust to new norms. Fourth, the success of the show made space for competitors: South Park (1997-present, currently on its 23rd season) and Family Guy (1999-present, currently on its 18th season) in particular, by virtue of not being on a broadcast network, have been able to take the baton from The Simpsons and go further than it could, or would, go.

Yet The Simpsons endures. It is now, without question, an American institution whose catchphrases and icons have entered our shared cultural consciousness (initially a little sniffy about the show, my Dad now has a Homer Simpson mug). That it is now, in places, problematic is clear; such are the problems inherent in ageing creators being outstripped by the culture to which they still contribute. Keeping the concerns in mind, it’s still worth taking some time to go back to those classic episodes. Familiarity may have bred a little contempt by now, but we have to remember why the show is still going: it has scaled heights of humour like few other TV series.

Dr Michael Goodrum is Senior Lecturer in Modern History, in the School of Humanities.