The deterioration of Poland’s democracy.

The deterioration of Poland’s democracy. 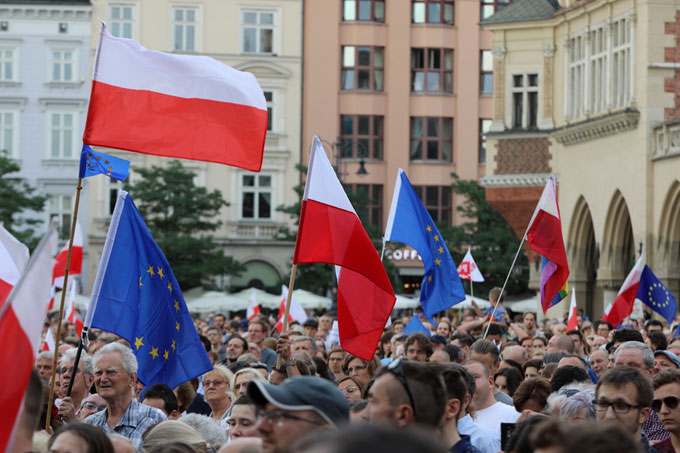 Dr Philipp Köker explains that the President’s veto is unlikely to stop the deterioration of Poland’s democracy.

The Polish president, Andrzej Duda, has announced that he will veto two highly controversial bills aimed at reshaping the country’s judicial system.

At first glance, this may appear as a success for thousands of Poles who protested for weeks across the country and abroad. However, even though the president’s veto can only be overridden by a 3/5 majority in the Lower House of parliament, the veto alone is unlikely to stop the deterioration of Polish democracy.

Since taking office, the Law and Justice Party – whose leader Jarosław Kaczyński has publicly expressed his admiration for the policies of Hungarian Prime Minister Viktor Orbán – has taken it upon themselves to reshape the country’s political system by bringing state media and judiciary under their control.

Shortly after their election in 2015, their government overruled nominations for five constitutional judges that had still been made by the last parliament and later refused to publish a ruling of the Constitutional Court that demanded three of these had to be sworn in by president Duda. Yet Duda, a member of Law and Justice himself, refused.

Subsequently, the government effectively cleansed state media of critical editors and journalists who the party had long accused of biased coverage.

Since then, objective coverage and commentary has been largely absent from public channels. The reform of the judiciary, already at the heart of the party’s programme during its first government in 2005-2007, is now a further step towards an ‘illiberal state’ modelled on the Hungarian example.

One of the two bills now vetoed by the president would have given the justice minister the right to fire the heads of lower courts, while the other would have allowed the government to replace all Supreme Court judges.

President Duda has been complicit in all these changes and so far failed to provide an effective check-and-balance on the government. However, presidential action was inevitable after it emerged over the weekend that the Polish Senate had passed bills in different versions than the lower chamber. Nevertheless, the veto alone is unlikely to put a halt to the Poland’s descent into illiberalism.

The president has only temporarily halted a reform that will inevitably be implemented unless other countries stand together and oppose this attack on democracy.

The EU, which has already threatened Poland with a suspension of its voting rights, will thereby play a key role. However, individual states and their parties also have an important role to play. Although the UK is headed for Brexit, Theresa May must not be indifferent to these developments – in particular because both the Conservatives as well as the DUP have a long history of cooperation with Law and Justice in the European Parliament.

Dr Philipp Köker is Senior Research Fellow in Politics and International Relations at Canterbury Christ Church University. He is an award-winning expert on presidential politics in European democracies. His new book ‘Presidential Activism and Veto Power in Central and Eastern Europe’ has just been published with Palgrave Macmillan.