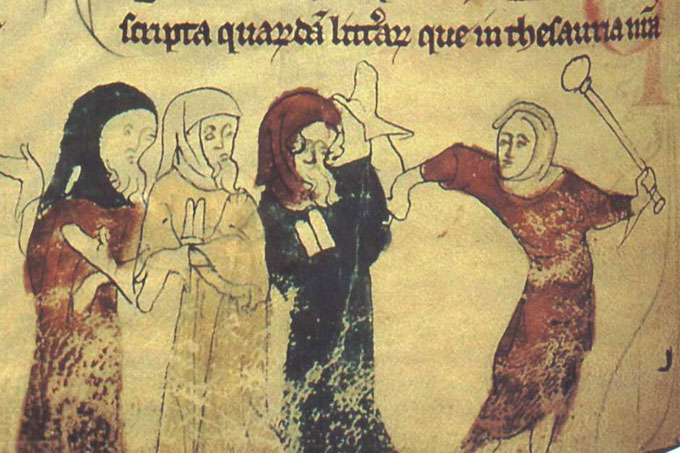 Dean Irwin looks at the historical relationship between England, Canterbury and the Jewish Community.

The discovery of an execution cemetery on the outskirts of Andover, Hampshire, raised many questions, one of which was, apparently, ‘could they be Jews’? This question arose because, from shortly after the Norman Conquest (1066) until the general expulsion of the Jews from England (1290), there was a Jewish presence in England, including, by the mid-thirteenth century, at Andover. That community was expelled in 1275 when Edward I’s famously formidable mother, Eleanor of Provence, obtained permission from her son to have the Jews expelled from her dower towns. In discussing this question, wider questions about the Jews in Hampshire (notably at Winchester) and the execution of Jews during the thirteenth century were raised.

Last July I journeyed to Winchester to talk with Raksha Dave about the Jews of medieval England for the current Channel 4 series, Bone Detectives: Britain’s Buried Secrets. Much of the conversation centred upon the so-called ‘coin-clipping pogrom’ which encompassed England in 1278-9. This saw many Jews (most of them, falsely) accused of snipping the edges off coins for the silver, which could be used to make other coins or objects. At London alone, the Pipe Roll for 1278-9 reveals that the 269 Jews were executed on this charge, compared to 29 Christians. Such was the extent of the false accusations levelled against the Jewish community that by 1 May 1279 the Crown ordered that any Jew who had not already been accused, would face a fine rather than the gallows.

To view relations between the town and Canterbury and the Jewish community through the lens of this one event, however, would be to give a grossly distorted version of the Jewish experience in medieval Canterbury. Indeed, relations between the two communities seem, generally, to have been positive. During the twelfth century, for example, Jewish community supported the Chapter of Christ Church against Archbishop Baldwin of Forde during the Hackington dispute (1187-8).

The coin-clipping pogrom affected Jewish communities across England, including at Canterbury. Two letters in Canterbury Cathedral Archives demonstrate this. Issued by the Crown, directing the recipients to excommunicate any individuals who sought to claim the goods of executed Jews. These were, presumably, issued, because, following their execution, all property and goods should have been transferred to the Crown, which suggests that that process was not adhered to by the some in the local community.

Equally, the witness lists of the Anglo-Jewish charters held in the Cathedral, as well as the Muniments of Westminster Abbey, hint at strong relations between the Jewish and civic community.

That is not to say that, there weren’t tensions between the two communities, and these occasionally escalated into violence. In April 1264, the forces of Gilbert de Clare, Earl of Gloucester, swept through Canterbury to attack the Jewish community, though it is unclear whether the citizens of the town joined him.

As has already been noted in the case of the Hackington dispute, there is substantial evidence of the interaction between the religious houses and Jewish community. For much of the thirteenth century, St. Augustine’s abbey seems to have been perennially indebted to the Jews. Moreover, some of the best evidence that survives for the physical location of individual Jews in medieval Canterbury comes from after the Expulsion. At that point, all the Jewish properties in England defaulted to the Crown and Christ Church received advice on how to get a royal licence to take possession of those properties and a list of those houses which were obtained has survived, listing the extent of the property, the Jewish owner and the new Christian owner, as well as their annual value.

It lists that Elias of London, for example had held a house, with a solar, worth twenty shillings which was taken into the hands of the nunnery of the Church of the Holy Sepulchre (Canterbury). It is particularly lovely that a roll produced fifteen years later, the houses were still being identified with their former Jewish owners.

These, and other documents, will be displayed in the Canterbury Cathedral Archives as part of a series of events to commemorate Holocaust Memorial Day on 27 January 2020. For more information visit here.

Dean Irwin is from the School of Humanities. You can watch him speak about medieval Jews on the Channel 4 series the Bone Detectives on Saturday, 25 January 8pm.