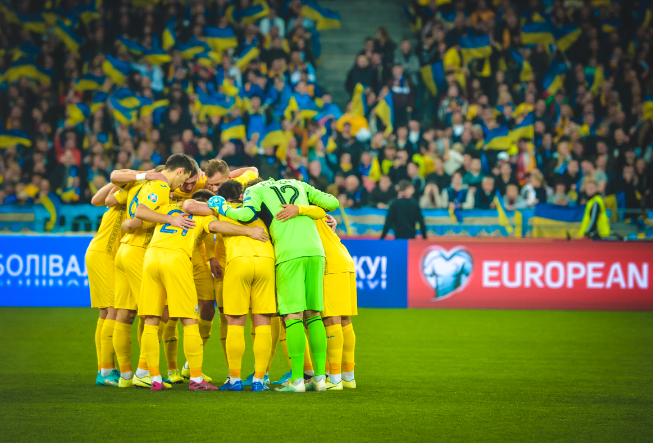 Ukraine has issued a controversial new football strip for the Euro2020 championships that kicks off today. The inclusion of a map of Ukraine incorporating Crimea has angered ministers in Russia, whose annexation of the peninsula in 2014 drew international condemnation. The large map on the front of the football shirt (which lights up in the team’s promotional video), was originally accompanied by slogans ‘Glory to Ukraine!’ and ‘Glory to the heroes!’ printed near the collar that fuelled further accusations that the national strip is a provocative geopolitical statement.

Following complaints from Moscow, Uefa has since ordered the removal of the phrase ‘Glory to the heroes!’ due to its military connotations, but has allowed the map to remain in place as it shows UN-recognised borders.

Politics, tribalism and identity are inherently woven into the fabric of football, particularly at international level. The sport’s popularity and its potential to draw on such a wide emotional gamut promotes national unity and solidarity, while governing bodies such as Uefa strive to ensure that political symbols have no place in football. In 2016, Fifa fined England, Scotland, Wales and Northern Ireland for using the poppy to commemorate Armistice Day, which the world governing body considered to be a political symbol.

What it surprising, therefore, is Uefa’s decision to approve Ukraine’s football shirt in the first place and their continuing belief that maps are apolitical. Maps are instruments of power: far from being objective or passive artefacts, their selective views have agency to change the way we see the world. They have long been used as expressions of national identity, often as simple shapes or outlines of national borders. The Soviet Union, for example, utilised a symbol of its outline for promoting solidarity amongst its vast territories and as an icon of global communism. Unlike most other national symbols, such as flags, maps go beyond representing the idea of a nation by making an explicit statement of its territory. Some nations make use of both; Kosovo, for example, incorporates a map within its national flag.

International football provides an opportunity to showcase talent and to bring people together. Without adequate regulation, however, it also offers an arena for proclaiming political messages to a worldwide audience. Although Russia’s annexation of Crimea is not recognised by the United Nations, Ukraine’s inclusion of a map incorporating this territory on their national team’s shirt is as much an outward display of a political message as it is an embodiment of their national expression of space. The extent of its influence and legacy, both on and off the pitch, is yet to be seen.

Regulatory bodies, particularly those who are intending to ensure political neutrality in sport, must grasp the idea that maps are political symbols. As such, they can be highly emotive agents in promoting a political agenda – something which Ukraine and Russia clearly understand but Uefa fail to recognise.

Dr Alexander J. Kent is Reader in Cartography and Geographic Information Science in the School of Psychology and Life Sciences. His teaching and research incorporate geopolitics and European geography as well as GIS and visual communication.