Banksy, Brexit and the star of Dover 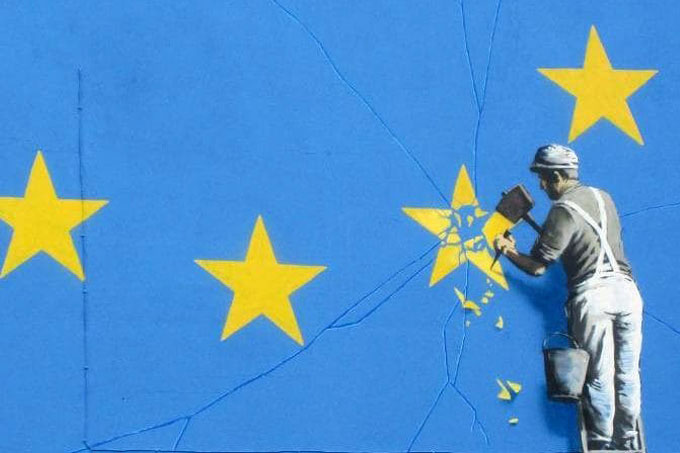 Moments before arriving at Europe’s busiest ferry port, thousands of drivers saw a new side to Dover this weekend. The historic town has started to attract some extra visitors, thanks to a striking 40-ft-high mural that has mysteriously appeared beside the A20 in full view of those bound for the Channel. Pilgrims began to gather at the base of the mural on Sunday morning to admire the monumental artwork and in the afternoon, it was confirmed that the world-famous guerrilla artist from Bristol was responsible for Dover’s latest attraction.

Banksy’s latest mural depicts a huge EU flag and a workman on top of a ladder chipping off one of its bright yellow stars with a mallet and chisel, causing cracks to spread across the rest of the flag. The message is clear, its timing is impeccable, and the choice of location could not be more symbolic. Where you say something is often just as important as what is said, how, and when.

Dover may be the ‘Gateway to England’, but it is also the point of return for those heading back across the Channel. Many will witness this powerful, and perhaps prophetic, vision of how Brexit will have far deeper ramifications. The sheer size of the mural amplifies that point; while Art Buff (2014), Banksy’s contribution just up the coast in Folkestone was a whisper, Dover’s new mural is most definitely a shout. Perhaps its location could only have been surpassed by a position somewhere on Dover’s iconic White Cliffs, where it might have offered less of a reminder of fortress Britain than of the fragility of the EU, and, ultimately, of all political unions.

But I believe there is another point to be made here. Dover district has amongst some of the most deprived small areas in the country. The Brexit-inspired artwork is just a stone’s throw from the £53.25 million St James development, an eight-acre site that will comprise new retail and leisure space and is hoped to transform the economic prospects of the town. Heavily bombed during World War Two, the unsympathetic post-war development of the site included Burlington House, an ugly monolith which obscured the view of Dover Castle and was finally demolished in February last year.

Although Brexit will divert attention away from regional and local concerns, perhaps Banksy’s new mural will remind all of us – but especially the residents of Dover – of the town’s iconic significance and will herald the regeneration and prosperity it deserves.

Dr Alexander Kent is Reader in Cartography and Geographic Information Science in the School of Human and Life Sciences and lectures on the Geography programme.

The battle over Britain’s future has just started