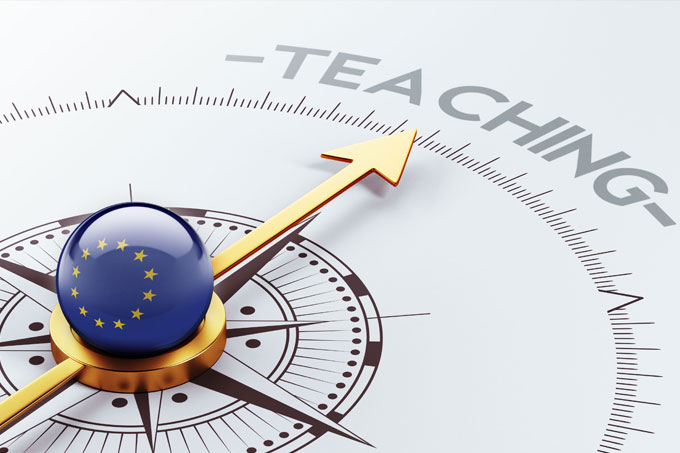 Britain’s current and future relationship with the European Union regularly appears in the news and will continue to ahead of the EU referendum in 2017.

Dr Amelia Hadfield, Director of the Centre for European Studies, explains why understanding the role Britain plays within the EU will be important for us to make an informed discussion come the EU referendum:

To many in Britain, Europe remains a paradox. It’s foreign. It’s a neighbour. It’s part of ‘us’. It’s both reassuringly familiar, and frustratingly different. Familiar as a source of holidays, exchange visits, different food, cultures, places and people to visit. And different as well, from its languages to its landscape, from its currencies to its politics. Ah yes – politics.

Described by British Prime Minister Winston Churchill in 1946 in his Zurich speech as ‘this noble continent, comprising on the whole the fairest and the most cultivated regions of the earth’, Europe continues to vex, puzzle, and attract in equal measure.

Like many other countries, many in Britain feel that they can identify with Europe ‘the place’, and its national societies, far better than they can identify the multidimensional structure of the European Union. For this reason, teaching and learning about Europe, and about Britain’s vital role in European political, economic and social history is so very important. Understanding both the commonalities that Britain and the EU share, as well as the differences that continue to divide them is the first step to an objective, and unprejudiced appreciation of the relationship that spans the Channel. There are fascinating and surprising things to learn and to appreciate. In doing so, we quickly see that Britain has led from the front in developing European integration just as much as it has prevaricated from the side-lines.

With the ‘any minute now’ referendum on British membership looming, and hard upon the heels of a general election in which the EU became a barometer of local and national attitudes, Europe remains in the headlines. We may need a Christmas break from it at some point, but before that happens, Canterbury Christ Church University would like to take the opportunity to open its own debate on Britain’s vocation within Europe. What role can, and should Britain play, in Europe, and within the European Union? We need to go beyond the in/out debate to understand why the attraction of Europe (with 1.5 million Britons living there, it can’t be all bad) doesn’t balance with political support for the EU.

The new Jean Monnet Centre for European Studies (CEFEUS) launches on Friday 13 November at Old Sessions House on the North Holmes Campus, 5.30pm. The Centre aims to provide a hub of interesting, topical and engaging debate on Europe for the University, community of Canterbury, and beyond. For more information about the panel discussion at the launch and the Centre, visit the CEFEUS webpages.