Medieval Pageant and schooling now and then

Having caught up with Dr Claire Bartram, as Co-Director of the Centre, and Dr Diane Heath, the Centre’s Research Fellow, I thought I would report on their involvement with the forthcoming Medieval Pageant on Saturday 4 July (the closest Saturday to the Translation of St Thomas on 7 July), which this year will be a virtual experience: https://www.canterburybid.co.uk/canterbury-medieval-pageant/ . Working with the Medieval Pageant team, Claire has been liaising between them and the Creative Writing staff and students at CCCU on some short creative pieces that relate to Thomas Becket.

Professor Champion and the Making of the Modern Landscape

Having attended the third Lambarde Annual Archaeology lecture last night, I thought I would concentrate on it for the blog this week.

Lambarde, Baedeker and Tithe at Canterbury

Being back in Canterbury this week, I am now turning my attention to future Centre events, especially those due to take place in the next couple of months.

Canterbury Museum – at a crossroads

Due to it being half-term last week, I took the opportunity to visit the Canterbury Heritage Museum because now it is shut again for another month until the Easter holidays. Consequently, several of the photos this week are of the museum and link in some way to the twin themes I want to mention this week: travelling and communities.

In some ways the theme this week is the distinctive nature of Kent culture, or at least that the particular nature of the county led to the production of a fascinating archive and finally that this, too, had a bearing on a certain Canterbury institution.

Bell Harry in Canterbury and a Cambridge play

This week I’m going to start in mid sixteenth-century Cambridge because yesterday I was leading a seminar on a comedy entitled Gammer Gurton’s Needle that was probably performed at Christ’s College during the reign of Edward VI. According to the notes provided by a modern editor, the play can be seen as commenting on such contemporary issues as poverty, vagrancy and religion, and while I would not totally discount these ideas, especially religion, I think probably more pertinent are matters relating to gender and cultural divisions between town and countryside. Thus for the Cambridge dons and scholars who would have comprised the main member of the audience, the writer presumably drawn from among their number, the ignorant, superstitious and generally pretty stupid rural dwellers were in marked contrast to themselves and so ripe to become the butt of the jest concocted by Diccon, an ex-inmate of Bedlum. Yet perhaps even more indicative of this perceived gulf between educated, sophisticated urban dwellers and their poor country cousins, which has been a stock-in trade of many writers over the centuries, is the gender difference between actors and audience, and the objects of their mirth. For discounting any female servants who would have been at the back (low) end of the hall at Christ’s College, everyone else there would have been male and the prospect of seeing two scholar-actors in their late teens and dressed as elderly countrywomen battling it out on stage over a lost (‘stolen’) needle would have reinforced ideas about the ridiculousness of these granddames. And yet such women in their own rural communities would often have been seen as the holders of the community’s knowledge and memory, as midwives, as independent businesswomen (running the local alehouse) and as the custodians of local custom. Consequently such a play may be seen as symptomatic of early modern patriarchal society. 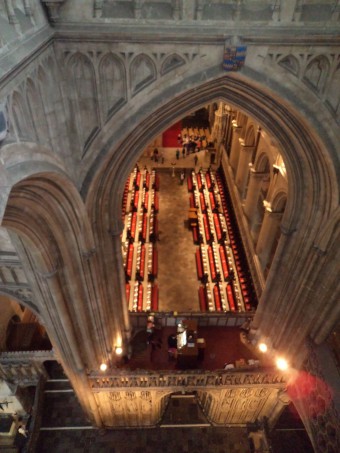 As a way of engaging students’ interest in this ‘broad comedy–and an utterly trivial subject’, I split them into two groups with each set the task of producing a ‘play’ using as the plot line depositions from a contemporary church court case, a method that may indeed have inspired the original play. In both scenarios a woman’s honour was at stake, a matter of considerable importance in Elizabethan society which could affect her socio-economic standing, and its loss might have devastating consequences. Briefly, the first of the two Canterbury cases involved Goodwife Osborne’s meeting with Wallop at the back of her house, her husband already being in bed, and a second late night meeting which also lasted about fifteen minutes in Wallop’s chamber, Wallop apparently being one of three lodgers with Master and Mistress Osborne. The second case involved contradictory statements from several witnesses regarding just what Margaret Raven had been doing early in the morning at harvest time. The worst case scenario, and thus most damaging to Raven’s reputation, was reported by Margaret Richardson. She was said to have told others that morning that she had seen Margaret Raven and a man in Barton Field who ‘had plaid the whore and knave togither’ after which the man had crept away before ‘whipping over the hedge’, while Raven had gone along the hedge as far as the chantry stile and there ‘whipped over as she said’. This latter case, in particular, may be viewed as juxtaposing the rural (it took place in St Paul’s parish in Canterbury’s suburbs beyond the city’s liberty) and the bestial with similarities, as portrayed in Gammer Gurton’s Needle, to the countryside around Cambridge, but perhaps just, or even more importantly, it concerns a hierarchy based on gender.

This brings me to a case I decided not to give to my students which might be said to have more in common with the disturbing revelations from Oxford, Rotherham and elsewhere that have been in the press in recent months. The Canterbury case was recorded in 1571 in the city’s courts where Joane Bellinger, a fifteen-year old servant of a local tailor stated that ‘Steven Jeffrey hir master on munday last past at night being the xixth day of november aboute vj of the clock hir dame then being at supper at Goodman Somers house bad hir this deponent to come to him and when she was come to him the said Steven did take hir by the arme, and then did cast hir vpon the bed in the parler of his howse and then he shued his privy partes vnto hir and then pulled vp hir clothes and wold haue put his yard into hir’. Although she managed to escape, he pursued her and the rape itself took place on this bed in the parlour during which she tried to defend herself but was obviously so frightened that ‘she did neyther crye owte nor call for helpe to anye nor did complayne to any of yt, and she saythe that she did tell him that he did hurte hir, and he said no Joane I do not hurte the, for this dothe me good and thee no harme, and she saythe further that the said Steven hir master caused this deponent to sweare that as gode shuld iudge hir she wold nether tell ffather nor mother nor any other of yt, and she saythe further that the said Jeffrey wold haue had his pleasure of hir twyse or thryse but she with stode yt.’ Just what the outcome of this shocking case was in the courtroom is not recorded, but Joane’s bravery is clearly manifested both through her actions in her master’s house and in her court room appearance and testimony.

For the historian such windows on a distant world are fascinating in their own right in terms of the insights they provide on social relations, the significance of patriarchy and the role of the judiciary, but they also indicate that in some ways human nature does not change, albeit the cultural constructs of early modern society are different from our own. Power relations between individuals can be expressed in many ways, and, of course, not all relate to gender, but looking to the past can sometimes be an uncomfortable mirror of the present however distorted the image as a consequence of time difference. Yet this is not a reason for not looking and the research on Kent’s history that will be on show at the ‘New Directions’ conference on 28 March and the ‘How the Great War changed Kent’ study day on 23 May will demonstrate just how rich the county’s archival sources are for these respective periods. Moreover, these events will showcase the work of a considerable number of early modern and modern scholars who not only wish to share their findings with the academic world, but believe it is important for all to extend their engagement to the wider public.