In some ways the theme this week is the distinctive nature of Kent culture, or at least that the particular nature of the county led to the production of a fascinating archive and finally that this, too, had a bearing on a certain Canterbury institution. These links may seem somewhat tenuous but I hope will become clearer and while it should not be claimed that Kent is unique, it does have some special features that do make it noteworthy. The first of these I came face-to-face with last Sunday when I met for the first time a hooden horse. This ‘creature’ today appears to have escaped from his seemingly east Kent homeland and now can be found in the Weald (and Tonbridge) because I have a reliable report of one having been seen at Frittenden in the last few years. There are probably others in the west of the county as part of this late 20th-century/early 21st century revival but in the 19th century and seemingly up to about the First World War their presence was characteristically in an arc along Kent’s eastern and northern coasts.

For those interested and wishing more information, the internet will provide a number of useful websites and references, including that produced by Bob Jones; and, in print form, there is the The Kent Hooden Horse (The History Press, 2009). This is a new edition of Percy Maylam’s book, first published in 1909, that provides a comprehensive study of what is known about the ‘horse’ and its antics in late Victorian east Kent. Geof Doel, a well-known Kentish folklorist, was one of those behind the republication of this valuable text. 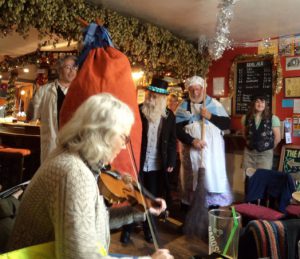 Canterbury Hoodeners at The New Inn

In Victorian Kent, the hooden horse and its attendants – a ‘waggoner’, a rider or ‘jockey’ and ‘Mollie’, an old woman with a broom (played by a man), or some of these with possibly others, and accompanied by a couple of musicians, often seem to have been out-and-about during the Christmas period. Some called at local farmhouses where they danced, sang, and, probably most importantly, collected money, yet the actual type of entertainment provided by the ‘hoodeners’ did vary group to group, but the ‘horse’ was the star. Interestingly, wooden horse heads were nearly always used, in part said to be because real skulls were hard to acquire, and certainly hanging up a wooden horse head in a barn somewhere until the following Christmas would have been far easier. Why a horse is not clear, and this is pure speculation on my part, but as plough animals and as traction animals more generally, horses were more commonly used in Kent from earlier in the medieval period than most regions in the country. Thus, whether this placed a greater spiritual, for want of a better term, as well as a physical value on the horse in east Kent I do not know, but is feasible. Moreover, even though the documentary records are lacking, such horses or their ancestors are presumably part of a very old traditional, oral culture from pre-Reformation Kent that resurfaced, at least in terms of written records, in the 18th century. 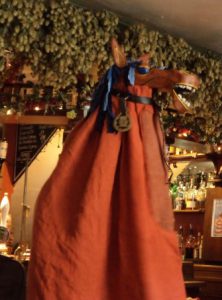 However to return to Sunday’s hooden horse, I met it in ‘The New Inn’, which has been described at Canterbury Christ Church’s ‘local’, because it is situated just yards away from one of the main university entrances. It is one of a small number of surviving inns that are sited in what would have been the parlour (front, ground-floor room) of a ‘two up, two down’ terraced house. This intimate setting was ideal for the audience who gathered round the musicians, but for the ‘hoodeners’ was probably a bit cramped, especially as well as the attendants noted above, the ‘doctor’ was also present. For in this case the ‘Canterbury Hoodeners’ were also performing a play. These folk plays are often called ‘mumming’ plays, although definitions remain complex and often contested. Consequently, I am going to follow Peter Millington’s classification and call it a variation of the ‘Quack Doctor Play’ because, as he says ‘the ‘doctor’ is the one ubiquitous character in these plays that both defines the genre and serves to distinguish it from other folk plays’. However, unlike most of the plays in this genre, there wasn’t a hero/combat element in the usual sense of some form of sword fight between hero and ‘villain’, rather the ‘horse’ – as ‘hero’ or victim – ‘died’ of old age, overwork and from the ‘jockey’ attempts to ride ‘him’. The important point, nevertheless, was that the ‘doctor’, in a comic scene, diagnosed the problem and provided a cure in return for payment. As a result, the resurrected ‘horse’ danced with its companions, who then sang suitable songs before heading off to the next venue, in this case ‘The Bell and Crown’. From a Christ Church viewpoint, the particular element of note was that several lecturers played parts: the ‘horse’ and the ‘doctor’, and were involved generally, while the ‘waggoner’ came from the University of Kent.

My talk at the IHR ‘Locality and Region’ seminar, using the depositions and other documents collected on Archbishop Cranmer’s behalf in 1543 in what is known as the ‘Prebendaries’ Plot’, is the second event, the link being the idea of superstition. Folk plays and similar activities have been labelled in this way in the past, including during the Reformation. It was also one of the terms Cranmer used in his marginal comments on the Cambridge Corpus Christi College manuscript, our only record of the ‘Plot’ depositions. Among the events he categorised in this way was a report by the local, elderly schoolmaster that: Johanna Meryweder of St Mildred’s parish in Canterbury, “for displeasure that she bare to a young maid named Elizabeth Celsay and her mother, made a fire upon the dung of the said Elizabeth and took a holy candle, and dropped upon the said dung seven times; and she told her neighbours that the said enchantment would make the cule of the said maid to divide into two parts.” Obviously very different in form, motives and execution, but it does show how ideas and actions can find themselves collecting uncomfortable bedfellows. 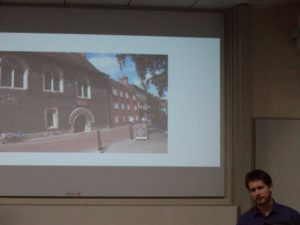 This brings me to my final event, Rob Gainey’s talk last night to the Canterbury Historical and Archaeological Society [CHAS]. Rob did his MA by Research recently at Canterbury Christ Church on the history of Eastbridge Hospital during the early modern period. The link here is the Reformation and the role of two archbishops in the refoundation of the hospital during Elizabeth’s reign. The two archbishops were first Parker and then Whitgift, and among the new developments was a school for poor boys at the hospital. The presence of Archbishop Parker may alert you to a further connection because many Canterbury Cathedral books and manuscripts found their way to Corpus Christi College (see above), and just to finish, even today the hospital’s trustees provide financial assistance for two scholars to study at Cambridge – a gift that now has over 400 years of history behind it.