Professor Champion and the Making of the Modern Landscape

Having attended the third Lambarde Annual Archaeology lecture last night, I thought I would concentrate on it for the blog this week.

Thus, I joined a large, excited crowd who, after the wine reception, poured into the Michael Berry Lecture Theatre in Old Sessions House to hear Professor Tim Champion (University of Southampton). They were not disappointed because Professor Champion’s assessment of the development of the modern rural landscape was fascinating. In particular, he provided a very clear argument that was beautifully worked through to his conclusion regarding the importance of the Middle Bronze Age as what might be seen as the pivotal point in this development. As a historian rather than an archaeologist, and even less an expert in prehistoric archaeology, I was exceedingly grateful that he was indeed so clear in his approach, and it was also interesting to see how he couched it in the historiography from Lambarde’s time in the later 16th century. Although not keeping exclusively to the south east and Kent, because he sees southern and eastern England having shared characteristics, he did draw on many Kent examples, not least because organisations such as Canterbury Archaeological Trust have undertaken or been involved in a considerable number of often large-scale excavations across the county ahead of major road and rail developments, and the construction of the massive Thanet Earth site (visible from space).

To start from the beginning, the factors that Professor Champion was identifying as indicative of a modern landscape are: one largely managed by human intervention; the presence of permanent occupation and sedentary human settlements; farming involving some mix of arable and pasture, and very limited areas of wilderness. He then asked when this came about according to such 16th-century writers as William Lambarde and John Twyne. As he said, Twyne is interesting because he was writing at a time when received knowledge regarding human development was both limited and set within a very short time frame. Yet Twyne postulated such matters as primitive humans clearing an unmanaged landscape for agriculture, the possibility of a land bridge between southern England and France and a changing coastline, albeit he made no attempt to date these.

Moving to the 20th century, Professor Champion focused on the classic landscape history text published first in 1955, W.G. Hoskins, The Making of the English Landscape, because Hoskins took almost no notice of prehistory. Although less damming than Matthew Johnson, Ideas of Landscape (2006), Professor Champion did agree that Hoskins preferred documents and was not interested in archaeological evidence, but he also noted that Hoskins was in some senses seeking to answer different questions, and, more importantly, the 1950s were still, as Tim said, the archaeological ‘Dark Ages’. Indeed, many of the earliest motorways and other major post-WWII building projects involved no archaeological investigations at all, which means vast areas of landscape across England have been lost archaeologically. This has led to the idea that what we have nationally are zones of destruction in contrast to zones of survival. Consequently, if archaeologists and landscape historians do not appreciate this distinction and that many of the former zones are in river valleys and the latter on hilltops, it will be impossible to gain a better appreciation of prehistoric settlement and agriculture, in terms of both timing and development. 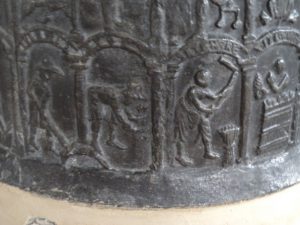 Moreover, as Professor Champion pointed out, while there remain problems with the recent continuing emphasis on developer-led archaeological excavation, in the last two decades a considerable number of Iron Ages sites in the Cambridge region, for example, have become known, or postulated from the evidence. One sector of prehistoric history that has received particular coverage in the literature is the Neolithic, and more especially the transition from Mesolithic to Neolithic, having become known as a key point in the shift to ‘a food-producing economy’. Experimental archaeology has played a significant role, not least through the way stone axes have been used to cut down trees, and thus indicate the role of forest clearance. Ecological features, too, are seen as crucial indicators of landscape change; that is the move from woodland to open field arable and pasture. Among the species Professor Champion discussed were bears, aurochs, wolves – all gone; and arrivals – hares (Middle Bronze Age), starlings (Bronze Age), blackbirds (Iron Age), song thrushes (Iron Age), dung beetles (later Bronze Age, perhaps earlier), house sparrows (common in Later Bronze Age), house mice (Middle Bronze Age) and domestic cats (Iron Age or possibly Later Bronze Age). New crops similarly offer valuable information, and the development of spelt wheat that meant the production of raised bread and the construction of ovens needs to be placed alongside the growing of the Celtic bean in terms of importance of the Bronze Age as a turning point. 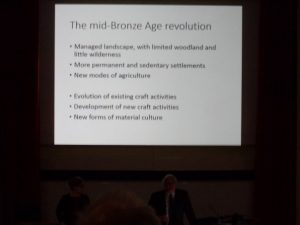 Thus, as you can see from Professor Champion’s final slide, for the purposes of the question he posed at the beginning, the development of the modern landscape with respect to a managed landscape with limited woodland and little wilderness should be seen as occurring during the Middle Bronze Age. For it was then that new modes of agriculture came in to being, when settlement and occupation became sedentary and permanent, existing craft activities evolved and new ones were developed, giving rise to new forms of material culture. For those interested in exploring this further, Professor Champion thinks Nicholas Crane has recently published a valuable, readable account (even though it has no footnotes): The Making of the British Landscape. And, as a final aside on the importance of arable farming to the development of the modern landscape, I decided to include a photo (see above) of the labours of the year that is on the medieval font at Brookland parish church. Of course, this is only one of numerous images in manuscripts, bench ends, capitals and other places in medieval art, but by placing it on the parish font the creator and the parish were (and are still) saying something fundamentally important about the relationship between man and the land(scape).

School of Humanities @cccu_humanities @MsAshtonDennis: My article in the newest Dickens Quarterly on Charles Dickens' Jewish step-cousins and some of the issues with the boot-polish factory story https://t.co/QeHFmxFaeQ 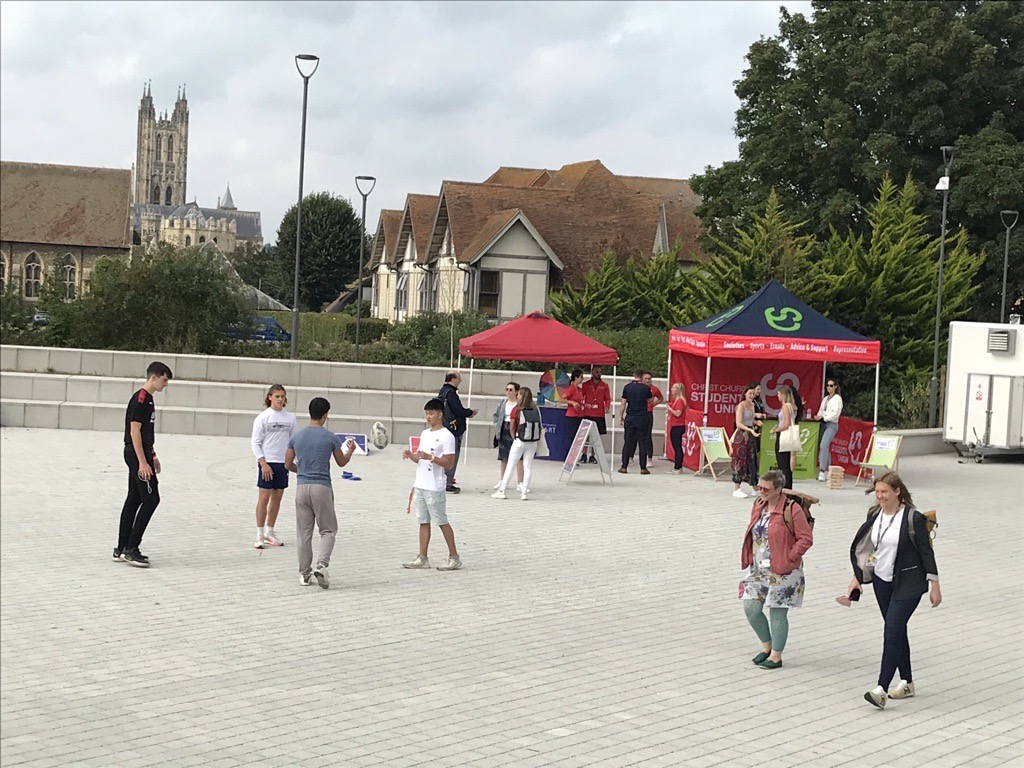