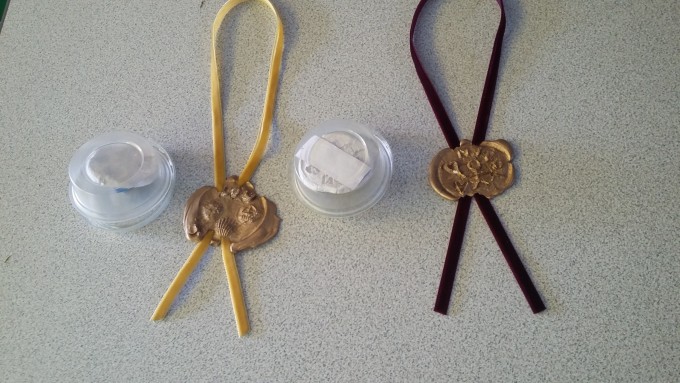 Dr Sheila Sweetinburgh has asked me to write the Centre’s final blog before the summer vacation because I (Dr Diane Heath) have been working on a terrific project with a local school. However, before I turn to the Magna Carta Impact workshops, please allow me to advertise a forthcoming conference for which you can now book tickets. ‘Revisiting sources and themes in parish histories’ is being held in Canterbury on Saturday 21 September 2019 (from 9.30 until 16.30) and it is being co-organised by our Centre for Kent History & Heritage, the University of Kent, and Warwick University’s Network for Parish Research. This means that delegates will have access to the top researchers on churchwardens’ accounts and other parish records and will have the chance to put questions to these experts in parish history at the plenary panel session. Parish records are often vital sources for religious, political, socio-economic, and cultural history as well as for micro-histories and genealogy. There is also a chance to visit Canterbury Cathedral Archives to examine documents relating to churchwardens and parish history which are not normally on display. For the programme please click here: https://www.canterbury.ac.uk/arts-and-humanities/events/arts-and-humanities/ckhh/revisiting-sources-and-themes-in-parish-histories.aspx but if you already have all the details you can skip to the booking page here https://www.canterbury.ac.uk/event-booking/book.aspx?event=217605. We very much hope you will be able to join us for this cutting-edge research event. 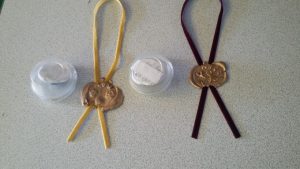 As Sheila reported, at the end of June I was very kindly invited to visit Royal Harbour Academy by Headmaster, Mr Simon Pullen. I was to deliver two workshops for Year 7 schoolchildren on Magna Carta, and more specifically about the women, children and families affected by the reign of King John, based on Professor Louise Wilkinson’s funded research project on Magna Carta. At these workshops I discussed the impact of John’s cruel treatment of noblewomen, like Matilda de Briouze who, on John’s orders, was starved to death with her eldest son, possibly at Windsor Castle. John’s two wives, Isabella of Gloucester, and Isabella of Angouleme also suffered – the first was ditched and later hawked off to the highest bidder, forced to marry one of John’s cronies. His second wife was married aged 12, not then unusual but John, to ensure she did not return to her first betrothed, consummated the marriage. We also covered how John took child hostages, like five year-old William the Marshal; how Alice of Ashburnham had to ‘purchase’ the custody of her own son by paying John 4,000 marks (over £972,000 today); and how John was widely believed at the time to have murdered his own fourteen year-old nephew, Arthur, after the boy was captured at the Battle of Mirebeau. We also discussed another woman who upheld King John and was the keeper of her own castle; Lady Nicola de la Haye, Castellan of Lincoln Castle defended it ‘manfully’ (according to the Dunstable Annalist). Fighting off a French and rebel siege in 1217 until the arrival of William the Marshal, Nicola ‘saved’ England from the French. 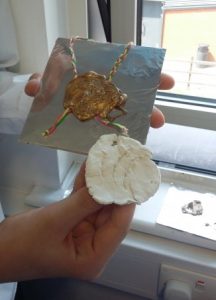 We then looked at some of the key clauses of the Magna Carta involving women and families and then the pupils wrote clauses for their own Magna Carta. The pupils were so thoughtful and sensitive; they wrote about modern issues such as homelessness, lack of food, slavery, and violence in the home, and they considered medieval life too, wanting to stop child hostage-taking, rape, pillage, and extortionate taxes. Each clause had to be agreed by each member of their small groups and this led to some interesting discussions, for example at what age children should be allowed to vote. 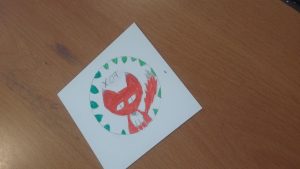 One of the many great designs produced by the students

In the second part of the workshop, the children drew their own seals and then carved modelling clay to their own designs. Medieval seals were used as identification, as forms of self-representation and identity because they represented the holder’s power, land, and family – coded in motifs and heraldry. Because the seals were to accompany their own Magna Carta clauses, the children were then asked to think how they would represent themselves and their family. 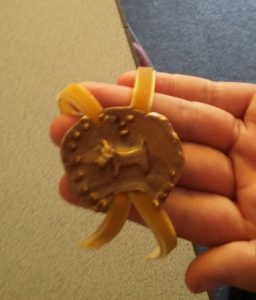 Another of the many brilliant seals

It was a pleasure to see how the children concentrated on the task, thinking about how they might work in ideas from medieval themes, heraldry, such as using the seal shape of medieval noblewomen, and their own lives, by using sea-shells (appropriate for a school in a coastal town) but also representative of pilgrimage, so important in medieval lives. One boy’s design read his name with the motto ‘Sword + Justice’, another made a most striking design of lion clawmarks across a shield, other children incorporated modern items and tags, and pets (a terrier inside a heart), one read ‘Nan’, another ‘love.’ One girl, picking up on animal canting terms in medieval heraldry, produced a beautiful drawing of a fox, another designed a seal for a medieval countess featuring a lily, and one took the image of the 2015 Nicola de la Haye re-enactor and fashioned a seal incorporating Nicola with Lincoln Castle in the background. 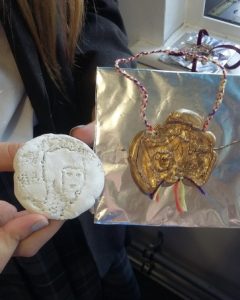 The seals needed to be air-dried, so the second set of workshops was held this week, just before the end of term. In these workshops we examined some of the historiography surrounding Magna Carta and how views of King John have changed over the centuries, from the criticism of thirteenth-century monastic chroniclers, to the positive views of John in the Tudor Reformation period and negative Victorian ones, and finally the changes in historians’ views from this and the previous century. We then examined the death scene from the sixteenth-century Reformation play King John by John Bale, where the king is depicted as a proto-martyr standing up to the Pope, ‘a valiant and godly king.’ We held a script-in-hand performance with suitable mini props (headgear such as a cowl for the monk Simon of Swynsett, a crown for John, and a large mitre for Stephen Langton, Archbishop of Canterbury). Some of the children proved to be excellent actors, enjoying John swallowing ‘toad poison’ and stage-dying with aplomb. 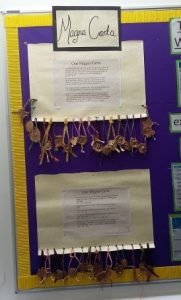 However, the focus was on using the children’s seal moulds to produce gold wax seals on their choice of silks or ribbons, many chose to plait their chosen silk threads to make their seals even more personal. A large pot of melted sealing wax allowed each matrix to be impressed – and results were indeed very impressive. The seals were then attached to the children’s Magna Carta clauses, and pinned up on the wall, adding to their work on human rights, and to their work on medieval history. This project allowed the children to consider the latest research on Magna Carta and explore themes and resonances of power and authority and family issues. The RHA pupils were fantastic, a credit both to their school and to their brilliant teachers, Jenny and Cathy, and I learnt a great deal from both the children and the staff, including the Head of History, Richard and deputy Head Alex. I am very grateful for this opportunity and I hope links with the school and the Centre can be developed.