Kent History Postgraduates and Sources and Themes in Parish Histories.

Kent History Postgraduates and Sources and Themes in Parish Histories. 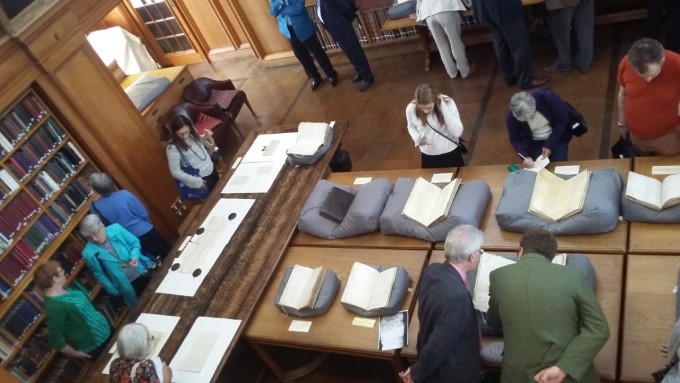 I am hoping that there will be two blogs this week, I’m covering the Kent History Postgraduate Group’s first meeting of 2019/20 and the ‘Parish Histories’ conference, while my colleague Dr Diane Heath has reported on the Medieval Education Day where the Centre contributed a very successful workshop for students from Gad’s Hill School on Thursday.

So to begin with the postgraduates, the first presentation was given by Jacie Cole who some of you may remember is studying rural communities in Kent during the Second World War through the theme of food. This time Jacie concentrated on two books as a way of exploring how historical narratives about food can inform her research. To begin she looked at the works of Marcel Proust as translated in In Search of Lost Time to examine how he had used recollections from his childhood in what is called ‘involuntary memory’, in other words how events are recalled through the senses, especially the sense of smell. In the example she used the mnemonic device or trigger was eating a madeleine with a cup of tea, and Jacie had brought along some of these cakes although no one was drinking tea! 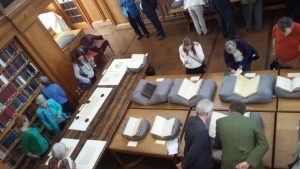 Having explored how such triggers are thought to work, as well as discussing how such sensory experiences have been used by a variety of researchers through ideas about the social construction of such sense memories, particularly as they relate to food, Jacie then went on to her second example. This is a book entitled In Memory’s Kitchen. A Legacy from the Women of Terezin that has been called the cook book from Hell because it comprises recipes and other notes about food, cooking and eating that were gathered together by a Jewish woman called Mina in what was essentially a Czechoslovakian concentration camp where the inmates were seriously undernourished or starving. In these horrendous conditions, the women developed a system they called ‘cooking with the mouth’ where they talked about food constantly, discussing the correct ingredients, and ways of cooking and serving, jotting down whatever they could on scraps of paper.

The whole experience was obviously harrowing for those involved and the subsequent history of these collected papers was also a very difficult journey. This book had obviously affected Jacie emotionally, which is hardly surprising, but she also wanted to share with the group that its creation had, like Proust’s recollections, come from food, albeit in this case imagination was equally tied up with memory. Such ideas about the role of food as a potential trigger, especially for childhood memories, looks very promising and Jacie is intending to find a way to draw on this when she talks to groups, possibly using WWII recipes as the sensory trigger mechanism. This provoked a considerable discussion, not least several members drew on the recounted memories of their parents, especially in terms of rationing. 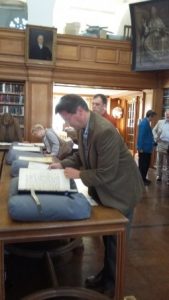 Moving away from food, the second presentation was by Rebecca Jarvis who is working on the lesser aristocracy in Kent and Lincolnshire, and on Wednesday she highlighted her research on the naming practices among this group in thirteenth-century Kent. Using a sizeable number of families, Rebecca discussed the naming patterns for eldest sons and compared these to the practices used for their younger brothers and how for the eldest this predominantly followed the paternal line but was far less clear cut for their younger brothers. Such a desire to keep the dynastic name for sons, which often went back to a specific ancestor might have been seen as just as important in some ways as the family’s lands, a relationship that placed the family in the landscape both in life and death (naming on tombs).

Rebecca has been investigating these different patterns to see if she can identify any female agency, especially by mothers, and this naming of younger sons more frequently ‘borrowing’ names from the maternal line she feels may be indicative of such agency, as in the case of the use of Stephen in the Cobham family. Yet she has not found large numbers of such deployment of the maternal line in terms of sons, but for daughters this seems to be more common, albeit less so for the eldest daughter. Nevertheless, the Auberville family did employ the mother’s or grandmother’s name on occasion but at times, as Rebecca acknowledged, it is difficult to know where the impetus may have come from because of the small pool of names used – there are just too many Johns, Henrys, and Richards, for example. 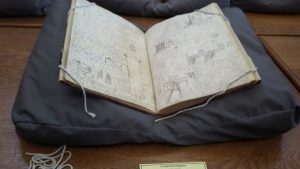 One of the volumes on display (photo Diane Heath)

Daughters names can pose similar problems, but Rebecca has found some unusual female names which would suggest the far greater importance of transmission through the mother’s line, including the names of maternal aunts and similar relations. Such a detailed appraisal of these naming practices similarly produced a wide-ranging discussion, and among the points raised was what role or influence did godparents have in such naming; and if there is any evidence that families drew on the names of their overlords as a means to cement relationships. During the discussion, Rebecca also highlighted the document types she has looked at, including the differences between her research in Kent and Lincolnshire. As I hope you can see, we were very fortunate to have two great presentations to kickstart the year and for October we shall turn to Janet Clayton and Peter Joyce but for now I’ll go to the ‘Parish Histories’ conference.

The day began with an exhibition in the cathedral archives and library where people were able to get a close look at a wide range of parish materials, not just churchwardens’ accounts. For example, parish officials often had to deal with property owed by the church, administer charitable trusts that, too, might involved landed assets, and provide poor relief, all of which required the keeping of records that historians today see as a gold mine concerning research into these parish communities. 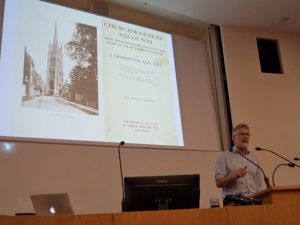 After this excellent introduction, the group headed to Old Sessions House where after refreshments everyone gathered in the lecture theatre to hear Dr Andrew Foster welcome people to this conference on ‘Revisiting sources and themes in parish histories’. As Andrew said, it was great that Professor John Craig from Canada had been able to come, and he did not disappoint because he provided an excellent lecture on what we can learn about how congregations responded to the various demands on them by monarchs and their senior churchmen over the Reformation period. As his way into the subject, John drew on what we know concerning the books bought, held, used, altered, repaired and perhaps even discarded by churchwardens over this period, for although very, very few of the actual books have survived, by looking at churchwardens’ accounts much can be deduced about what had been in many parish churches. This was fascinating, and I was really struck by the co-operation between parishes that he mentioned where a specific book that was required and its presence (or absence) noted at a visitation, might be borrowed by another parish just to cover such occasions. 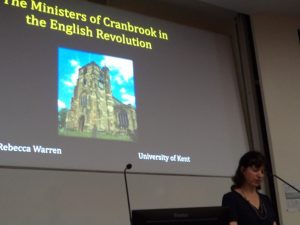 John also explored matters relating to soundscapes in the parish church and the presence or absence of hat pegs, but I’ll pass on to the second talk which was given by Dr Rebecca Warren (University of Kent) who provided us with an intriguing case study about the fortunes or otherwise of various clerics in 1640s and 1650s Cranbrook as they sought to minister to what for some was an unruly and at times downright hostile congregation. As Rebecca said, this is a period when church record keeping was hardly at its best, yet by using a broad range of sources and several important record series from Lambeth Palace, she has been able to investigate what might be called a hotbed of non-conformity that the parochial authorities in many ways were unable to contain or control. Like John, Rebecca was able to draw out a fascinating narrative about how parishes responded during crucial periods and these two excellent presentations offered the 50-plus audience a great morning session.

After lunch, Professor Kenneth Fincham introduced our next speaker and Trevor Cooper (Ecclesiastical Society) set the question – ‘what more might parish records tell us about early modern communion practice?’ The answer, as you might expect, is quite a lot, including possibly how much wine was consumed per person at communion – a not insubstantial amount being on average an eighth of a pint. He also discussed how communion was taken in various parishes at the time using a combination of evidence – the books found in parishes, churchwardens’ accounts, seating plans, parish furniture and the layout of the church itself. As he said, this is where databases such as that for the churchwardens’ accounts and the clergy can be so useful, which was a great way to move on to the next presentation. 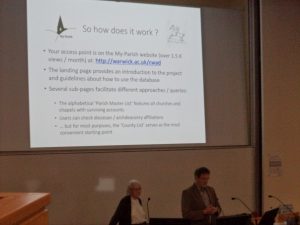 Valerie and Beat show the database to the audience

In many ways the day had been designed to celebrate the new ‘home’ of the churchwardens’ accounts database at the University of Warwick. The driving force behind the database is Dr Valerie Hitchman, while Professor Beat Kumin is the key person at Warwick, with Nick Edwards on the IT side. Consequently, even though Nick could not be at the conference, it was fitting that the last of the formal presentations was a joint venture by Valerie and Beat to introduce the audience to the scope, value and versatility of the database, which will grow as Valerie continues her research. Valerie first provided a short account of how this had all come about before they demonstrated various pages, links and other features to be found at: https://warwick.ac.uk/fac/arts/history/research/parishnetwork/projects/cwad/

and finished by encouraging the audience to try it out. 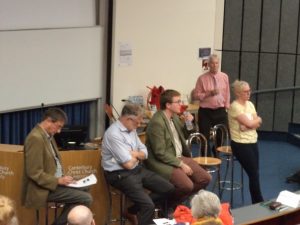 Following a final refreshment break, again provided by CCCU Hospitality who had done a first-class job throughout the day, everyone gathered in the lecture theatre for the panel plenary session chaired by Andrew Foster, and including Dr John Reeks, as well as many of the speakers from the day. To start things off, Dr Natalie Mears from the University of Durham introduced the project she is working on and Dr Adam Chapman did the same for the VCH. Beat provided more ideas about where next, as did John Reeks, and then Andrew opened it up to the audience for questions, comments and suggestions. This led to a wide-ranging discussion with many people chipping in, which I think is indicative of just how much people had enjoyed the day, found the papers stimulating and were keen to get involved. Indeed, this had been evident at the coffee breaks and at lunch time – always a good barometer of a successful conference.

If you would like to get a flavour of what took place today, please do have a look at #ParishHistories and @medievalcanter I would just like to end by thanking all the speakers, Ken Fincham for his help, all those at the archives, especially Daniel Korachi-Alaoui, CCCU Hospitality, Housekeeping and the IT/AV team, especially Laurence Ranger, the splendid audience, and most especially Diane Heath who as always was an absolute stalwart. So Valerie, congratulations on the database and for finding it this new, splendid home at Warwick. 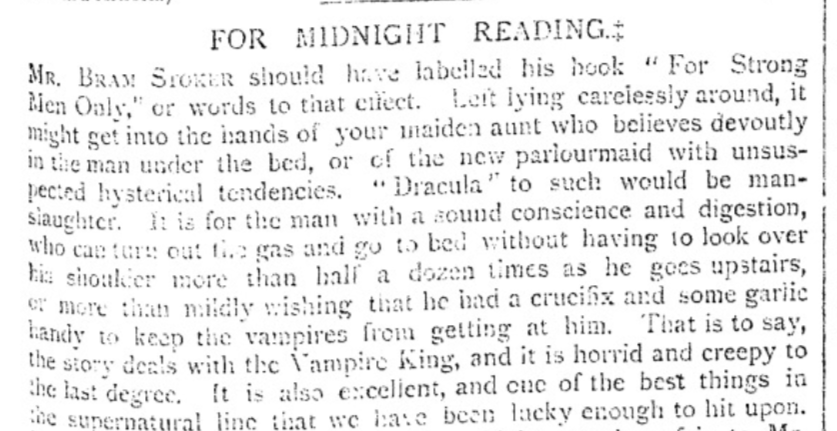 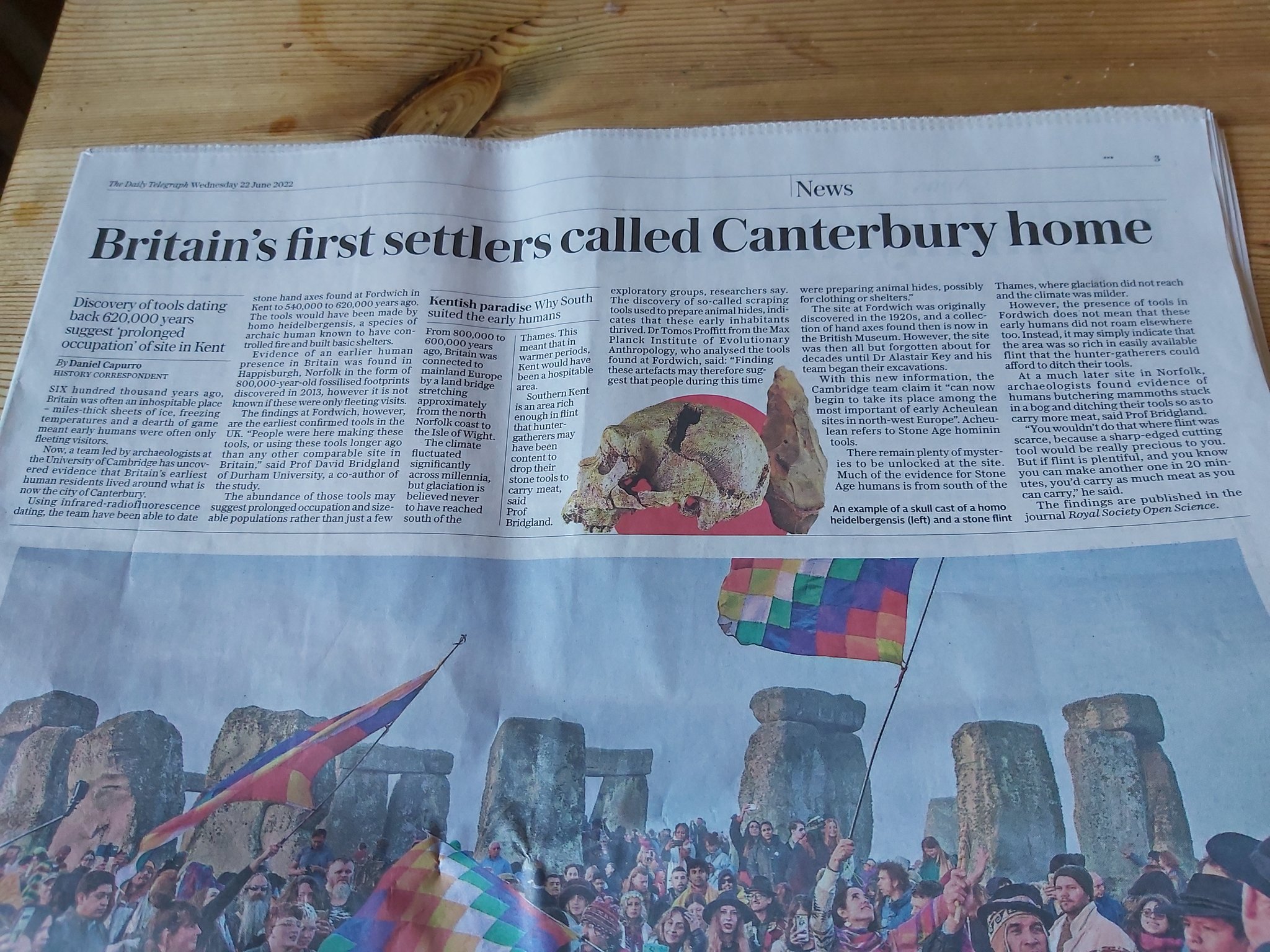 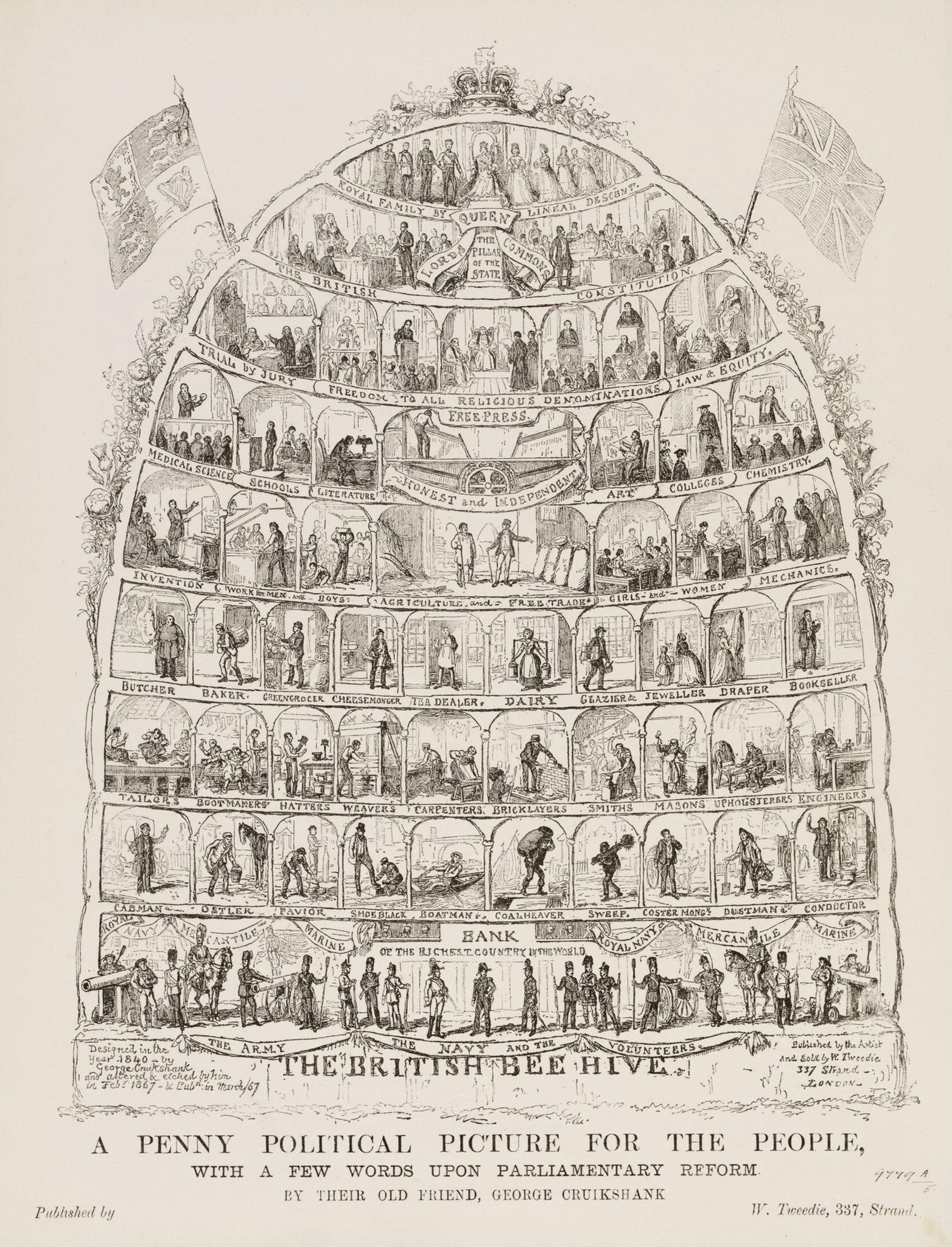