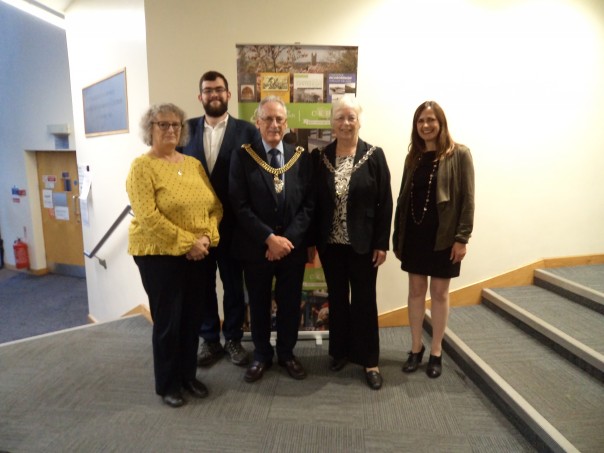 Having had churchwardens’ accounts last week, I thought I would mention that this Saturday another church record will be celebrated in Kent when the diocesan records of Canterbury and Rochester will be the subject at the Kent History and Library Centre conference in Maidstone. I’ll be exploring wills and lay piety in the Middle Ages, there will be three speakers from the University of Kent: Professors Kenneth Fincham and Catherine Richardson, with Timothy Brittain-Catlin, as well as Dr Paula Simpson (Wren Library, Trinity College, Cambridge), whom some of you may remember from the ‘Tithe through the Ages’ conference of a couple of years ago: https://blogs.canterbury.ac.uk/kenthistory/celebrating-canterbury-conferences-and-paul-bennett-mbe/

However, for this week I have two exciting events, firstly the Nightingale Lecture, and then the opening talk of the winter series of lectures organised jointly by the Centre and Friends of Canterbury Archaeological Trust [FCAT]. To begin, on Tuesday evening staff, students and members of the public enjoyed the wine reception in Old Sessions before trooping into the Michael Berry Lecture Theatre. Having welcomed the Lord Mayor and Lady Mayoress of Canterbury, CCCU’s VC Professor Rama Thirunanachandran and the 70-strong audience, I started by saying it was excellent that the Centre could make four Ian Coulson Memorial Postgraduate Awards that evening. For through such Awards Ian’s name is remembered, and these are a fitting tribute to one of the best innovative and truly inspirational teachers and educators in history that Kent has ever had.

Therefore, it was great that the VC had agreed to give out these Awards and as you can see three of the winners were present: Tracey Dessoy (researching the women of knightly and merchant families of Canterbury and its hinterland in the Middle Ages); Dean Irwin (the place of the Jews in 13th-century English society, including the Jews of Canterbury), and Jane Richardson (the rise and fall of three Kentish religious houses which Cardinal Wolsey appropriated in the ‘Little Dissolution’). Rebecca Jarvis was unable to attend because she lives in Lincolnshire. She is working on a comparison between knightly families in thirteenth-century Kent and Lincolnshire, and like most of the others is supervised by Professor Louise Wilkinson, who was in the audience.

Following the presentations of certificates, Dr John Nightingale gave a brief resume regarding why and how the Michael Nightingale Memorial Lecture had come about, especially how it honoured his father who had been the driver behind the establishment of the Agricultural Museum at Brook. The Museum of mainly horse-drawn agricultural implements and other equipment, right down to a great collection of hand tools in the oast house close to the magnificent late-fourteenth-century barn which houses the larger equipment, is, as John said, an important collection. Consequently, John urged those in the audience who hadn’t seen it to think about visiting, either during the summer months when it is open at weekends, or by arranging a special tour with the Hon. Curator Brian Wimsett.

This brought us to the main event of the evening, Professor Carl Griffin’s lecture on the Swing Riots of the early 1830s in the southern counties, especially Kent, and their aftermath up to the establishing of the New Poor Law and the dreaded Poor Law Union workhouses. Having offered the likely economic and social factors that brought about the Swing Riots, Carl then described the earliest known event of the protest, that on the night of 25 August 1830 23 or 24 men had broken a threshing machine at Wingmore on the border between Barham and Elham parishes. Although the informant reported a similar attack was planned for the following night at Grimsacre, it didn’t take place. Yet Carl was keen to point out that the 24 August attack predates the previously accepted date in the historiography; and demonstrates the value of careful and detailed archival research into local records.

Such attacks were not confined to the breaking of threshing machines, and Carl believes that activities such as crop and rick burning, and attacks on Irish migrant harvest labourers may even have started prior to the activities of the Elham Gang. Furthermore, these attacks continued into the autumn, apparently fuelled in part by the lenient sentences handed down by the justices of the east Kent Quarter Sessions on 22 October. The justices were generally large landowners, such as Sir Edward Knatchbull, who were seemingly less antagonistic than the actual farmers who were suffering attacks on their crops, livestock and equipment (including the breaking of ploughs on the Isle of Sheppey). More attacks followed – in the Weald of west Kent, Sussex and on into Hampshire, Wiltshire and Gloucestershire, as well as north into Buckinghamshire, and some Midland counties such as Huntingdonshire, and East Anglia. Moreover, as well as direct action, the threat of such attacks was seen as a powerful weapon and letters signed ‘Swing’ were sent out by the insurgents.

This wave of lawbreaking did bring a much more repressive response from the authorities, and in Kent troops were sent into the Weald and far harsher sentences were handed out at the Special Sessions at Canterbury (25 November) and the December Maidstone Assizes, including transportation and hanging. Among those hanged were two brothers, William and Henry Packman, on Christmas Eve at the traditional execution place of Penenden Heath, a spectacle that drew an extremely large crowd.

Due to such measures, it has been said that the Swing Riots had effectively come to an end by the following year, with only a few local incidents. Yet Carl is less sure the evidence is that clear-cut. Instead he thinks it is important to look more carefully, seeing the response to repression as more complex as rural communities found other ways to protest, as well as turning on those seen as having helped the authorities. Among the latter was a labourer called Bartholomew, who was both verbally abused and attacked at a pub in Bridge because he seemingly was implicated in another man having been sentenced to seven years transportation for breaking a threshing machine in the locality.

Thus 1831 brought more if somewhat different incidents, such as the march of between 14 and 18 paupers to Canterbury on New Year’s Day to complain to the Canterbury magistrates that the assistant overseer was paying out too little. Interestingly, their complaint was upheld. In Tunbridge Wells two months later, on 1 March, the furze on the common was set alight, while in May the woods were twice set on fire at Boughton, Blean. At Dover, too, there was an interesting incident when at the incendiary fire at Priory Farm, even though ‘300’ were said to have gone to help to put out the fires, the pipes of the fire engines were cut rendering them useless. Threats also continued to be a well-used weapon that year, and even where the labourers had not themselves lit the fires, they were prepared to refuse to do anything to put them out.

Such a state of affairs was also present in 1832, anger and resentment continuing to characterise relations between workers and farmers. Furthermore, republican ideas from France were similarly part of the mix, as were attempts to organise ‘political unions’ among the agricultural labourers through meetings in the villages around Canterbury and Rochester, including, as you might expect, at Elham and Barham. Indeed, especially after the introduction of the New Poor Law in 1834 (Kent being the first county), such attempts at forming trade unions increased, albeit they met fierce opposition from the authorities and ultimately failed. Yet, in conclusion, Carl does not see this as a simple picture of Swing’s ‘failure’, rather that radical ideas had become part of the everyday, that the language of ‘war’ was used, and that resentment and bitterness might not be expressed as overtly as in 1830 and 1831, but that resistance was still a viable weapon in the countryside.

His lecture was enthusiastically applauded, and there were several questions and comments from members of the audience. Consequently, even after John Nightingale drew the event to a close by giving a vote of thanks, more people came down to talk to Carl and to offer other examples from their local knowledge of east Kent.

My second event this week is Professor Ellen Swift’s (University of Kent) lecture on her recently completed AHRC-funded project on recreating the sounds of Roman Egypt using experimental archaeology. Her team drew on the small musical instruments in the Petrie Museum in London because Ellen wanted to explore music through objects instead of the more usual method of looking at illustrations and texts. She was keen to see if they could answer questions such as what did these instruments sound like? Who may have listened to them; where and how may they have been played? To gain a better idea of the instruments, the team used a system of 3D scanning and then the making of replicas. This was a great start, but to really understand them as musical instruments the project team wanted to use authentic materials, which involved different methods of craft reconstruction. For the brass instruments, depending on their form, they were either cast or forged, the former using the lost wax modelling technique, the latter the metal hammered using the team’s measurements. These instruments were made by Justin Richardson, a brilliant Canterbury goldsmith.

The wooden, ceramic and reed instruments posed other challenges, but again using 3D lasers and a wood router it is possible to very accurately cut out an instrument, albeit some woods are more prone to catch fire. The ceramic rattles required some alterations in that clay shrinks when fired, which meant the model had to be proportionally bigger when first made, but there was still the problem of having to guessimate the thickness of the original instrument. Equally, it was fortunate that during the research period one of the pellets in the original rattle fell out, a team member quickly taking a photo of it. The pan pipes should have been made of reed, but this proved difficult and bamboo was used instead. Thus, not all the materials were authentic, but the team got as close as they could!

Having constructed a collection of 20 objects, the next stage was to test them. This involved finding illustrations showing them in use, such as a 3rd– century mosaic where female musicians are seen playing finger cymbals, and locating the very few representations of music, including textual fragments and the words and music of a song on a tomb stone. The team also wanted to test the music in terms of soundscapes, and at Medway as part of the university Ellen was able to employ the sound studio. As a result, during her presentation Ellen was able to play sound recordings to her audience.

Yet possibly even more exciting for audience members was the chance to handle and play some of the replicas, and the rattle, cymbals and pan pipes were all a big hit. Indeed, so much so that people became engrossed in the instruments rather than asking questions. Nevertheless, all agreed that it had been an exciting and fascinating presentation and Ellen was warmly thanked by all, including several CCCU archaeology students.