Exploring Kent’s history – and having fun!.

Exploring Kent’s history – and having fun!. 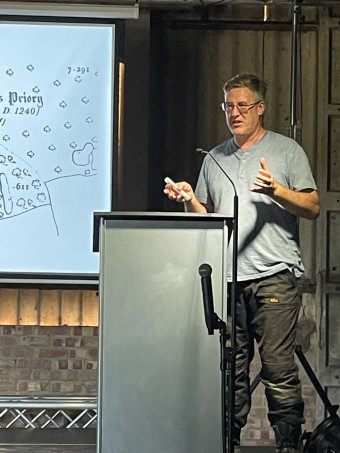 Even though there have been exceedingly momentous events taking place this week, perhaps of even greater concern for historians, especially medievalists having witnessed the televised proclamation of an English monarch for the first time, and thus rituals that go back centuries, I thought I would still bring you a few events concerning the Centre before they become ‘old news’. Hence, I’m intending this will be short!

Firstly, just to say that the reason this is coming out at the weekend rather than last Wednesday or Thursday, is that I spent over half the week at The Fifteenth Century conference at Pembroke College, Cambridge and since I got back marking and some admin have taken up all my time. However, it was a great conference with some excellent papers and I had the chance to talk about aliens in 15th-century Kent, thereby trying out some new ideas and getting some helpful feedback. We were also treated to a special exhibition of material from the college’s archive, which as well as some treasured documents from its foundation and concerning its at one time very considerable estates, included part of the original Paston correspondence!

So a great few days at Cambridge, but what I am going to feature today are Dr Diane Heath’s red carpet event for the ‘Becket Play’ at Sandwich at the end of August and the Lossenham Priory Study Day last Saturday on 3 September. On Friday 26 August most of the children and their families who had been involved in the week-long afternoon workshops at St Clement’s church and other locations across the town gather at this ancient parish church for the premier screening of their ‘Becket play’ which had been devised primarily by Penny Bernard. Being an offshoot of the ‘Medieval Animals Heritage’ project where these workshops and final performance have been funded by KCC, the excited children and adults first of all made light of the excellent refreshments, before settling down on the chairs provided for the main events of the early evening. Having thanked all the organisers, helpers and most definitely the children themselves, Diane distributed certificates to the children who had taken part in various ways within the play, and then had certificates for all the organisers and helpers.

Dr Claire Bartram and I had gone along to see the fruits of all their labours and the audience was treated to a lovely documentary that illustrated the making of the play, starting with the children in teams hunting for animals all around the church building – on the carved stone font, above the doorway at the tower base, the lectern and many, many more. During the week the children made animal-design clay tiles, mimicking those found as part of St Clement’s medieval floor tiles, design and created their own animal costumes, visited Sandwich Guildhall, practiced the play and took part in even more activities. All of these were a prelude to the performance on the final afternoon, the play covering Becket’s return from exile and his murder at Canterbury Cathedral and the responses of the townspeople afterwards. All the parts were played as animals and birds – choughs, wolves, sheep – thereby bringing a special dimension to this play. You could tell how much the children and their families enjoyed it from the excited voices afterwards, and the evening was a lovely finale to what had obviously been a great occasion. Indeed, plans are afoot to do something similar at Dover at the Maison Dieu in the future with the use as well of other venues, just as at Sandwich.

There will be more on such plans as well as other information about different ‘Medieval Animals Heritage’ events, but for now I’ll turn to the Study Day at Lossenham. Having been down on the Friday to help set things up, it was excellent to see on Saturday morning that everything in the barn was still in place. Again, I shall keep this brief but just to say around three sides of the barn we had arranged 16 pop-up banners illustrating different aspects of the Lossenham project ( https://lossenham.org.uk/ ), with the greatest number produced by members of the wills group. Other banners showed the range of animal bones that have been recovered so far in the excavations, and the artistic elements of the project were showcased in two banners, including the experimental kiln that it is hoped will be fired up very shortly when it is full of pots made from clay found on site. In addition to a table with the animal bone specimens, there was one with examples of the medieval tiles found so far, including some decorated ones.

Our invited audience from local history societies and heritage organisations enjoyed refreshments as they started to look round the banners before the first of four talks. The two in the morning explored Sandhurst wills pre- and post-Reformation and farming at Ebony (and the wider Rother Levels) in the early 14th century or the time of the Great Famine. Like the banners (looked after by their creators), these provoked lively discussions and during the lunch break lots of people (audience and project members) went round to visit the archaeologists in the neighbouring field where they are excavating the friary church. This part of the excavation is almost done and even though much was removed, presumably large quantities soon after the Dissolution, the dig has been very worthwhile.

We learnt more about this Carmelite friary in the afternoon, firstly about the history of the order and their place in the wider world before narrowing down to Lossenham itself. This was complemented by the last talk where we gained insights into how the archaeologists had planned their work and evidence of what they have found so far. As in the morning, people were actively engaged in everything, and this outreach event was a considerable success from the comments on the day and in subsequent emails. Indeed, further links have been forged already and the spread of knowledge will benefit all concerned. This was also endorsed at the wills group meeting a couple of days ago, and like all such events, we have some more ideas about what we might do next time, probably in a couple of years as things progress.

Turning to more immediate events that are coming up, The Centre is involved in four events in September as a bare minimum: The Kent Pilgrims’ Festival, specifically the symposium on Wednesday 21 September at CCCU which is free, please see the website for this and other events: https://drive.google.com/file/d/1cNfiqyACIxk86oQTXOwtt0AMfPiWs4M_/view including walks. Then on Friday 23 September Diane has her ‘Dragon of Greyfriars’ launch at the Franciscan Gardens in Canterbury in the presence of the city’s Lord Mayor: https://www.medievalanimals.org/ . Saturday 24 September is the joint ‘Resistance and Reform in Kent: from the Conquest to the Present’ conference (9.55am to 4.15pm) with KAS which is free. It will be held at CCCU and the Touchdown café will be open for the purchase of light refreshments 11am to 3.30pm ie covering both breaks and lunch time. Tickets are available at: https://www.canterbury.ac.uk/arts-and-culture/event-details.aspx?instance=396806 or if you have problems, send an email to: sheila.sweetinburgh@canterbury.ac.uk

To round off the Centre’s events this month, we have the joint Michael Nightingale Memorial Lecture on Tuesday 27 September with the Agricultural Museum Brook. This year Dr Graham Bradley will explore the fascinating history of this village at the foot of the Downs. The lecture starts at 7pm and is free, details at: https://www.agriculturalmuseumbrook.org.uk/  so please do just come along. The Lord Mayor and her Consort will be attending, we are keeping them busy, and as usual she will be giving out Ian Coulson Memorial Postgraduate Awards. I hope to see some of you soon as we also move towards the beginning of the university term.