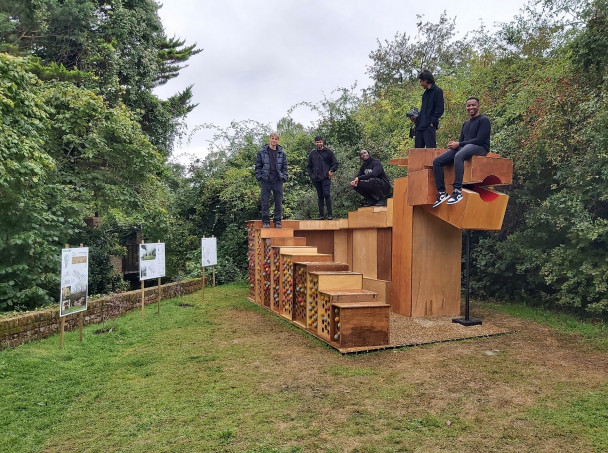 Following the funeral of Queen Elizabeth II, the blog is now back and there have been several events involving the Centre for Kent History and Heritage.

Moreover, we are in the midst of Freshers’ Week. This means Dr Diane Heath with Dr Pip Gregory have been at the Freshers’ Fayre recruiting students as volunteers for the second year of the NHLF-funded ‘Medieval Animals Heritage’ project. Among the projects coming up that volunteers can get involved in is the building of a second ‘Green Dragon’ as part of the Climate Crisis and Sustainability initiative at the university. In addition, further down this blog I’ll be reporting on the opening of the ‘Greyfriars Dragon’ but before then, I thought I would mention a couple of other events.

As regular readers of the blog will know, one of the members of the Kent History Postgraduates is Peter Joyce. His doctoral work focuses on the Medway region in terms of the development of provision for the poor in the 18th and early 19th centuries. This project has come out of his MA research on the life and writings of the Revd Caleb Parfect. Beyond his doctoral work, Peter has recently been appointed as Kent Archaeological Society’s Outreach and Events Officer and because it was the KAS AGM last Saturday, he was there to give those present a short talk on how he sees his role and how he intends to enhance the Society’s communications to its members and to the wider public. This is an exciting development and hopefully will bring together KAS and other institutions and organisations across Kent to provide conferences, lectures, exhibitions and workshops as different ways to bring the county’s history and heritage to many different audiences.

Talking of bringing groups together, this week the Kent Pilgrims Festival has a whole series of events such as walks, talks and workshops, as well as a day symposium on ‘Pilgrimage as transformation’ at CCCU. The symposium was opened by the university’s Vice-Chancellor and among the presentations in the morning were ones on Canterbury’s UNESCO World Heritage Site and the way forward by Neil McCollum; Professor Carolyn Oulton and Dr Jane Lovell on ‘Literary Pilgrimage’ and I’m sure you will not be surprised to know Dickens was very much to the fore, while Dr Ralph Norman talked on ‘Reverse Pilgrimage’, seeing Canterbury’s Victorian missionary college at St Augustine’s as taking ‘pilgrims’ across the Empire as part of the development of world-wide Anglicanism.

The afternoon took us in other directions, including Leonardo Porcelloni, a historical geography postgraduate from the University of Nottingham who is researching pilgrims’ and hosts’ experiences in Italy along the Via Francigena, and two presentations of different aspects of labyrinths by Canon Emma Pennington and Christopher Daniel. Not that this gave those present time to experience the university’s own labyrinth up at St Martin’s Priory, but it did get a mention.

The final presentation took us back to pilgrimage as an important phenomenon in medieval times, and because these were short presentations, I concentrated on pilgrimage to St Thomas’ shrine in Canterbury during the late Middle Ages. As well as touching on civic pilgrimage with reference to Dover’s great candle, another point was the idea that pilgrimage to Canterbury for some was a one-way journey. Now, of course, we have no idea how many poor pilgrims died on the way or when they reached Canterbury, but it is hardly an accident that at both the Maison Dieu in Dover and at St Thomas’ hospital in Canterbury, there were valued provisions for the burial of these same pilgrims who died at the two hospitals. Indeed, as the painting of the Day of Judgment at St Thomas’ church in Salisbury still shows (and such paintings on the chancel arch would have been extremely common in medieval times), care for the soul was likely to be uppermost in the minds of those who journeyed to ‘the blessed martyr’ at Canterbury. Thus at Dover there was the cemetery chapel dedicated to St Edmund of Abingdon that contained the bowels of St Richard of Chichester as a relic, the bishop having died at the hospital during a preaching tour, while at Canterbury those dying at St Thomas’ hospital would be buried in the cathedral’s lay cemetery, not far from the shrine with the likelihood that their mortuary candle would come from the great Dover candle that had been sitting near to St Thomas.

As well as activities taking place in Canterbury and in places around the city, a considerable number are taking place at Dover as part of this Festival. The Maison Dieu and St Mary’s church feature heavily in the programme, including a medieval tile workshop at the Maison Dieu on Friday evening which Diane is attending, but St Edmund’s chapel will also feature. Kieron Hoyle, another of the Kent History Postgraduates, will be there this weekend as a volunteer to assist with the workshops. As blog readers may remember, Kieron is just about to embark on a PhD on the history of the Maison Dieu from its last years as a pilgrim hospital to its transformation into a vital aspect of the town’s defensive harbour works under the Tudor monarchs.

So now to the Greyfriars Dragon which made its first public appearance this week. The winning team of University of Kent School of Architecture students have been working very hard over the last few weeks to ensure the dragon was ready to greet the Lord Mayor and the Mayor’s Consort, members of the community from Eastbridge, including the Master, trustees, and staff, members of staff and students from Kent and Christ Church universities, the headmaster and students from the Royal Harbour Academy, Ramsgate and other guests. Consequently, even though it was raining, it did not dampen the enthusiasm with which the dragon was greeted and it is indeed a spectacular beast that will give immense pleasure to SEND children and their families hopefully for a considerable time to come, is a considerable Green Heritage and sustainability installation in its own right, is a great eco-space and will be a great asset to the Franciscan Gardens. In her speech, Diane also thanked the architecture students: Colin, Jamaal, Ahmed, Tariq and Reuben, staff members from the School of Architecture: Gerry Adler, Rebecca Hobbs, and Dr Ambrose Gillick and the technicians including Kevin Smith. Additionally, Diane thanked the Franciscan Gardens for all their help, Historic England for agreeing to this space being used to ‘plant’ the dragon, and the National Heritage Lottery Fund for backing Diane’s ‘Medieval Animals Heritage’ project of which this is a spectacular example of what can be achieved in partnership for the benefit of those groups within society who are disadvantaged. Hopefully, many, many children (and just a few adults!) will enjoy ‘feeding’ the dragon tennis balls, as well as exploring, playing and learning in its company.

Finally, I just want to flag up two events that will feature in the blog next week. Firstly, on Saturday 24 September we will be holding the ‘Resistance and Revolt in Kent’ conference at Christ Church in conjunction with Kent Archaeological Society. The subjects discussed by our eight speakers will range across the centuries, from the First Barons’ War during the reign of King John to the ‘Battle of the Ducks’ in the 20th century.

Then next Tuesday (26 September) we will again be in partnership but this time with the Agricultural Museum Brook, as well as seeing this linked to NHLF ‘Medieval Animals Heritage’ to act as a student volunteer recruiting event, as we first celebrate the Ian Coulson Memorial Postgraduate Award holders for the new academic year and then enjoy an illustrated lecture on the history of Brook by Dr Graham Bradley, the annual Michael Nightingale Memorial Lecture. There is a wine reception in Old Sessions House, CCCU from 6.30pm with the event beginning at 7pm in the Michael Berry Lecture Theatre, Old Sessions. The lecture is free, booking not required and there will be a retiring collection at the end. ALL WELCOME

Moreover, next week marks the first week of teaching at both Kent and Christ Church, an already busy time for members of the Centre, but nevertheless a time of opportunity to bring history and heritage into focus for those both inside and outside the walls of academia – just watch this space!