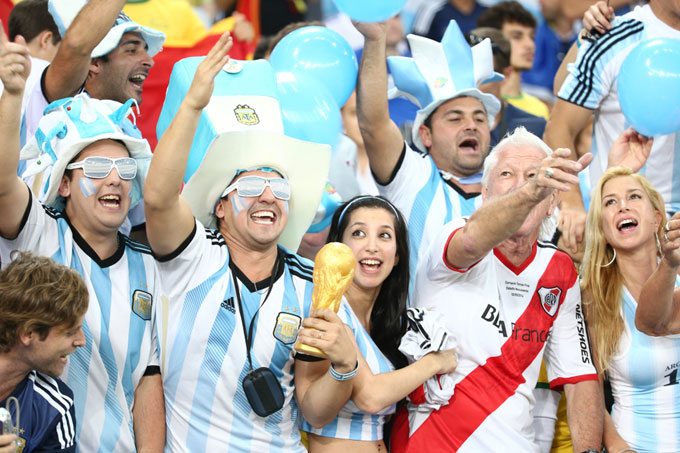 Fast forward to 9pm on 15th July.  After 90 minutes, extra time, and nine penalties, England and Germany are level in the World Cup final, and England’s fifth penalty taker steps up.  Score, and England win the World Cup for the first time in more than half a century. Miss, and Germany are back in the driving seat in a penalty shoot-out… again! This is a live moment, with the country on the edge of its collective seat, and the outcome genuinely uncertain.

A pipedream perhaps, but roll with it for a while… where would you want to be for this live moment, for this moment that is only meaningful if it is experienced live? For World Cup 2018 you will have more options than ever to “be there” for that moment… but where is there?

On 30th July 1930, 93,000 people were there in the Estadio Centenario for the live moment when the Uruguayan hosts beat Argentina in the Inaugural World Cup final.  Eighty-eight years ago, the live moment was only available to those who had stadium tickets, the rest of the word were dependent on newspapers, newsreels, and other media that took months rather than minutes to report the result.

In England in 1966, sales of televisions went through the roof as millions of ticketless fans found a new way to share the live moment. As the people who thought it was all over spilled onto the pitch, fans around the country shared with their families the moment when Geoff Hurst scored to win the World Cup for England. But is sharing the live moment with your Granny on the sofa the same as sharing it with 93,000 people in the stadium? Not really! And so for Baddiel and Skinner’s thirty years of hurt that followed, football fans watched live matches on TV wishing they had a ticket to be there.

But then came big screens, and the sale of television rights to pubs, which became venues in their own right. For the first time the live moment became a genuinely communal experience for those who didn’t have tickets. Being there started to mean more than being in the stadium, and “there” became anywhere where groups of fans could gather to share the moment. For England’s second match of the 2002 World Cup in Korea and Japan, which took place at 7:30am UK time, fans spent £80million on 35million pints of beer in pubs and bars across the country before breakfast, all in pursuit of the shared experience of that live moment.

Four years later in 2006, Germany became the first World Cup host to actively invite ticketless fans to travel to the host country, setting up “fan fests” with super size screens in city centres that each catered for up to 8,000 fans. “Being there” took on yet another meaning as opportunities expanded for fans to share the live moment, and fan fests have now become a permanent World Cup fixture.

So how will the live moment be shared in 2018? Will fans still want to gather en masse around big screens to experience and share the moment? Or will we be a nation of individuals experiencing the moment on the smallest of smartphone screens, and sharing the moment with distant friends and followers on Instagram, Snapchat, Facebook and Twitter. It is certainly likely that the largest indicator of the reach of World Cup 2018 will not be the worldwide TV audience, but the global Twitter surge after the first goal in the final. This tells us that the desire to experience the live moment, and to respond instantly to it, hasn’t changed. But rather than reaching for the person next to us for a celebratory hug to the sounds of reverberating cheers, will we really be celebrating by reaching for our keyboards to the sound of Twitter alerts?  It’ll be live, but not as we know it!

Professor Weed is Pro Vice-Chancellor (Research and Enterprise) and Strategic Director of the University’s Centre for Sport, Physical Education and Activity Research (SPEAR). He is also editor-in chief of the Journal of Sport and Tourism.