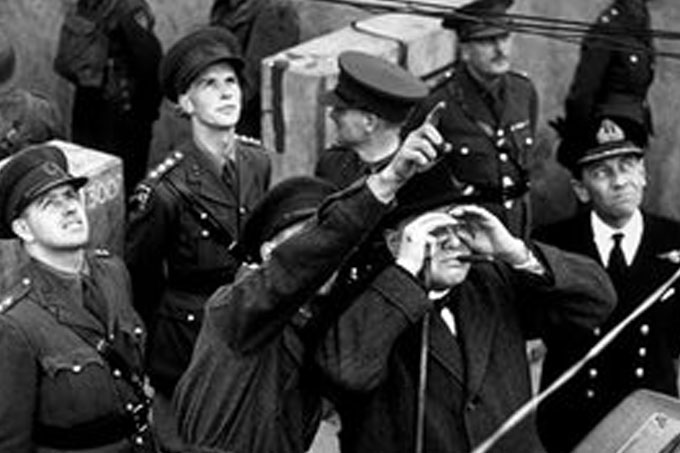 Kevin Ruane, Professor of Modern History, explores Churchill’s fascination for science and its power for good or bad.

The media at home and abroad has been abuzz the last day or so with the arresting news that Winston Churchill, Britain’s most famous statesman, was convinced of the existence of alien life somewhere out in deep space. ‘“We shall fight on the landing grounds”: Sir Winston Churchill believed in aliens, essay reveals’ ran the slightly tongue-in-cheek headline in The Daily Telegraph. The essay in question has been unearthed at the National Churchill Museum in Fulton, Missouri.

The truth, though, has been out there for some time. Churchill was not a frivolous star-gazer, an X-Files-type addict on alert for extra-terrestrial invaders. He was a life-long and serious-minded believer in the transformative power of science, a consistent champion of technological innovation, and a friend and admirer of scientists as the deliverers of progress. The surfacing of this essay has simply helped make all this known to a wider audience.

As a young man, Churchill devoured science fiction. H. G. Wells was an especial favourite; he read all of Wells’ output with such avidity that he once boasted ‘I could take an examination in them’, while The Time Machine, published in 1895, was the book he said he would ‘take with me to Purgatory’. Prior to the First World War, as First Lord of the Admiralty, Churchill’s keen scientific-technical imagination led him to advance the idea of battleships fitted with air-strips – what today we call aircraft-carriers – and later he was amongst the foremost supporters of research and development of ‘land battleships’, better known as tanks.

In the inter-war years, Churchill became fascinated by nuclear science. It was Wells who first predicted atomic bombs and nuclear warfare in his 1914 story, The World Set Free, which Churchill greatly admired. In the 1930s, the future which Wells had mapped out came closer to realization with the “splitting of the atom” by John Cockcroft and Ernest Walton, the confirmation of the existence of the neutron by James Chadwick, and finally, in 1938-1939, the discovery of nuclear “fission” by two German scientists, Otto Hahn and Fritz Strassmann.

For Churchill, the 1930s were his so-called wilderness years when he was out of office, out of favour and often out of sorts. After taking a financial hit at the time of the Wall Street Crash, he needed to earn money and writing for mass circulation magazines and newspapers like The News of the World brought him a steady income. One of the recurring themes of his journalism was the wonders of modern science. But he also warned of “dark science”, specifically, the danger that the destructive power of nature might yet be harnessed to the military machines of totalitarian states.

Today, reading Churchill’s ‘pop science’ pieces, he seems to have been incredibly well-informed. The unearthed essay (really a 1939 draft of an article later published in 1942) is really quite sophisticated in its treatment of astrobiology. And for a good reason. Churchill the science writer was not a solo-act. He worked closely with Frederick Lindemann, Professor of Experimental Philosophy (Physics) at Oxford University.

The two men met in 1921 and instantly bonded, indeed Churchill’s friendship with Lindemann (known to all as the Prof) was amongst the most important of his long life. Lindemann kept Churchill abreast of scientific developments, and Churchill, in turn, took the Prof’s scientific input and shaped it into articles for mass consumption – all of them written in unmistakable Churchillian prose. The newly discovered piece on extra-terrestrial life bears the hallmark of this Lindemann-Churchill double-act.

So let’s not get carried away with media depictions of Churchill as a nerdy lover of Wellsian science fiction given to flights of fantastical inter-galactic prognostication about little green men. To the contrary, Churchill may well have been the most scientifically-literate Prime Minister this country has had – and that includes the Oxford-trained chemist Margaret Thatcher. Churchill College, Cambridge, opened in 1958 with its focus on science, technology and engineering, is a fitting tribute to his commitment and enthusiasm.

Moreover, aided by the Prof, Churchill turns out to have been a scientific visionary. In ‘Shall We All Commit Suicide?’, published in 1924 in Nash’s Pall Mall, he wondered whether the time was approaching when ‘a bomb no bigger than an orange’ might be ‘found to possess a secret power to destroy…a township at a stroke?’ Just over two decades later, as Britain’s wartime leader, he answered his own question by approving US plans to employ the newly-developed atomic bomb against Hiroshima and Nagasaki.

Kevin Ruane’s latest book, Churchill and the Bomb in War and Cold War, is published by Bloomsbury.