80 years of Superman: man of tomorrow, a chronicle of all our todays

“Fate left me off at the UN building – I wonder why?” Wonder Woman & the UN

Dr Michael Goodrum, Senior Lecturer in the School of Humanities, discusses the decision by the UN to name comic book heroine Wonder Woman as an honorary ambassador.

Wonder Woman has been chosen by the UN as an honorary ambassador to highlight issues of female empowerment and gender-based violence. Given her history, and the fact that she is a fictional character, this seems like an odd choice.

Since Wonder Woman’s creation in 1941 by William Moulton Marston and Harry G. Peter, over 20 different people have written her eponymous series. The overwhelming majority of these are male; only Gail Simone and Meredith Finch are credited in the list of writers. This is not to say that more women have not been present, just that their contributions have been obscured. Elizabeth Holloway Marston, William’s wife, played a role in the creation of the character that is not generally acknowledged. Joye Murchison composed many early scripts for the title while working as William Moulton Marston’s assistant and she, too, goes uncredited. She does not even have a Wikipedia entry. 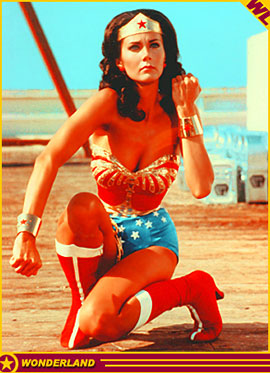 The television series of the 1970s starring Lynda Carter was executive produced and produced by men; no episodes were directed by women, and women had a sole or joint writing credit on only 22 of the 59 episodes made.

Created by men, largely written by men, and mostly aimed at men, even Wonder Woman’s recent ‘coming out’ (although long hinted at) was narrated by a straight white male. This is the character the UN have chosen to be a symbol of female empowerment.

It is also odd that Wonder Woman, who frequently upholds the concept of phallocentric violence key to the superhero genre, has been chosen to highlight issues around gender-based violence. She even acts as God of War at one point (beginning in Wonder Woman #23 [2013]), locating her firmly within patterns of conflict that seem at odds with working to reduce physical threats to women.

A number of superheroines get caught in this trap of elevating rather than questioning violence; this can partly be attributed to the spectacle of women fighting and the opportunities it offers for their sexualisation. Even as women take an active part in narratives, they are framed for the male gaze. Mike Deodato, who drew the character from 1992 to 1995, makes this abundantly clear, stating, “every time the bikini got smaller, the sales got bigger”.

Although promoted as a feminist icon throughout her history, most famously adorning the cover of Gloria Steinem’s Ms. magazine in 1972, there are multiple strands at work in Wonder Woman’s narratives that make this definition problematic. Ms. embraced Wonder Woman’s homeland, Paradise Island, as an originary matriarchy, a feminist utopia that could be held up as an example thanks to its policies of reform and loving care rather than punishment.

Acting as an example was precisely what Marston had in mind when he co-created Wonder Woman, seeing her as a means of persuading men to submit to the ‘loving authority’ of women. Proposing the e-evaluation of ‘traditional’ feminine characteristics that instead of relegating them to a support function in the home, sought to elevate them to leadership in order to tame the interpretation of men as governed by ‘war-like’ impulses.

The early years of the comic-book are also characterized by a keen interest in bondage, a particular fascination of Marston’s, who lived in a polyamorous relationship with two women until the end of his life. Bondage and costumes have long worked towards the representation of Wonder Woman as titillation for adolescent male audiences rather than a positive force for gender equality. The frequent representations of women in bondage in those early years perpetuate gender hierarchies and the sexual objectification of women rather than mounting an assault on male privilege.

In Wonder Woman #7 (1943), Wonder Woman uses magic to look forward to the year 3000 so that she can see the first woman elected as President of the USA. After putting down a revolt by the Man Party, then revealing electoral fraud by them in their victory in the 3004 election, Wonder Woman is herself elected to the presidency. There is a very real chance that reality will outdo fiction by nearly a millennium in the American Presidential election this November. And of course many other countries around the world have had, and currently have, female leaders.

Wonder Woman is a symbol, and that should be embraced, but she remains problematic and, more importantly, fictional. And not just fictional – Wonder Woman is not even human, but a figure from Greek mythology. There are women, real women, capable of demonstrating leadership and filling this role, rather than a fictional character who can never speak for herself and, no matter how powerful in her world, suggests to women in ours that positions of female leadership are doubly beyond their reach, as only capable of being filled by fictional, non-human characters.

Michael Goodrum, Senior Lecturer in Modern History, has recently published Superheroes and American Self Image: From War to Watergate (Ashgate, 2016), and is co-editor of the forthcoming Gender and the Superhero Narrative (University Press of Mississippi, 2017).