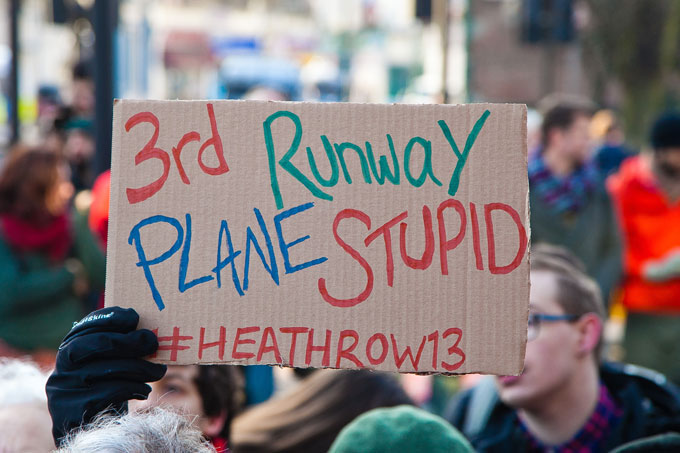 Dr Stephen Scoffham asks if the recent Court of Appeal ruling on the third Heathrow runway is a tipping point in more ways than one for environmental issues.

It is a little more than 100 years since aeroplanes first took to the skies.  Now there are over four billion scheduled passenger flights worldwide each year and air traffic accounts for around a third of international trade in terms of value.

In the UK alone just one airport, Heathrow, handles well over 65 million passengers a year, making it the third busiest in the world. Is it now time to build a third runway?

The argument hinges around the economic need for the UK to maintain its place in the world economy. Without a hub airport it is feared that Britain will be left behind as other countries continue to grow. Set against this, the environmental damage which the new runway will create is a source of serious concern. It is anticipated that there will be around a quarter of million extra flights a year which will generate significant greenhouse gas emissions.

Perhaps this is a good moment to step back from the details of the pros and cons and look instead at the big picture. At a global level, we know from the work of the Stockholm Resilience Centre that we have already breached a number of crucial environmental limits and that humanity collectively is living beyond its means, particularly in the industrialised West. Should we now be re-interpreting what we mean by prosperity to focus on well-being and planetary living rather than ever increasing material wealth?

In their ground-breaking book, The Spirit Level, Wilkinson and Pickett argue that we have come to the end of what higher material standards can bring and that reducing inequality is now the best way of improving our quality of life. Interestingly, this idea has come to the fore in the debate about expanding Heathrow. An alternative approach would be to develop regional airports which would help to reduce the disparity between the North and South of the UK and contribute to the current government’s ‘levelling up’ agenda.

The landmark ruling at the end of February by Court of Appeal on the third Heathrow runway could be a tipping point in more ways than one. The judges ruled that the government hadn’t taken account of its commitment to stabilise greenhouse gas emissions in the Paris climate agreement which made the plans illegal. This decision may well set a precedent which will inspire similar challenges to polluting developments around world. Rather than making the economy work ever faster at the expense of the environment, the debate about Heathrow suggests a fundamental shift of emphasis. From now on, we need to strive to make the economy work better for everyone. Ultimately this means a more rounded appraisal of human needs which takes account of the natural environment on which we all depend.

Dr Stephen Scoffham is a Visiting Reader in Sustainability and Education.