Putin’s vision for Russia: A tale of two statues.

Putin’s vision for Russia: A tale of two statues. 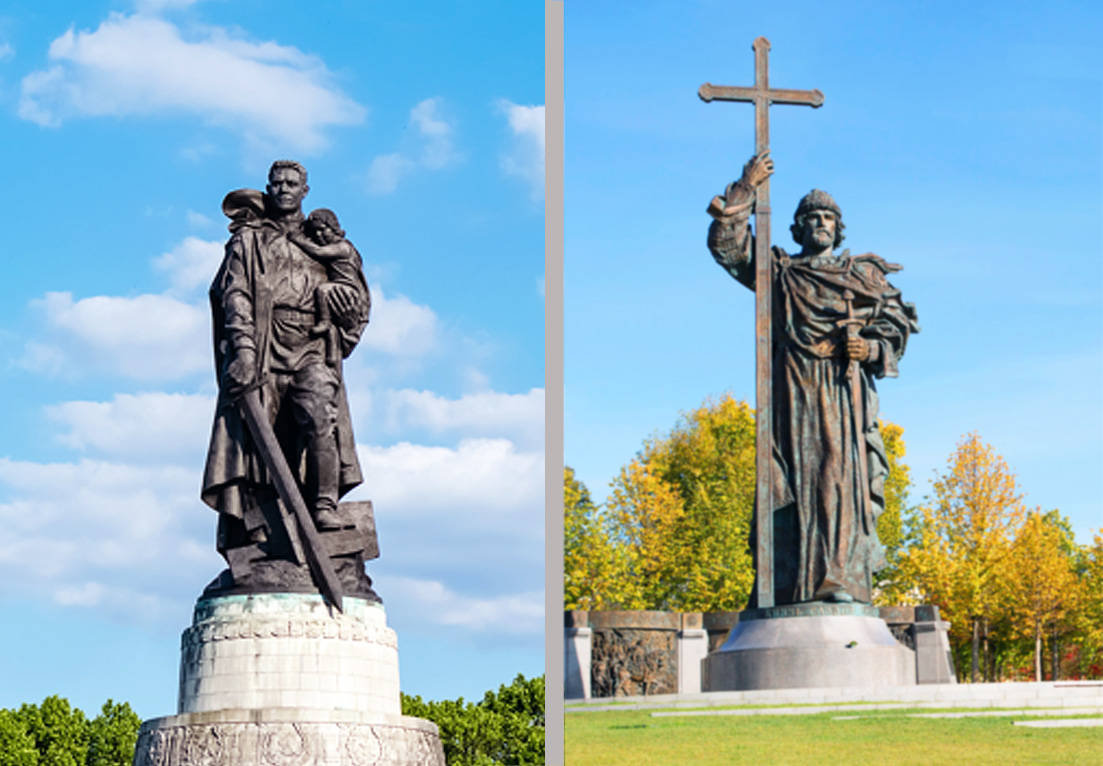 Standing between the immaculate tree-lined avenues of Treptower Park in Berlin is a colossal bronze statue of a Soviet soldier. He carries a young child with his left arm and in his right hand he grasps the sword he has used to shatter a swastika that lies broken under his feet. The 12-metre-high statue forms the centrepiece of the largest Soviet war memorial in Europe; a site that commemorates 80,000 soldiers of the Red Army who fell in the Battle of Berlin. Inscribed in various places around the site are Stalin’s words: “Now all recognize that the Soviet people with their selfless fight saved the civilization of Europe from fascist thugs. This was a great achievement of the Soviet people for the history of mankind”. From this perspective, the statue appears to symbolise the USSR (the soldier) rescuing Europe (the child) from Nazism (the swastika) and to serve as a poignant reminder of the huge sacrifice made by the Soviet Union during World War II.

This particular memorial opened within the Soviet sector of Berlin on 8th May 1949, four years after the surrender of Nazi Germany. The eradication of Nazism – and by extension Fascism – formed the central narrative of war memorials erected in East Germany and was echoed by many thousands of others across the USSR and its satellite states. The loss of those states and the subsequent collapse of the Soviet Union, sealed by its dissolution in 1991, was called “the greatest geopolitical catastrophe of the twentieth century” by Putin in 2005. More recently, his stated objective on 24th February 2022 “to denazify Ukraine” was intended to resonate with Russians who see his “special military operation” as a continuation of the mission to rid Europe of Fascism.

Over a thousand miles away in Moscow, a mural of the Treptower Park statue overlooks a newer bronze monument: a 17-metre-high statue of Vladimir the Great (c.958–1015), erected beside the Kremlin in 2016. Ruler of Kievan’ Rus, the medieval federation to which he introduced Christianity in 988, Vladimir’s statue makes a symbolic gesture: his right hand holds a processional cross, while his left grasps his sword. As Putin said at its unveiling in 2016: “Today it is our duty to stand together against contemporary challenges and threats, using our spiritual legacy and our invaluable traditions of unity to go forward and continue our thousand-year history”. Whereas Soviet leaders sought to eliminate religion (“the opium of the people”, as Marx famously described it), Putin sees Russia as a defender of Christian values, especially against the advances of secularism and materialism associated with the excesses of Western capitalism.

Statues are statements. As physical expressions of values, they are not without controversy. The relocation in 2007 of a bronze statue of a Soviet soldier from the centre of Tallinn to a military cemetery on the outskirts of the city caused the worst riots in Estonia for decades. Whereas some regard the Red Army as liberators, others see them as occupiers. Even the nationality of Vladimir the Great is contested; as well as Russia, Ukraine also claims him as a founding father, as embodied by a statue erected in 1853 in Kyiv – his place of baptism and conversion to Christianity. Putin’s recent revisionist history lesson, in which he denounced Ukrainian statehood, leans heavily on the idea that his namesake was unequivocally Russian.

If the meaning encompassed by these two statues can go any way in explaining Putin’s motivations, their central message should remind him that sacrifice is the cost, not the price, of freedom. Future monuments to fallen soldiers on both sides of the current war will promote and reinforce narratives of victory. Future generations, however, may not look so favourably on what was chosen to be remembered, or how.

Dr Alex Kent is Reader in Cartography and Geographic Information Science. He lectures in geopolitics on the Geography programme within the School of Psychology and Life Sciences.