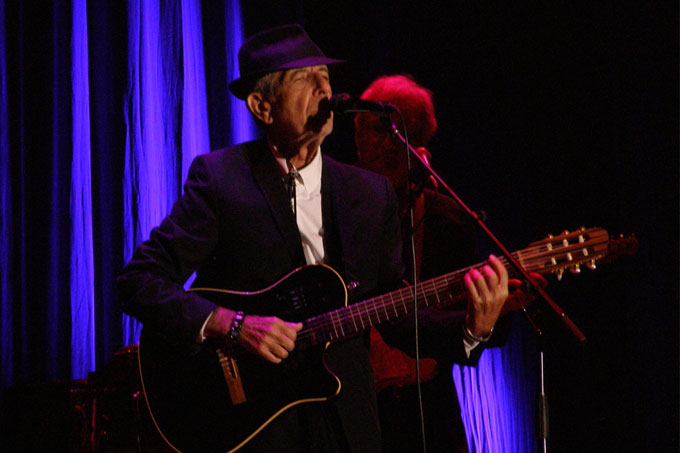 Dr Maria Diemling, Reader in Jewish-Christian Relations in the School of Humanities, looks at the influence of Leonard Cohen’s Jewish background on his final album.

When Leonard Cohen’s former lover Marianne, immortalised in one of the most enduring love songs ever written, was dying earlier this year, Cohen sent her a message that hinted that his own death: ‘Well Marianne, it’s come to this time when we are really so old and our bodies are falling apart and I think I will follow you very soon. Know that I am so close behind you that if you stretch out your hand, I think you can reach mine.’

The Canadian poet-singer-songwriter’s last album was released only three weeks before his death. Many critics understood it as his farewell to his fans. The first song, the eponymous ‘You want it darker,’ seemed to indicate that Cohen was ready to die. However, there is more to this song when we read it as an expression of Cohen’s Jewish background. ‘Hineni Hineni, I’m ready, my Lord’ whispers Cohen in the chorus. But what does this actually mean?

Leonard Cohen grew up in a middle class cultured Jewish home in Montreal, Canada. He received a sound Jewish education, steeped in observance of Jewish rituals and deep familiarity with Jewish liturgy. It is well known that Cohen studied Buddhism for a long time. He was the best known ‘Jew-Bu’, one of many Jews who seek Enlightenment and spiritual guidance in Eastern traditions. While Buddhism is shunned by some observant Jews as idol worship, according to some estimates as many as a third of all non-Asian Buddhists in North America have a Jewish background. In his last album, however, Cohen returned to Judaism.

‘You want it darker’ can be read as a prayer, a conversation and a reckoning with God. The Hebrew word ‘Hineni’, ‘Here I am’, is what the biblical Patriarch Abraham says to God when God calls him in Genesis 22:1, the beginning of the disturbing story in which God tests Abraham and asks him to prepare his precious son Isaac for sacrifice: ‘Here I am’ – Abraham is ready to do whatever God tells him.

Cohen has said that ‘Hineni’ is about the willingness to serve. However, Cohen is not an obedient and uncritical follower of God.  ‘You want it darker’ is also steeped in the Jewish tradition of reckoning with God. ‘You want it darker’ can be read as a challenge to God and God’s followers who – because ‘it’s written in the scriptures/ And it’s not some idle claim’ – believe they have permission ‘to murder and to maim’ because God wants it ‘darker’. A God that often proved powerless, ‘vilified and crucified/ In the human frame’, and a God whose offerings are worthless, ‘If you are the dealer/ I’m out of the game/ If you are the healer/ I’m broken and lame.’ A God that has abandoned those pleading for help, ‘A million candles burning’, but in vain, ‘For the help that never came’.

Cohen has often used female backup singers to contrast his unique timbre but for ‘You want it darker’ he chose the Cantor and the all-male choir of the Montreal synagogue where he had his religious coming to age ceremony, the bar mitzvah, and where his grandfather and great-grandfather had been presidents of the congregation. Cohen explained to the cantor that he was ‘looking for the sound of the synagogue cantor and choir of my youth’. The Cantor evocatively sings ‘Hineni’, a prayer of preparation and humility in the liturgy of the Jewish New Year.  ‘You want it darker’ – a homecoming in more than one way.