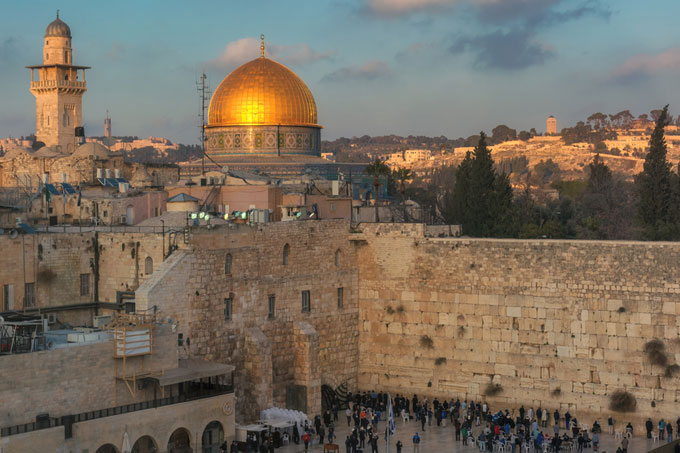 Professor Peter Vujakovic discusses how a sense of place can impact upon world affairs.

A distinctive ‘sense of place’ is a powerful element in the foundation of many national identities. Language, ethnicity and a common history may be important, but specific ‘sacralised landscapes’, provide a much more potent focus.

While most landscapes, for example the White Cliffs of Dover, Monument Valley, or Glen Coe, tend to support a singular and specific identity, some sites are highly contested, so Donald Trump’s decision to recognise the city of Jerusalem as the capital of Israel is momentous.

The city is central to Jewish identity, but is also revered by Muslims and Christians. Some commentators see Trump’s pronouncement as playing as much to his fundamentalist Christian constituency at home as a supportive gesture to Israel. What is most significant is the fact that the most powerful state on earth has rejected internationally accepted norms in this situation. In response, the EU’s foreign policy chief has clearly stated that the EU fully supports Jerusalem becoming the capital of both Israel and a future Palestinian state.

How should academics react to this situation? Jerusalem as a ‘crowd symbol’ for both Jewish and Palestinian ‘homelands’ suffers from the issue of ‘indivisibility’, whereby neither can accept complete ‘ownership’ by the other.

The onus on academics and others involved in educating the public must be to explain the situation in a nuanced manner that represents both the complex socio-politics of ‘place’ and the de facto situation on the ground. This can be extremely difficult and some have had their fingers burned.

My own involvement included a foray into the debate in 2003 as editor of the Cartographic Journal. In early September Al Jazeera, an international news agency, noted that Jerusalem was labelled the ‘national capital’ of Israel in an atlas produced by a leading UK publisher. This was despite the fact that it is not recognized as such by the United Nations, and most governments locate their diplomatic missions in Tel Aviv. Al Jazeera reported that the UK’s ‘Islamic Human Rights Commission’ had demanded an apology from the publisher on the basis that labelling Jerusalem as the capital ‘legitimized . . . the Israeli occupation of Palestine’. The demand for an apology was supported by a range of other pro-Palestinian organizations, including the ‘Muslim Public Affairs Committee’ (MPAC).

The publisher’s defence was that they were ‘aware of the sensitivities’ and adopted the same approach as ‘the majority of cartographic companies and publishers around the world . . . to show the capital nominated by the nation state and the de facto situation.’ The publisher pointed out that they treated Israel no differently to any other state and that Jerusalem has been shown as the capital in their atlases since the mid-1950s (Jerusalem had been ‘proclaimed’ the capital by the Israeli Knesset in 1950). They also pointed out, where scale permitted, they gave equal weighting to the Hebrew (Yerushalayim) and the Arabic (El Quds) forms of the name. The episode pointed to the problem facing the cartographic community in a volatile political world. I made the case for clear labelling of the both the de facto situation in Israel and international stance, which is the stance that the publisher eventually adopted.

The power of ‘sense of place’ in national identity and state formation should never be under-estimated – in Jerusalem the ‘Wailing Wall’, part of the temple initiated by Herod the Great, is revered by Jews, while the  Al-Aqsa Mosque, is sacred to Muslims – both are potent ‘crowd symbols’. The world needs to see these as examples of shared identities – as part of the Abrahamic faiths – supported by true leadership from the world’s strongest power.

Peter Vujakovic is Professor of Geography in the School of Human and Life Sciences. He has written extensively on maps, geopolitics and ‘sense of place’. He is co-editor, with colleague Dr Alex Kent, of the recently published Routledge Handbook of Mapping and Cartography, and is an expert contributor on ‘The Power of Maps’ to The Times Comprehensive Atlas of the World.