It’s behind you! Or, is it simply here in Canterbury?.

It’s behind you! Or, is it simply here in Canterbury?. 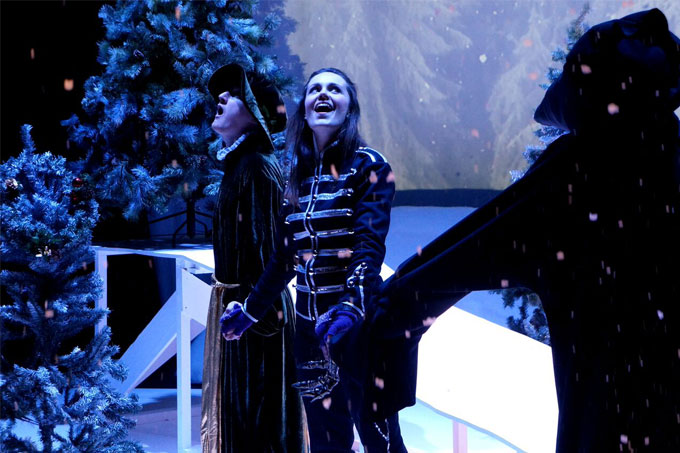 The pantomime season is in full swing with families booking tickets to see a story unfold though song, dance and plenty of Christmas spirit. But what do you expect when you experience a Christmas Panto?

Ethan Maltby, Senior Lecturer in the School of Music and Performing Arts, challenges you to rethink the modern day pantomime and search for the more traditional.

At this time of the year, as is tradition, the country is rife with pantomime filling up your local theatres. Most of these pantos will be interchangeable, a selection of some celebrity performers, a well-known fairy-tale narrative, many jokes you’ve heard before and renditions of the latest chart hits, and if they have the budget, something might fly on wires!

However, I urge you to look a little harder, look for the productions that don’t have the might, money and marketing machine of your number one touring house. Look for the fresh and creative work that is going on, because there will be some near you, I’m sure of it.

I am Director and Producer of my own Christmas themed musical, The Sparkle Thief, which is an original story created by myself and my music theatre writing partner, Jenna Donnelly, at a lovely 86 seat venue in the grounds of Canterbury Christ Church University. We wrote the show as a kind of anti-panto, in the vein of a film such as Elf (now an extortionately overpriced West End musical), the show is just 70 minutes long and fit for the whole family. It doesn’t rely on the usual tropes that corporate panto does, it is entirely its own property and crammed full of Christmas cheer.

You won’t be reading our review in the Stage because though we asked, they won’t come down, but, what we do have is a young, talented cast and a fun hour at the theatre. So, if you are choosing just one show to see this season, why not go for something that might surprise you and create your own tradition?

Every year I see new musicals coming into the West End, right now, the trend is to pick a film, any film, find a few ‘names’ to attach and throw £10 million at it. For example, next year we have not one, but TWO musicals penned by Gary Barlow. Mr Barlow is a well-regarded pop writer, but I would argue that he is not a writer of musical theatre, and this method of creation is getting pretty tiring. Might it be why so many of these shows shut within a few months? I love musical theatre, but hate most musicals. The form can be powerful, energising and exciting, the end result of most however, is far from that.

People don’t want to take risks, I can understand that, however, in the case of The Sparkle Thief, the risk is minimal and if productions like this aren’t supported, well, you only have yourselves to blame when Ronan Keating’s Trainspotting: The Musical hits the West End in 2017.

Ethan Lewis Maltby is a British Composer, Senior Lecturer and Director and Producer of The Sparkle Thief, showing at Canterbury Christ Church University from 14 to 23 of December. Find out more and book tickets to The Sparkle Thief.