In memory of Samuel Paty, teacher.

In memory of Samuel Paty, teacher. 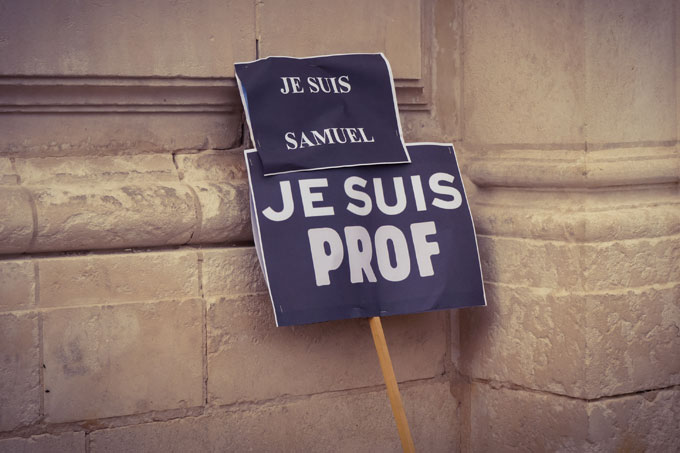 Dr Jim Butcher explains why we need to defend values of free speech.

On 16 October in Conflans-Sainte-Honorine, in the Île-de-France region in north-central France, a teacher was executed. During a moral and civic education class discussion about freedom of speech on 6th October, Paty showed a class of teenage pupils caricatures – including of the Prophet Mohammed – from the satirical newspaper Charlie Hebdo. He was targeted on social media, and killed by 18-year-old Abdullakh Anzorov, a resident in France for 12 years. Others face charges relating to complicity.

Previously, on 7 January 2015, two Islamist gunmen forced their way into the Paris headquarters of Charlie Hebdo and opened fire, killing twelve. This was in response to the original publication of these satirical cartoons some years earlier.

Paty was showing these caricatures in a discussion about the challenges for the media and society in engaging with images some consider offensive. He may well have been using them to present the various arguments for and against showing them: those of free speech advocates; liberals who caution against offending others; media proprietors and editors who argue they don’t want to risk the safety of themselves their staff; and Islamists (and some Muslims) who say they find the images offensive. He was doing his job – a vital one. In showing cartoons some find offensive, he was doing what anyone should be able to do without fear.

The local mayor Laurent Brosse was reported on BBC News saying Paty had ‘wanted to open the minds of his pupils’. French President Emmanuel Macron said he had been murdered because he ‘taught freedom of expression’. In France the public have showed their outrage at the attack.

Here in the UK, the response – in the media, from teaching unions, universities – has been muted. It should not have been.

Paty was an everyday hero. By all accounts, a terrific teacher, committed to the secularism and liberty enshrined, albeit not always practiced, in French society. As a teacher, Paty embodied values that affect all educators and education itself. Those values cost him his life.

It is important to defend secular humanist values of free speech, and also academic freedom, in the face of intolerance of whatever stripe. We can disagree, sometimes vehemently. We may, at times, feel offended. But if we allow the liberty Paty discussed with his students to be diminished, then the intolerant will have won a victory.

Dr Jim Butcher is a Reader in the Christ Church Business School.