Crisis in the Suez: the Ever Given ship. How might it impact us?.

Crisis in the Suez: the Ever Given ship. How might it impact us?. 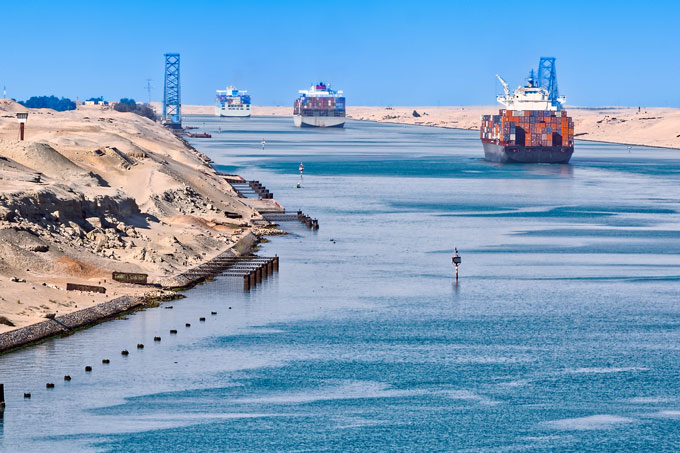 Dr Jake Monk Kydd explores the ramifications to international trade following the blocking of the Suez Canal by a giant cargo ship.

We live in an age where we are more connected than ever before, the spread of the corona virus has shown us this in the starkest way possible over the last year or so. The pandemic has also shown us the inherent weaknesses in global logistics. In an age of lean supply chains small variations can upset this finely tuned system be it for the provision of Christmas retail goods, fresh raspberries on our supermarket shelves in January, or essential stocks of PPE equipment in an international crisis.

One ship blocking the vital link between Asia and Europe should be seen as a concern for everyone. Some 90% or world trade relies on shipping, and around of 12% of global trade passes through the Suez Canal. While Egyptian engineers are working non-stop to remedy the situation of this mega ship blocking the canal to all traffic, the ramifications are potentially immense and widespread.

The Ever Given is no ordinary ship. At 400 metre long the ship has the capacity to carry huge cargoes on every voyage, in the region of 19,000 shipping containers in fact. The Ever Given weighs some 220,000 tonnes, by comparison a typical cross-channel ferry would weigh around 30,000 tonnes.

The blocking of the canal is also currently delaying almost 200 hundred ships with so many more millions of items bound for markets in Europe and beyond. Every day that passes sees around another fifty ships join that tailback. The ship’s Japanese owners and insurers already face claims from others impacted by the situation, not least rival shipping lines and importers. In the interim companies will be calculating the impact that the delayed deliveries will have on them, and ultimately their customers. One immediate impact was a rise in the price of crude oil by 6% on Wednesday this week (24 March 2021). Fluctuations in the price of crude will always have an impact on markets, industry, retailers and consumers around the world.

If the canal authorities are unable to refloat this behemoth quickly then the unloading of the containers will be the next step, perhaps including the unloading of its fuel too. All of this would be time consuming and adding to the impact on global logistics and eventually us, their ultimate consumers.  All may not be lost of course. The canal does have tides and the next high tide might be enough along with the digging and the five (soon to be eight) tugs working along the Ever Given, to release the ship from the grounding.  In a worst-case scenario steaming via the Cape is an option. This however would add two weeks to the sailings in both directions and would disrupt future cargoes for a long time to come.

Hopefully by the time you read this the canal will be running again.  If this is the case then this does highlight the perils of sending such huge ships with such narrow margins through such a confined waterway.  It also highlights the fragility of the global logistics systems and how any glitches in this system can impact people who didn’t realise that they were in part dependent upon it in the first place.

Dr Jake Monk Kydd is a lecturer in Retail Management in the Christ Church Business School.