Climate emergency, coastal change and the need for a workable solution.

Climate emergency, coastal change and the need for a workable solution. 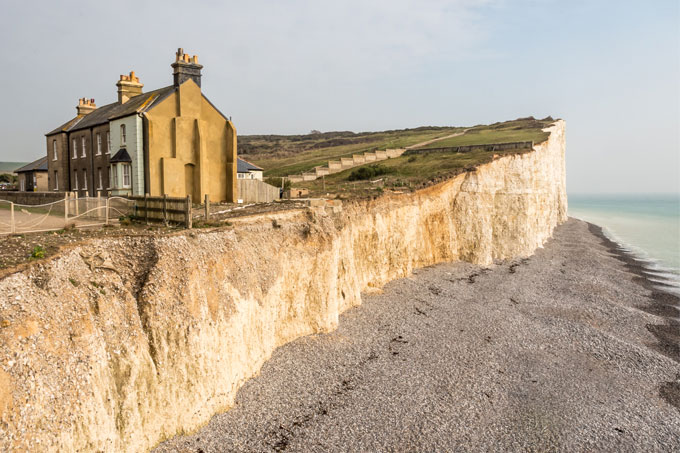 Dr Chris Blunkell examines the government’s policy for supporting homeowners and communities at high risk of losing everything to the sea.

The Environment Agency Chief Executive, Sir James Bevan, recently made a speech to the Flood & Coast 2022 conference, the subject of which was climate change and the limits of flood protection. This should be of particular interest in a county with a coastline as long as Kent’s – or for some, at least. In many ways the speech was unremarkable – as is often the way with these things, it was largely a restatement of the current policy shaped gently for that particular audience. One or two thing stuck out, however.

The first was the stress he placed on the climate crisis being the main challenge facing humanity, and that it requires rapid action, funding, political will and the overcoming of institutional barriers. The second, in the context of the implications of sea level rise and coastal erosion for those who live on the coast, was that it accepted that some aspects of the government’s approach to adaptation – living with change – are controversial.

Government follows an efficiency model of decision making, which is to say that it relies on getting bang for its buck. For most coastal dwellers living in vulnerable areas, the government’s sums for continuing to protect stack up – for example, by building more substantial sea walls. However, those sums do not always add up in areas that have smaller populations and fewer assets. Controversy lies in that the government has no statutory requirement to protect anybody, although in practice the public purse protects most people and assets. Those who do not qualify are not compensated for the loss of their homes, and indeed until fairly recently were required to pay for the cost of demolition on top of the trauma of being moved on.

One broad school of thought is that coastal erosion and changes in sea level are natural phenomena and that anyone buying a house in an area vulnerable to the sea must accept the consequences of their decisions. Another is that settlement patterns are the result not only of natural processes and individual choice but also the decisions and actions of various institutions. The clifftop village of Happisburgh in north Norfolk is a case in point. That it is a coastal settlement at all is the result of changes to the landmass over centuries. However, in recent times settlement was underpinned by some extent by state-funded protection which was then allowed to fail. Can we still say with confidence that the homeowner must shoulder the risk, especially given the acceptance of anthropegenic climate change and its effects by the relevant policy makers?

The reality is that we will continue to see building on flood plains, and that this and similar dilemmas will not simply go away. Government’s interest in adaptive management – living with a degree of change on our coasts rather than relying on protection alone, and looking for environmental benefits in so doing – has much to recommend it, but with caveats. Work on equitable outcomes for those affected by it is vital. Their numbers may be small, but for most people losing a house is a financial blow from which they may never recover.

As things stand, the number of houses expected to be lost to the sea in the short term is relatively small. However, in the coming decades it is projected to become much higher – with the east and south west coasts particularly vulnerable. The government’s Coastal Transition Accelerator Programme, now up and running in Happisburgh and East Riding is looking at a variety of resilience and adaptation ideas, including finance mechanisms that could help move communities from areas at particularly high risk. I very much hope this identifies something that works, although a project with a similar brief undertaken ten years ago rather died a death.

I also hope that Sir Richard’s endorsement of the climate change emergency and apparent acceptance of the need to find viable alternatives for those displaced by coastal change leads to a workable solution. We also need a new language, with concepts such as adaptation and resilience as commonly used too vague to ask important questions as to who pays, who benefits, who loses and who gets to make decisions.

The great pity is that getting stuck on this issue has inhibited what has otherwise been a broadly sensible and strategic government policy approach in the early 21st century – to work with nature and conserve the environment, and in so doing resist the temptation to build an ever-higher ring of concrete around the country.

Dr Chris Blunkell is a Lecturer in Work Based Learning for Christ Church Business School.