Cartography and the Kuznetsov.

Cartography and the Kuznetsov. 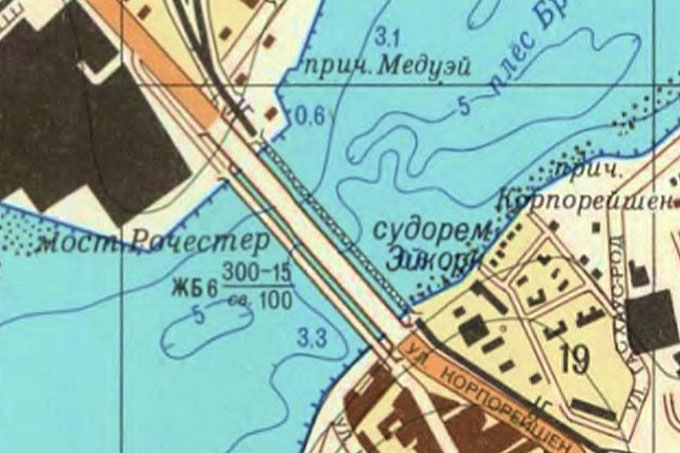 As a Russian naval task force enters the English Channel, Dr Alexander Kent, Reader in Cartography and Geographic Information Science and Martin Davis, University Instructor, explain that the maps and charts they will be using owe to a long tradition of mapping Britain in secret.

It is both fascinating and chilling to realise that during the Cold War, the Soviet Union mapped everywhere on the globe as part of its military mapping programme. The UK received special attention, with at least 90 of our cities mapped in stunning detail, including street names, the classification of strategically important buildings, the depths of rivers, and information about the carrying capacity, width, length and construction material of bridges. Where possible, even the height of the bridge above water is indicated, which is something more likely to have been recorded by a spy on the ground than by using satellite imagery. So it is amazing to consider that, while Ordnance Survey builds its new national database to prevent lorries from getting stuck on our roads, the Soviet Union was busy collecting this sort of information decades ago.

The level of hydrographic detail on the Soviet maps is just as staggering. Submarine contours (isobaths) are plotted in detail, as are other types of information such as whether a river is navigable, how fast it flows, the consistency of the river bed, as well as tidal information. Much of this information is believed to have been gathered from Soviet fishing trawlers and other ships visiting ports in Britain and around the world, particularly as the details between Soviet maps and contemporaneous Admiralty or other charts usually do not match.

It is always tempting simply to label the Soviet maps as invasion plans, but they could have been used for so much more than that, particularly for running the country after a successful Communist coup d’etat. Although they were produced in secrecy, the maps are now openly available online from a variety of retailers outside Russia, including Jana Seta, a map shop in Riga, Latvia, which discovered and purchased several tonnes of maps after the Red Army withdrew in 1993. Many libraries around the world have acquired stocks and Canterbury Christ Church University maintains one of the largest collections of Soviet city plans in the UK.

Even though they are a product of the Cold War, the maps are far from irrelevant. Landmark, an environmental consultancy firm based in Bristol, uses Soviet maps to identify buildings not shown on OS maps, while archaeologists have used the maps in Central Asia to locate sites which are not marked on any other available maps. For some places around the world, they still present the most detailed and reliable source of geospatial information available. For the Russian Navy, they are the ancestors of the digital navigation systems they will be using to steam through the Channel.

The University is making an important contribution to the study of Soviet maps. Martin Davis, who is currently studying for a PhD on the topic, has just returned from presenting his research on accessing Soviet maps at the International Cartographic Association’s History of Cartography conference in Dubrovnik, while Dr Kent gave an invited lecture on the maps at the National Geospatial-Intelligence Agency in Washington, DC with expert John Davies of Sovietmaps.com. Davies and Kent’s book ‘Red Planet? How the USSR Secretly Mapped the World’ will be published by Chicago University Press next year and John Davies will give a talk at the University on 25th October.