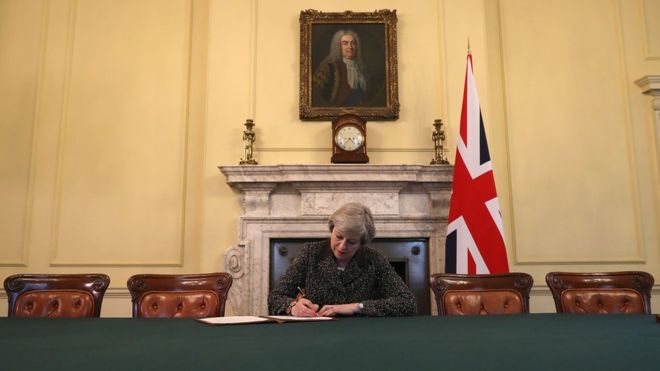 Dr Keith McLay comments on the photograph of the Prime Minister signing the Article 50 letter below a painting of Sir Robert Walpole.

Much has been made of the gaze of Sir Robert Walpole, reputedly Britain’s first Prime Minister, 1721-1742, over Mrs May’s shoulder as she signed the letter to the President of the European Council, Donald Tusk, invoking Article 50 of the Lisbon Treaty and thereby starting the clock ticking on Britain’s negotiated exit from the European Union.

The main historical parallel drawn has been the constitutional lineage of British Prime Ministers exercising an executive function on behalf of the Crown and the British people.  However, given that Sir Robert – a Whig not a Tory – refused to recognise the Prime Ministerial title, labelling it in a speech to the House of Commons in 1742 as composed of ‘mock dignity’, he would have rejected this constitutional analogy. A more apposite correlation between the Prime Ministers, and one that would have found favour with Sir Robert lies in a foreign policy which seeks to extract Britain from Europe.

In Walpole’s day, the concern was not withdrawing from European governance or institutional and legal frameworks but rather keeping Britain out of European conflicts. In 1721, when Walpole consolidated his position as First Lord of the Treasury, Britain had been fighting on the European continent pretty much without interruption for 30 years. Walpole’s view was that Britain must largely disengage from European diplomacy and certainly avoid further involvement in European wars. Walpole argued that his policy, which the Tories considered unpatriotic and pacifistic, was best designed to stimulate the economy by reducing the land tax receipts spent on ‘foreign’ wars while also stabilising the Hanoverian succession of 1714 by neutralising the threat of European powers and potential wartime adversaries supporting the exiled Stuart Court and its Jacobite followers.

For some 15 years – much longer than the Brexit negotiations are scheduled to take – Walpole steered this course with some success; notably he was able proudly to tell Queen Caroline in 1734 at the height of the pan-Europe War of the Polish Succession, ‘Madam there are 5000 men slain this year and not one Englishman’. However, Walpole’s policy of constructive disengagement and non-involvement became increasingly under pressure. He found that pre-existing and new Treaty obligations to European powers were not easily side-stepped or renegotiated to support his foreign policy. Moreover, from 1735 British merchants began clamouring for support and protection of their trade in Europe. The mercantile communities viewed Europe as their main market and stoked a populist campaign against Walpole’s European disengagement and failure to intervene to secure British traders and European trade routes. When, in 1738, Captain Robert Jenkins testified to Parliament about the unchecked actions of Spanish privateers against British traders, which allegedly saw Jenkins hold up his Spanish-severed left ear, Sir Robert was forced to comply with popular and parliamentary opposition to his foreign policy and involve Britain in the War of Jenkins’ Ear, 1739, which soon broadened into the War of the Austrian Succession, 1740-48. Famously telling his Secretary of State, Thomas Pelham-Holles, 1st Duke of Newcastle, ‘It is your war and I wish you joy of it’, Walpole’s political support for his foreign and European policy and thus his command of the Commons was set on a sheer decline; he resigned two years later.

So, for those of a nuanced historical perspective, Sir Robert Walpole, Britain’s first Prime Minister and a politician who commanded the domestic political heights for over 20 years, is saying to Mrs May over her shoulder in the cabinet room: disentangling and staying out of Europe is tricky, very tricky.

Dr Keith McLay is the Dean of the Faculty of Arts and Humanities at Canterbury Christ Church University and an early modern military historian.