Last week saw a group of staff developers (I wonder if there is a collective noun…a workshop of developers, a mindmap of…a dazzle of…any suggestions on a postcard please) from Universities across the country meet in a skyscraping hotel in Birmingham to share ideas, network and learn together.

Since joining HE a couple of years ago I have been searching for a broad community of practitioners in my field of staff development and organisational development (OD). I spent many years in the NHS where I had a strong sense of identity with other OD colleagues both regionally and nationally. Within CCCU I am part of a great team, and have instigated a community of practice of staff developers across the University too. Attending the SDF conference enabled me to network more widely – particularly with some colleagues I had connected with through Twitter. A few months previously I had responded somewhat nonchalantly to a call-out about setting up a monthly tweetchat on the topic of Coaching in HE; it has now become a real success. I finally got to meet the others in the group in person, and we received a Highly Commended Award for Developing Excellent Practice. 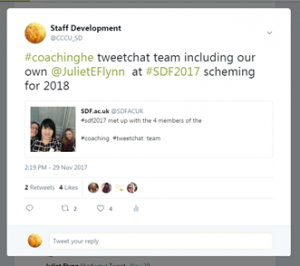 There were workshops on coaching, leadership, learning technology, team development and neuroscience. My personal favourite moment was exploring moments for leadership through Shakespeare’s Henry V – a powerful story indeed. All the presentations are openly available if anyone is interested: SDF conference

I was reminded as I wrote this of the recent CBBC campaign to Find Your Tribe – encouraging children to recognise and celebrate their interests, skills and passions (link here if you are interested). Whoever your tribe are, I would encourage you to go out there and find them.