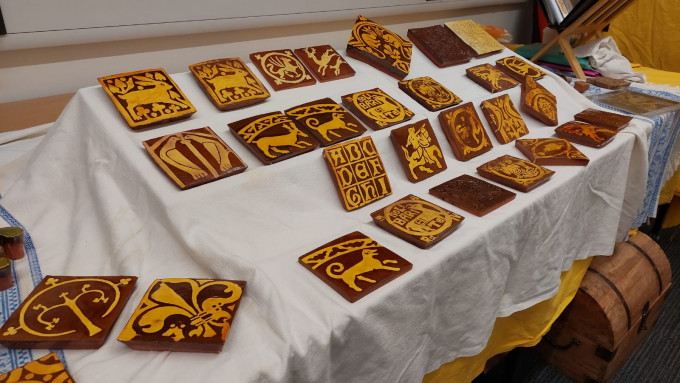 This week is a case of playing catch up, firstly mentioning Dr Diane Heath’s highly successful ‘Medieval Animals Heritage’ pre-Christmas extravaganza and then her ‘Amulets’ conference at the Science Museum before coming to a further preview of the Tudors & Stuarts 2023 history weekend because hopefully the website and booking pages will go live very soon!!

Unfortunately, I wasn’t able to be at Saturday’s fun-filled workshops for SEND children and their families, but it was great to hear that Diane had been ably supported by, among others, Martin and Michelle Crowther, Laine, who came as a Christmas elf, and Amber, Eli, Harry and Leo. Moreover, ‘Kate the tiler’, last seen at the Kent Pilgrims Festival at the Maison Dieu in Dover earlier in the autumn, was there leading a workshop on tile-making, as well as giving Diane her tile which she had made at the Maison Dieu and was now finished having been fired in the kiln. Other activities involved splatter-snow card and sparkly bell making, as well as the chance to create a festive hat and fabulous beast tree decorations. Such opportunities were appreciated by children and parents alike, including a present of a festive bell, which was the first thing one boy had ever made for his mother – fantastic milestone for the whole family! Also important was the chance to share pizzas and other party food, giving all concerned a chance to get to know each other better and provide good experiences and memories for everyone present. Thus, this was a fitting end concerning the ‘Medieval Animals Heritage’ project for 2022, perhaps exemplified by Diane’s version of the ‘Twelve Days of Christmas’ with animals for each day that involved appropriate noises – always popular for who can resist such an opportunity!!

Then on Monday Diane headed to London with Dr Catherine Cooper and Eli, who as a third-year undergraduate in Medieval & Early Modern Studies is studying aspects of folklore for her final-year dissertation, for her ‘Amulets’ conference at the Science Museum. She had organised a busy day of presentations and a gallery tour, the latter led by Curator Sarah Bond who wanted to show and talk about Eleanor Crook’s modern ‘Santa Medicina’ bronze statue, which is full of amuletic allusions. For those interested, please see: https://collection.sciencemuseumgroup.org.uk/objects/co8636476/santa-medicina-sculpture-by-eleanor-crook-sculpture for more details.

However, it was not just a day for watching and listening to presentations because much of the time was taken up discussing all aspects of the role of such objects in a wide range of different societies and across time. For it is clear that these matters are in some ways intrinsic to human beings, the idea of the talisman seen as something that can cross all cultural boundaries. This is part of an ongoing discussion concerning putting together a joint project involving partners inside and outside Higher Education to the AHRC with the idea that it will be submitted in the early months of next year, so Dr Claire Bartram and I wish Diane and her collaborators every success with this exciting and ground-breaking venture.

So now to Tudors & Stuarts 2023, and, as always, we at CKHH are extremely grateful to our great speakers who generously give freely of their time to bring fantastic lectures to Canterbury, thereby helping postgraduates, and indeed sometimes this is the only way prospective students can undertake a doctorate, to study a wide range of topics on Kent’s history. As a ‘gateway county’, Kent’s history is important for the insights it can provide concerning an incredibly wide range of topics and chronologically from pre-Roman to modern times. This is exemplified by the subjects covered by those who have successfully completed and those who are current students, while there are plenty of other themes that have yet to be explored.

Having mentioned several speakers in previous weeks, I’m now going to turn to a few more to highlight the diversity of the programme, which as always meaning those attending can select their own schedule based on their own interests, the ultimate ‘pick-and-mix’! For an international flavour, I’m delighted to be welcoming Dr Ben Marsh, who will explore some of the commodities – sugar and tobacco, of course, but also things such as silkworms – that became the centre of British expansionism into the Atlantic World under the Stuart monarchs.

Similarly international, but the world of ideas and specifically religion, will form the subject of Professor Alec Ryrie’s talk where he will be examining the persistent Protestant missionary dimension to English expansionism. Most especially in North America, but as he will explain, also in the Caribbean and in the Near East, as well as elsewhere. Not that these were successful, and Alec will explore the problems of these early Protestant missions, which he believes reveal important truths concerning the nature of the period as a whole.

For those interested in more specifically English issues at home, there are a wealth of aspects to choose from. Thinking about Kings & Queens, we move from Professor Richard Hoyle and Henry VIII’s succession crisis to Amy Licence’s assessment of the marriage alliance between his daughter Mary and Philip of Spain, equally a matter of succession planning. The Stuarts offer very different aspects of monarchy, from Professor Kenneth Fincham’s assessment of factional intrigue at the court of James I to Professor Maria Hayward’s discussion of Charles II’s famous and notorious mistress, who as a woman of humble origins rose to create for herself a unique space in London Restoration society.

If you fancy finding out more about the lives of people lower down the social scale, there are fascinating lectures for you too, including Professor Steven Gunn’s investigation of coroners’ inquests that offer insights into the lived experiences in Tudor times of ordinary men and women. Professor Vanessa Harding will similarly explore the lives of these social groups, although she will take us to early modern London, while Dr Elaine Leong’s research into early modern medicine will provide us with great insights into two 17th century health objects – Sir Richard Carew’s warming stone and George Hartman’s ‘ingenious engine, and we’ll probably similarly find out about two-feet long ear trumpets!

Furthermore, the Canterbury guided tours will be back again because these iconic events, a feature since our first Weekend in 1996, help to make the Canterbury History Weekend extra special, our trademark you might say. Consequently, Professor Paul Bennett intends to explore early Tudor Canterbury, starting at the Bullstake, while Cressida Williams will introduce her groups to treasures in the cathedral archives and library.

Now this is not everything respecting our speakers and their chosen subjects, but hopefully it has given you a flavour of what will be in store. We have kept the ticket prices as they were in 2016, and I’m afraid we have no option but to keep at that level because of the financial pressures on the History Weekend. Nevertheless, we hope to see you there, and Craig and his wonderful team will have a book stall in Old Sessions and an author signing table nearby. And you never know, next week we may be up and running!!