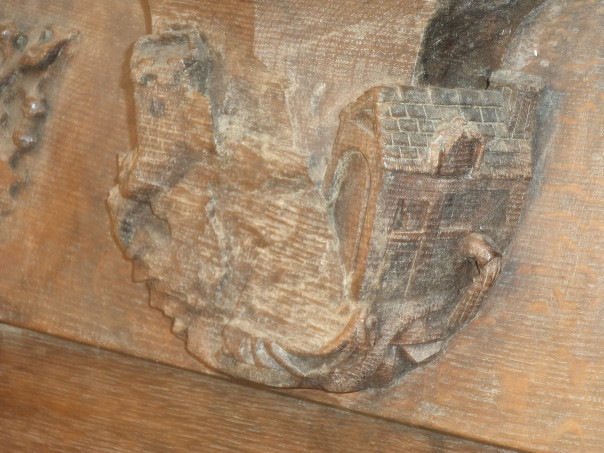 As the university comes to the end of its Diamond Jubilee year, I thought I would mention Emeritus Professor Peter Vujakovic’s leading role as organiser of The Christ Church Science A – Z.

For it is a great read whether you use it as an Advent style calendar looking at a letter a day or binge read on lots of letters at one go. Among your choice of topics are those contributed from beyond the sciences and social sciences and the two I want to draw your attention to in alphabetic order are ‘H is for Hospital’, medieval hospitals, of course, because Canterbury has the two earliest post-Conquest hospitals, Archbishop Lanfranc’s institutions of St Nicholas’ leper hospital at Harbledown and St John’s hospital for the poor and infirm in the city’s Northgate, and ‘K is for Kent Maps Online’. So, please do have a look here: https://medium.com/the-christ-church-science-a-to-z to see these and other interesting letters.

If this had been a Kent style alphabet, I think I would have gone for ‘R is for Revolt’ because following on from the success of the ‘Resistance and Revolt in Kent: from the Conquest to the Present’ conference back in September: https://blogs.canterbury.ac.uk/kenthistory/rebellion-over-the-centuries-the-kentish-experience/ I had a meeting with Professor David Killingray, Dr Elizabeth Edwards and Stuart Bligh, all members of the Kent Archaeological Society’s Publications Committee, about how we might take forward the idea of creating another Kent history volume.

As regular readers of the blog will know, Elizabeth, Stuart and I edited Maritime Kent through the Ages (Boydell, 2021) as well as holding two conferences: https://blogs.canterbury.ac.uk/kenthistory/maritime-kent-book-conference-and-postgraduate-projects/  while Elizabeth and David are finishing off editing Migration in Kent through the Ages, going to the publisher at the beginning of 2023 and hence the idea to get going on the next volume. This is still very much at the drawing board stage but as a consequence of our discussion we do have the outline of an exciting plan and we’ll meet again in February to pull together ideas and map out the way forward – watch this space!

Keeping with the KAS link, this coming Saturday I have another KAS Affiliated Local History Societies online forum as a means of bringing Local History Societies together to discuss what has been happening in the county over the last nine months, to exchange ideas and suggestions about the high points and difficulties groups have been experiencing, and to find out if there are ways KAS can assist societies, whether it is through research training workshops, as a platform to publicise the work and activities societies’ undertake or to offer events that societies feel their members would like to see happen. Furthermore, this Saturday the idea is to introduce Peter Joyce to these society representatives because, as well as being a doctoral student and a member of the Kent History Postgraduates in the CKHH, he is KAS’s new Outreach and Events Officer. Again, regular readers of the blog may remember that Peter, with the Royal Engineers at Gillingham, recently organised the Medway History Showcase: https://blogs.canterbury.ac.uk/kenthistory/canterbury-and-medway-bringing-history-alive-in-kent/ which was a great success and will be repeated in 2023, with a similar second event at Canterbury (the one in 2022 was also successful as you can see: https://blogs.canterbury.ac.uk/kenthistory/mcw2022-and-kent-gateway-to-the-world-history-festival/ ) highlighting similar research activities by groups in east Kent.

Among the events Peter has already organised for KAS was the presentation last week by Michael Wood at Maidstone Museum to mark forty years since Michael’s publication of In Search of the Dark Ages. Having recently re-edited and expanded the book to include more chapters, Michael was keen to explore the results from archaeology and manuscript studies that have enhanced our understanding of this period of history during recent times. Consequently, both in the book and for his presentation, he discussed how we now know much more about the East Anglian kings from recent excavations at Sutton Hoo, how we now have a greater understanding of the importance of the Canterbury School and the extraordinary lives of Theodore and Hadrian, arguably the most important African in England’s history, as well as how we can write the histories of at least some early medieval women, especially those of several of King Alfred’s female descendants.

This was the second time in a week that Michael had been in Kent because the previous week he had been at the Folkestone Book Festival. Christ Church is a major sponsor of the Book Festival which means the CCCU Bookshop had a bookstall there and that night Colette had been in charge. A full house, on an especially wet evening, had, as at Maidstone, listened attentively as Michael and I did an in conversation-style event where he similarly discussed Theodore and Hadrian, what we can understand about the lives of noble and royal women during this period, and the role of first Alfred and then Athelstan, not only as warriors but as kings who understood and valued the Church, the vernacular as a means to disseminate learning, and that books could be as important as swords in the building of the kingdom of England. This was great and hugely enjoyable, as was evidenced from the Q & A session towards the end of the evening, the audience members keen to ask a wide range of questions and to talk to Michael afterwards while he was signing copies of his book.

Furthermore, while we were talking afterwards, the question of medieval hospitals came up and it seems the foundation, or more likely the re-foundation of St Bartholomew’s hospital at Sandwich may be a later example of something Michael has been investigating. This medieval hospital as a civic-governed institution is fascinating, not only because of the link to the battle of Sandwich in 1217, which is the aspect Michael is interested in, but for the annual procession on the feast day of St Bartholomew from St Peter’s church in the centre of the town to the hospital on the outskirts. And taking this a stage further, for a fascinating incident in 1532 when the procession did not take place and the repercussions that followed because this event and its aftermath offer some great insights into the Reformation at grass roots level in Kent. It is something I looked at several years ago in an article in Negotiating the Political in Northern European Urban Society, c.1400–c.1600 (Turnhout, 2013), and I was reminded of that this week when with a group of second-year undergraduates we were exploring the Reformation and Reformers through the depositions collected by Archbishop Cranmer for what is commonly called the Prebendaries Plot. This, too, offers a great, indeed wider ie diocesan snapshot of the strife the religious changes brought to Henry’s kingdom, something I explored more recently in an article in The Experience of Neighbourhood in Medieval and Early Modern Europe (Abingdon, 2022).

Remaining with the Tudors, there will be a Lossenham Project wills group meeting on Thursday of this week, always a pleasure to discuss progress with this great group of volunteers and we have another new recruit who is an expert palaeographer. And finally, this reminds me that as an update regarding booking etc for Tudors & Stuarts 2023, hopefully there will be some positive news soon from other parts of the university.