Animals and children – exploring the past.

Animals and children – exploring the past. 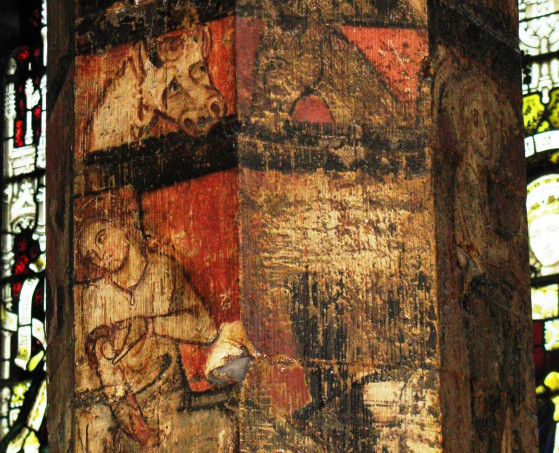 Even though I’ll be highlighting in a couple of weeks’ time what events the CKHH will be involved in during the early months of 2023, I thought I would just mention a couple of dates, as well as Dr Diane Heath’s ‘Medieval Animals Heritage’ event on Thursday 29 December.

Working chronologically, this event of Diane’s will be taking place on 29 December because that’s an important day in Canterbury’s calendar being the anniversary of Thomas Becket’s martyrdom in 1170. Sadly, I won’t be able to be there unless I get stuck in Canterbury due to the (lack of) action on the rail network, but Diane will be joined by amongst others Martin and Michelle Crowther on the SEND Medieval Animals Safari at St Mary of Charity parish church in Faversham. If you are or know of families who would like to take part in this free event, this is the Eventbrite link and booking is now open: https://www.eventbrite.com/e/send-medieval-animals-safari-tickets-488675630967?aff=ebdssbdestsearch&keep_tld=1

As well as activities in the church, including finding out about the animals on the ‘painted pillar’ – do look out for the dog, my favourite there, the idea is to visit the Faversham charters exhibition. Diane will be providing refreshments because looking for medieval animals in churches is thirsty work and the church has kindly given permission for this to happen. All your exciting discoveries will go towards the virtual bestiary (Book of Beasts) on the project’s website.

Moving into 2023, now that Peter Joyce is the Kent Archaeological Society’s Outreach and Events Officer, CKHH has another link into KAS and as advance notice Professor Ken Dark will be coming on Tuesday 7 February to give a lecture at St Paul’s church, Canterbury (wholly appropriate given the abbey link) on the chapel of St Pancras at St Augustine’s abbey. More details to follow but do save the date.

Working this time with Cressida Williams in Canterbury Cathedral Archives and MEMS at the University of Kent, the programme for the ‘Church, Saints and Seals, 1150–1300’ study day at Canterbury Cathedral is now up and again booking has opened. As well as presentations by experts, there will be a visit to the archives and conservation studio. Booking and further details: https://www.canterbury-cathedral.org/what-s-on/events/11march23-church-saints-and-seals-1150-1300/ is available here.

I’m still awaiting an update on progress from other parts of the university regarding getting Tudors & Stuarts 2023 up on the CKHH website with the booking links, but please do save the dates Friday 28 April to Sunday 30 April because we have a brilliant group of experts coming to share their research and knowledge. I’ll bring you the links and website as soon as I have them.

To come back to more immediate times, last Saturday was the KAS Local History Societies Forum which, bearing in mind the current transport situation, we again held online. However, it did mean that there were society representatives from across Kent, including from Folkestone in the south to Dartford in the north-west and Maidstone in the centre. This is, I hope, a good way of bringing societies together, sharing ideas and suggestions, thinking about ways of overcoming difficulties some societies are experiencing, discussing options for training workshops and other events and bringing together local history groups with those in tertiary education who study Kent history. Additionally, this was the first forum held since Peter Joyce, also a doctoral postgraduate student at Canterbury Christ Church, has been in post in KAS, which meant it was a great opportunity to introduce him to the local history society representatives. More on this as things develop and certainly the idea is to have a several day workshops and/or conferences each year, as well as further presentations to provide a great programme of events for those in KAS, and those who are interested in the county’s history.

Keeping with this idea of the value of the cross-over between local history societies and those working in academia, this week was the last of the Kent History Postgraduate group meetings for 2022. Maintaining our programme of alternating between general catch-up meetings and presentations by one of the group this time it was Kaye Sowden, who in addition to researching early modern society in Pluckley for her doctorate, is heavily involved in local history there and at neighbouring Smarden.

Having started her research by examining the Dering family, she has been engaged in an in-depth study of the ‘Booke of Expenses’ which at its core covers about a decade in the early 17th century and offers a fascinating glimpse of the way the female family members were supported during pregnancy, at childbirth and the raising of Dering children during their early years. Consequently, Kaye first took us through three generations of the family, showing how they engaged in marriage alliances with several prominent families in Kent and London, and how they understood the importance of male heirs, having first established themselves through marriage to an heiress. With this as her context, Kaye then concentrated on Sir Anthony Dering’s second marriage to Frances Bell, by whom he had fourteen children. Her stepfather was Sir John Peyton who held the post of Lieutenant of the Tower of London which meant several of her children were born there because during her first 6 years of marriage she gave birth five times. Living at the Tower might be seen to have been advantageous because her mother was there and having such support during her frequent pregnancies, as well as when she gave birth was presumably both comforting and of huge practical advantage. For even though Anthony had several instruction manuals on childbirth, presumably the advice of older women who had experienced this and the knowledge of the local midwife were viewed as the best hope by the mother-to-be.

This is where the ‘Booke of Expenses’ is very useful because it contains records of the sums paid to named midwives, to other women who helped and to named wet nurses who cared for the Dering offspring for their first two years. Moreover, it seems other female members of the Dering family would stay during their last stages of pregnancy, and these probably tight female networks were an important aspect of family life. As a group, Kaye has found that the vast majority of the midwives were the wives of local yeoman farmers, and the wet nurses were seemingly drawn from the same social group. The one exception appears to have been a Mistress Ely who as a midwife may have been the wife of the vicar at Charing.

Another rite of passage might be seen as the baptism, and again the Booke of Expenses provides valuable information about the expenses involved, the listing of godparents and just how such occasions were important in cementing relationships among the network of gentry families in Kent. Additionally, they were valuable occasions for those serving as nurses, for such servants were often well rewarded, the higher the social status of the child’s family, the greater the sum received by the nurse who brought the 5 to 10-day old child to the church. Of course, the mother would not be present being seen as unclean in the eyes of the church until her churching at 6 weeks, during this time being in the care of her keeper, again often a local yeoman’s wife. For the wet nurses, it seems they could form a strong emotional bond with their charges, and it is likely that this type of service had implications for their own fertility and thus the size of their own family.

Kaye is still trying to find out more about the Dering servants, not least because they seem to have had very few who lived in and even the numbers of waged and daily servants appear low for the family’s status. However, there do seem to have been strong links between the servants and their Dering masters and mistresses which could stretch over many years, and Edward Dering, Sir Anthony’s eldest son, paid for his servants’ clothing, as well as such things as the rent to ensure they could live nearby. These ties of a household community within the larger village community are extremely interesting and will provide the starting point for Kaye’s next part of her project – looking at the lives of the local craftsmen and yeomen, that will lead on to thinking about inhabited space, landscape and buildings. Such an approach seems hugely sensible, and it will be fascinating to see how her research develops.

As you might expect, her presentation sparked an interesting and wide-ranging discussion, including some consideration of early modern gentry households, other families linked to the Derings, and matters relating to servanthood during this period, both those engaged in the house and as estate workers. Thus ended another excellent year for this growing group of doctoral students working on Kent topics, so do watch this space for more reports in 2023.