This week I’m exploring what we have planned for 2020.

‘Places, spaces and thresholds’ and looking back to the Centre’s ‘top 7’ for 2018

First of all – advance notice that on 3 January 2019 the essay collection edited by Drs Diane Heath, Victoria Blud and Einat Klafter on Gender in Medieval Places, Spaces and Thresholds will be available ‘in all good bookshops’, or you can pre-order now at: https://www.sas.ac.uk/publication/gender-medieval-places-spaces-and-thresholds . Published by the Institute for Historical Research, it will also be available to download at: http://humanities-digital-library.org/index.php/hdl . To celebrate this excellent event, the book will be launched at the Gender and History conference at Durham in January, with a follow up launch at Canterbury Christ Church because of the involvement of CCCU historians and that the book comes out of the Gender and History conference held here in 2017.

I must admit I thought the Centre was busy in October, but things really move up a gear in November. Starting with the event in the Powell Building next Friday to mark the centenary of the signing of the Armistice that Dr Martin Watts is heavily involved in. For details of the talks, readings and music, please call 01227 922994. The following week will see Professor Louise Wilkinson speaking to Canterbury Historical and Archaeological Society on ‘Women and chivalry’ in Newton, Ng03 at 7pm on the Wednesday and then on Saturday 17 November will be the ‘Exploring Kentish Naming Practices’ conference (with Kent Archaeology Society) www.canterbury.ac.uk/kent-names .

Because ‘War Horse’ has arrived in the cathedral precincts, I thought I would again draw attention to the ‘100 Years since Armistice’ event that will be taking place on Friday 9 November at Canterbury Christ Church. Details of the talks, music and readings during the day-long programme are available by calling 01227 922994.

Before I come to the Nightingale Lecture, I just thought I would pass on several news items, and perhaps from the Centre’s perspective the most exciting is that the Tudors and Stuarts 2019 History Weekend webpages are now live thanks to Matthew Crockatt and Ruth Duckworth at the box office. Tickets can be booked from Monday 1 October and the short web address is https://www.canterbury.ac.uk/tudors-stuarts there is also a link on the Centre’s home page under ‘History Weekends’ and if you have any problems, please do contact Ruth at artsandculture@canterbury.ac.uk or phone 01227 782994 (office hours Monday to Thursday). I hope that you like what you see in terms of choice as you build your pick-and-mix package.

Young Archaeologists as part of MCW2018

Before I get down to the news this week, and even though I don’t yet have the final figures, I thought I would update you on what I think the Medieval Canterbury Weekend 2018 has raised for the Ian Coulson Memorial Postgraduate Award fund. As I reported in February, we at the Centre had intended to use the Michael Wood lecture in October 2018 to raise £2,000 for Canterbury Archaeological Trust after the disastrous break-ins to the Trust’s artefact stores. This lecture will now come under CCCU’s Open Lecture series, so instead we have decided to give £2,000 from the proceeds of the Weekend to the Trust, with the remainder of the surplus after costs going to the Ian Coulson Award fund. In round figures, I think this means about £8,000 to the Award fund, which I think is excellent and is due to you, our audiences, being prepared to come to Canterbury to listen to history talks and to be guided around many of the city’s wonderful medieval buildings. Furthermore, I said I would let you know when Matthew Crockatt had set up the ‘legacy’ site for the History Weekends, including the twitter feeds, well he has done a great job and everything is available: http://www.canterbury.ac.uk/arts-and-humanities/research-kent-history-and-archaeology/history-weekends/history-weekends.aspx so please do check this out.

From Anglo-Saxons to WWII – exploring Canterbury, Faversham and the Royal Marines

I thought I would start with some very exciting news, Michael Wood has agreed to come to Canterbury to give an evening lecture on Tuesday 30 October 2018. The title is not yet confirmed but he will be speaking primarily about Theodore and Hadrian, thereby coinciding with a major new Anglo-Saxon exhibition that will be opening late October in London. More details will be available soon, and proceeds from the lecture will go towards the fund for Canterbury Archaeological Trust that was set up after the three disastrous break-ins this month at the Trust’s store at Kingsmead. These have resulted in considerable damage and the theft of finds, including Anglo-Saxon artefacts, which the Trust had excavated and archived in over forty years of work in Canterbury and Kent.

I was fortunate enough this week to attend Richard Eales’ lecture on ‘The English and the French in Norman Kent and Canterbury’ as part of the winter programme run by the Canterbury Historical and Archaeological Society [CHAS]. As a former lecturer at the University of Kent and now lecturing part-time at Canterbury Christ Church University, Richard Eales was well known to many of his audience that included past and present members of both universities, as well as people from Canterbury and the surrounding area. Although someone whose knowledge transcends time and space – he has studied and lectured on medieval topics as diverse as the Ottonian Empire to the Wars of the Roses, and from English castles to the crusader castles of the Middle East – he is an acknowledged expert on Norman England (and chess). Keeping with the former his lecture on Wednesday focused on matters of ethnicity and nationalism, in particular how did different groups within society see themselves, what were the markers of identity, how did matters of assimilation take place and what tensions were there during the period from Duke William’s invasion until King John’s loss of Normandy that precipitated baronial strife and Magna Carta, which presumably everyone is aware of this year. Among the issues he discussed were matters of language, the differing uses, roles and users of Latin, French and English, and of naming patterns. For example, among the Kent peasantry the use of English (Anglo-Saxon) male forenames declined far more quickly compared to their female counterparts, the charting of such matters of continuity and change made possible by the high level of survival of small land grants and rentals among the records of Kent’s numerous religious houses. 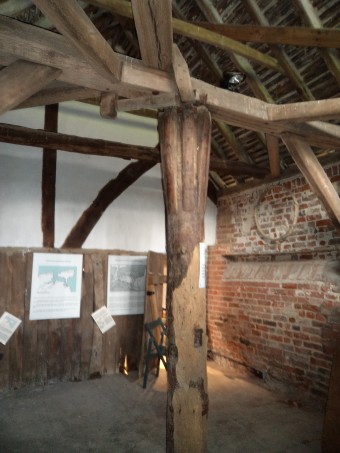 The medieval town crane at Fordwich, fantastic survival in the undercroft of this Cinque Port’s town hall

These issues of familial and individual identity among those below the elite have been studied by social and cultural historians interested in a wide range of different time periods, although because of such issues as industrialization, de-industrialization, total war and globalization, modernists and contemporary historians have perhaps been most noticeable in the literature and on TV. For the earlier periods, the continuing ‘love affair’ with kings, queens, lords and ladies has rather dominated matters, but historians such as Michael Wood, for example, and the popularity of the ‘Tudor Farm’, based at the Weald and Downland Museum at Singleton that I mentioned a couple of weeks ago, have drawn attention to the lives of medieval and early modern country and town dwellers. And, even more importantly, that the exciting questions that modernists ask about identity, community and social memory have been increasing applied to these earlier periods by a growing army of young academics, as well as certain older distinguished scholars.

The former will be well represented at two events organised through this Centre at Christ Church that will be taking place soon. The first, the one-day conference on ‘New Development in Kent [early modern] History’ is now only a fortnight away; and the second will be a study day on ‘How the Great War changed Kent’ on 23 May, which I mentioned last week. At the latter Dr Martin Watts will be joined by Dr David Budgen, among other colleagues from Christ Church. Martin and David will be giving short talks respectively, on the lives and experiences of men and women, and children during the Great War and its immediate aftermath, which will then be followed by linked workshops as a way of introducing a more hands-on approach. Details about this study day will appear on the Centre’s website in the next couple of weeks, so if you are interested please watch out for these and see how you can book a place.