Regional and local history at Durham and Canterbury

This is just a short piece before the Centre’s blog has a fortnight’s break for the summer. Consequently, I thought I would bring you up-to-date with things, including the fact that all the information for Tudors and Stuarts History Weekend 2019 has now gone to Matthew Crockatt, the Faculty’s web designer and organiser, and to Ruth Duckworth at Canterbury Christ Church’s box office, who handles the booking part of the web site. In addition, Finance has received the initial budget and although they are extremely busy with the financial year end, hopefully in the next few weeks the Centre will receive the relevant finance codes to ensure matters are set up properly. Among the many speakers who are due to come on Saturday 13 or Sunday 14 April are Dr Clive Holmes (Why Oliver Cromwell didn’t persecute witches), Dr Amy Blakeway (The downfall of Mary, Queen of Scots), Dr David Starkey (Henry VII’s Chamber), and Dr Miranda Kaufmann (Black Tudors). As at previous History Weekends, the idea is to generate a surplus which goes to support postgraduates researching Kent’s history through the Ian Coulson Memorial Postgraduate Award fund.

While I was away at Edinburgh and Durham, Professor Louise Wilkinson chaired the Becket 2020 meeting which involves groups and organisations in the city. Partly because of the time of year several people were away but among those attending were Dr Diane Heath and Penny Bernard, as well as Georgina Morton-Brown (English Heritage) from St Augustine’s Abbey. Diane and Penny had also met up the day before to discuss Diane’s ‘Medieval Animals’ project as an educational resource and at the moment they are working towards submitting an HLF bid later in the year. Equally, they are investigating more local sources of funding, especially following the experience gained working with Faversham Town Council and Swale Borough Council on the ‘Medieval Faversham’ exhibition. 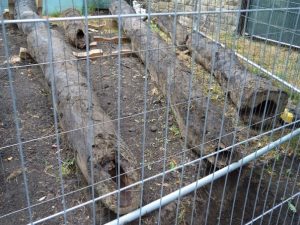 Elm water pipes – discovered during an archaeological excavation in Edinburgh

Edinburgh was a two-day ‘busman’s holiday’, and among the things I saw was this statue at the beginning of the Herring Road, a route that runs from Dunbar to Lauder, a distance of 45 km. This marks one of several routes in the Lammermuirs linked to the trade in fish, especially herring, and this route is thought to have been in greatest use in the 18th and 19th centuries, albeit such a fish trade is known from documentary sources to go back to at least the mid-17th century. Interestingly, according to this website, ‘the route was used by people bringing home a stock of salted herring for winter use and also by fishwives carrying huge creels of herring from Dunbar to the markets in Lauder. There are parts of the route where V-shaped gouges may be evidence of the repeated use of heavily laden carts or packhorses, perhaps trying to get through the mud.’ http://www.heritagepaths.co.uk/pathdetails.php?path=1 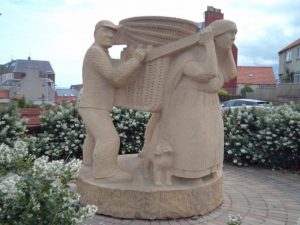 Marking the start of the Herring Road, Dunbar.

Now you might wonder why I have included this, apart from it being an attractive statue, but although not nearly as long, there was a ‘fish road’ between Whitstable and Canterbury, and one that pre-dates the Scottish road by several centuries. However, before coming to the Whitstable fishwives, I thought I would make a couple of observations about the Dunbar Herring Road. Firstly, the form of the fish shows that there has been a time lag between catching them and their transportation. Now I appreciate that this refers to modern not medieval times, but if this in anyway matches traditional practices and the storing of salted fish by households for winter consumption, this may fit with the earlier herring season for Scottish fishermen compared to their English counterparts, who followed the herring shoals down through the North Sea to the English Channel. https://blogs.canterbury.ac.uk/kenthistory/maritime-kent-from-faversham-oysters-to-dover-castle-and-hythe-fishermen/

For the fishwives of Whitstable, their route was far less arduous, and they were also aided by the Canterbury civic authorities who provided them with a ‘new’ market place in St Margaret’s Street in the fifteenth century. Although not that far from the city’s own fish market near to St Andrew’s church, it was sufficiently distinctive to give the Whitstable women their own space in the commercial landscape of central Canterbury. Moreover, St Margaret’s Street was one of the main streets the civic authorities wished to pave when they sought their paving charter from Edward IV in the early 1470s. 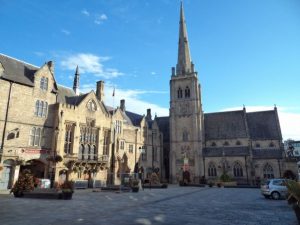 Leaving the fishwives, but keeping with the subject of gender, the conference at Durham University, organised by Professor Andy Wood, primarily brought together scholars from Britain and the United States, albeit there were two sessions devoted to issues of gender and authority in early modern France. One of the themes that came out very strongly over the three days was the value of regional studies to bring a comparable dimension to understanding the importance of difference as well as similarity, in addition to ideas about continuity and change. For customary practices were largely a product of the specific rather than the general that were often drawn on by those involved in disputes over enclosure, large-scale drainage schemes and changing agrarian systems.

Furthermore, this emphasis on the importance of regionalism and locality is not only appropriate for investigating economic concerns but is similarly pertinent regarding religious matters, and specifically issues of gender and authority. For example, for my paper on the Prebendaries’ Plot of the early 1540s in the diocese of Canterbury, I drew on the Toftes family of St Mary Northgate parish, Canterbury. Leaving aside the direct action of John Toftes, Margaret Toftes senior and junior were both reported for their lack of action, that is for not taking part in the parochial liturgy. The unnamed witnesses in both instances reported in 1543 that these women had not ‘crept to the cross’ for three years, the younger Margaret having failed to do so on Good Friday and Easter day, and perhaps even worse for the witnesses, both women had, moreover, stopped members of their respective households from performing this same rite. 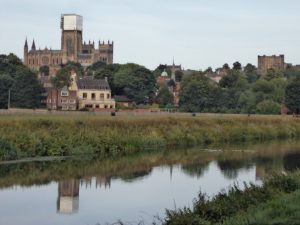 Durham cathedral and castle, like Canterbury a World Heritage site

Even though the witnesses did not report the direct speech of either woman, they did emphasise the public nature of their refusal to follow these time honoured devotional practices, the older woman said to have called it abominable idolatry and that she would creep to the Lord in her heart, which was the right sort of creeping. The younger woman’s fault may have been viewed in some ways as even more disruptive of authority and the wellbeing of the parish because she was noted as openly saying on Good Friday in the church that it was abominable idolatry to see [this creeping]. Whether Margaret was following her husband’s lead is not clear, but by proclaiming her evangelical views where and when she could be heard by the conservative vicar and most of the congregation as they performed this devotional rite on one of the most sacred days in the Christian year can only have been deeply upsetting to many, especially because it was uttered by a woman. Although, conversely, that may have been envisaged as even more empowering by those who were of her religious persuasion, possibly including members of the Toftes’ household and certain of their neighbours. 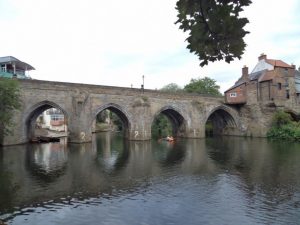 As well as being a fascinating snapshot in itself, this example, when placed within the context of other evidence respecting religious attitudes at this parish, those elsewhere in the city, and across the diocese, offers considerable insights about the incidence, strength and form of conservative and evangelical ideas, and how people were prepared to maintain, and even seek to persuade others of what they saw as the true Christian faith. Thus, the Prebendaries’ Plot fitted nicely within the conference’s remit and means it is a good place to stop and wish you all an enjoyable summer break.