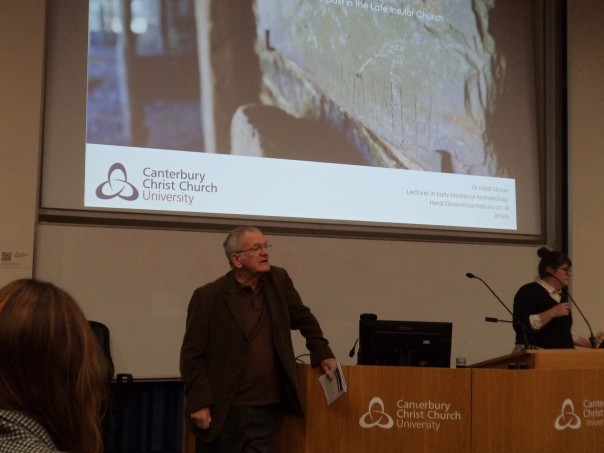 This week I’m going to reverse the order and I’ll give you notice of future events first before reporting on a joint FCAT and CKHH lecture given by Dr Heidi Stoner in Archaeology at CCCU. In part it is because this week Dr Diane Heath has been doing her ‘Beastly Latin’ and I have been finishing off a lecture I’ll be giving next Saturday at Almondbury in Yorkshire to mark 500 years since the construction of the spectacular nave roof. Like other projects, in the end it turned out to be very interesting, and I would now like the opportunity to visit Rotherham Minster.

However, to return to CKHH events in Canterbury, on Tuesday 11 October at 7pm we with St Paul’s church will be hosting, as part of Black History Month, Dr Ralph Norman in conversation with Pamela Roberts when she will be discussing her new book The Adventures of a Black Edwardian Intellectual. This book provides a biography of James Arthur Harley, who at one time was an Anglican minister at Deal. Pamela will first give a presentation of her discovery of his archive and her journey to bring it to publication before she is joined by Ralph to explore this fascinating story. Pamela is the founder of Black Oxford: Untold Stories, celebrating Oxford University’s historical and contemporary Black scholars from the turn of the 20th century to the present day. Her new book will be on sale at the event at a special discount. All are welcome to this free event at St Paul’s church, and donations are welcomed towards church funds.

Then on Saturday 15 October the Centre will be at the Medway History Showcase, which is being held at the Royal Engineers Museum at Gillingham. Diane Heath will be bringing her NHLF-funded ‘Medieval Animals Heritage’ project, I will be giving a short talk on Medway’s medieval hospitals, and we’ll be joined by Jason Mazzocchi, who has recently started a doctorate at CCCU, to showcase another enterprise we are involved in, the Lossenham Project. The Medway History Showcase began life as the west Kent section of Professor Mark Connolly’s (University of Kent) IHR Centenary Project and one of the leading organisers is Peter Joyce, another doctoral student at CCCU and member of the Kent History Postgraduates. If you would like to come along to find out more regarding the many history, archaeology and heritage activities that are taking place in the county, please obtain your ticket via https://tinyurl.com/mr2pjttn Or email MHS22@mail.com because this promises to be an exciting day.

On the Sunday will be the first of my Canterbury Festival walks when I’ll be discussing ‘Everyday Life in Late Medieval Canterbury’. We will be exploring what is known about some of its inhabitants by looking at the streets and marketplaces, houses and churches that were home to cap makers, shoemakers and many other artisans and traders. This walk will be repeated on Saturday 22 October, and both are on behalf of Canterbury Archaeological Trust.

Between these two walks, the Centre will be hosting daily lunchtime talks (from 1pm) as part of the festival. These have been organised by Dr Claire Bartram, are free and we hope will attract audience members from the university and the wider public. On Monday at St Paul’s church, Dr John Bulaitis will explore resistance to an ancient form of taxation, focusing on key figures in the Kent Tithe Wars as Kentish farming communities sought to prevent seizure of stock for tithe non-payment. Staying at St Paul’s for our Tuesday talk, Professor Carolyn Oulton will discuss how the special status of the seaside as both visually ‘glorious’ and socially suspect was intensified by the coming of the railway tourist in the Victorian period. Also on the Tuesday, Diane Heath will be speaking at the ‘Social and Environmental Justice for a Sustainable Future’ conference at CCCU.

On the Wednesday we will move to Old Sessions House and the old court room where Michelle Crowther will examine a creative writing society in late Victorian Canterbury and ask whether writing poetry and fiction for a manuscript magazine was a suitable occupation for a lady? Thursday sees us moving to the university’s chapel where Dr Maria Diemling will investigate the moving history of a Czech Torah scroll on loan to the Thanet & District Reform Synagogue in Ramsgate asking how this liturgical object survived the Holocaust and how did it end up in East Kent? Finally on Friday we will be back in Old Sessions House for Dr Martin Watts’ assessment of the construction and operation of a secret and controversial port at Richborough in the First World War.

The week after, as half-term week will see Diane with her volunteers and other helpers involved in more activities for SEND children and their families as she continues her excellent ‘Medieval Animals Heritage’ project. Thus, October is going to be another very busy month for CKHH!

Now to Dr Heidi Stoner’s lecture given to a smallish but extremely enthusiastic audience comprising members of the public, primarily FCAT member, CCCU staff and students. They were treated to a fascinating lecture on early medieval ecclesiastical sculpture that drew on examples from either side of the Irish Sea, a considerable number from the Isle of Man, as well as from northern England more widely. Heidi has relatively recently joined the staff at CCCU having previously held a Leverhulme post-doctoral scholarship where she was investigating the topic of her talk tonight.

Heidi began by discussing the early medieval church of St Gregory’s Minster, Kirkdale, pointing out how the inscription talks of its rebuilding and rededication when ‘Edward was king and Tosti the eorl’, thereby giving us a window of 1055 to 1065. However, it was not the rebuilding of a ‘ruined church’ that Heidi wished to emphasise, but rather that the church building incorporates quite a few earlier pieces of ecclesiastical sculpture that point to the church having had an active life as an ecclesiastical building over several centuries before the later 11th century.

Having highlighted this point, Heidi next took her audience to the Isle of Man to discuss many of the keeill (church) sites primarily in the north of the island. Relying on stylistic ideas, especially for crosses and the figures carved on either side of the main shaft, as well as the differential between the use of Ogham and runes, Heidi was keen to point out the likelihood that some of these mark early monastic sites, and possibly even the presence of a bishopric. Furthermore, the letter forms of some of the early inscriptions point to 7th-century parallels in places such as Iona and on the Irish side of the sea. Her many examples of crosses with figures on either side of the vertical shaft include hooded monks, a possible St John the Evangelist and some female figures who could be the Virgin Mary. An alternative would be to see them as donor representations, but in some cases, it is even impossible to tell anything beyond it is a human figure. Moreover, she was keen to point out that even when there is no representation of Christ, the presence of these figures means that liturgically/symbolically they are crucifixes.

Heidi was equally keen to point out that the iconography could have been used liturgically by contemporaries, a means whereby people could have worshipped both collectively and individually and where different traditions were in practice at times wielded one onto another. Now much of this analysis rests on stylistic perceptions, but it did make sense and the sheer number of crosses from different centuries and cultures provides a good, solid core of ‘reference’ items. Furthermore, such diffidence might also be expressed through the incorporation of early sculptural pieces in the subsequent reconstruction, crosses laid horizontally rather than vertically. Thus, Heidi was keen to demonstrate that some of these church reconstructions might be said to represent continuity rather than change (for whatever reason) as well as the idea of reconstructing a past that never actually existed.

Heidi finished her talk by saying she would like to take this further and consider a contrast – what was happening during these same centuries in Kent. For although we don’t really have early sculpture in the county, the significance of reused Roman materials could be explored much further in this context. This sparked a lively discussion, marking an excellent start to this series of lectures, so many thanks Heidi.