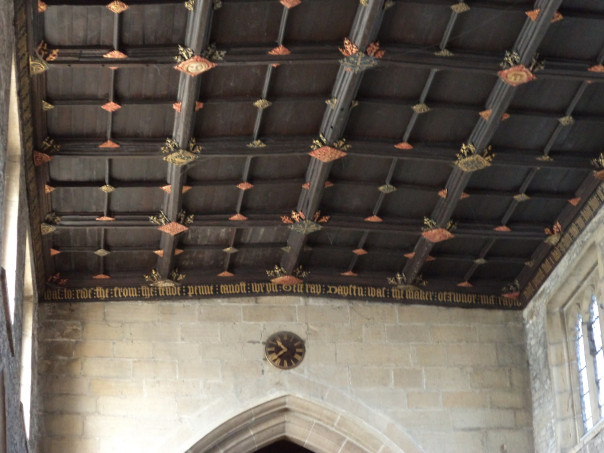 This week I thought I would report on several events that have taken place before I come to a quick recap about the lunchtime lectures, organised by Dr Claire Bartram, as part of the Canterbury Festival. These talks will be daily from Monday 17 October to Friday 21 October.

So I’m going to start with the roof at Almondbury church near Huddersfield in Yorkshire because it’s a great roof having a devotional poem in Middle English around the cornice with numerous decorated bosses across the ceiling. Chatting to people afterwards, the church had attracted an audience that extended beyond the parish on Saturday evening for the talk. As a way of giving people insights into the ways their predecessors from the early 16th century might have viewed their new roof, I took everyone on a voyage of discovery, starting with a short introduction to the question of why symbolism mattered to the Church and how this system worked. I have used William Durand’s Rationale Divinorum Officiorum with its four levels of meaning before because he offers a good explanation, and it works well, I think, with my next section on ways of seeing and responding as understood by those in late medieval society.

This took me back to Durand’s explanation of the symbolic meaning of the church building, and one of my favourite medieval church wall painting the Last Judgment from St Thomas’ church Salisbury, as an example of how a wall painting image could be ‘read’ and understood spiritually. Moreover, having shown how and why this worked for walls, I then turned to the roof and Durand’s point that this should be understood symbolically as ‘the princes of this world or the preachers who defend the unity of the Church’. This idea of the roof as symbolically lay and religious authority and protection seems highly appropriate for Almondbury, although I just concentrated on the preachers.

Turning next to the patronage of Almondbury parish church, I think this is a key factor because it was purchased from the Crown in 1488 by Archbishop Thomas Rotherham when he wanted to increase his endowment of his new Jesus College in Rotherham. The reasoning behind this new educational establishment and chantry college was partly to act as a feeder for his old Cambridge college of King’s and even more for Lincoln College, Oxford where Rotherham was a second founder. Through these colleges the archbishop was seeking to provide an educated clergy for his home province and county. Furthermore, he seemingly had a special devotion to the Name of Jesus, his six Rotherham College choristers expected to sing as part of the Jesus Mass at the Jesus altar he had commissioned at his local parish church in Rotherham.

Such Christocentric worship presumably continued after the death of the college’s patron and the college’s clerical appointee at Almondbury might have been consulted about the new roof in 1522. Indeed, this may have extended to the college community even though responsibility for the nave would have come under the parishioners and their elected representatives, the churchwardens. Taking this as my starting point because I think the potential input from Rotherham is important, we then explored the poem of Christ speaking from the Cross which is a far longer and more complex version of the ‘O man unkynde’ form that was reasonably common at this time. Thus, we looked at the different parts of the poem, the changes of tone, the fourth section being especially bleak on the danger of blasphemy, and how this could have affected readers as they studied the various sections, moving towards the final part that moves from despair to hope.

Then we studied the ceiling basses, especially those that seeming belong within the first two of five groups: the arms of Christ and those linked to the afterlife/heaven, to explore how they might have been deployed by parishioners in 1522 as highly valuable and valued devotional aids. For working with the poem, the poet/Christ was intending that ‘sinners’ could, through their emotional engagement with the sufferings of Christ, go beyond language, that would lead those who sought forgiveness and followed God’s teaching to gain a place in heaven. This brought us round full circle and, like their early Tudor predecessors, audience members were now in a position to understand how their amazing nave ceiling – text and image – could have been used devotionally, as well as how this feasibly reflects a fruitful relationship between Almondbury and Archbishop Rotherham’s Jesus College community in early Tudor Yorkshire.

Keeping with the ecclesiastical theme, on Tuesday evening the Centre with St Paul’s church, as part of Black History Month, hosted at the church Pamela Roberts introducing her new book on the story of James Arthur Harley who for some of his distinguished and varied career was an Anglian clergyman in Leicestershire and then at Marshside and later at St Leonard’s church in Deal. Dr Ralph Norman (CCCU) chaired the proceedings having met Pamela several years ago when she first started researching the life of James Harley. For this truly remarkable Black man from Antigua studied at several universities in the United States, including Yale and Harvard, before travelling to England to study at Oxford, gaining during his university career degrees and other qualifications in law, theology and anthropology during the first decade of the 20th century. During this period his ambition was to enter the Anglican Church as a cleric, something he first achieved when he joined the staff at the church at Shepshed in Leicestershire. As already mentioned, this was followed by two parochial appointments in east Kent, Harley having been ordained at Canterbury Cathedral in June 1911. However, his life as an Anglican cleric would be changed by WWI. During the first years of the war he, like many other clerics, used the pulpit to persuade men to join the army, and then in 1916, being too old to enlist, he trained as a munitions worker, which he did for the war’s duration. Yet all this had a profound effect on him and he turned to politics, returning to Leicestershire where he became an outspoken independent councillor at local and county levels, as well as the producer of the Shepshed Bulletin, a local weekly newssheet. Known for his radical stance he worked hard to improve conditions for the lives of poorer people in Leicester for the remainder of his life, dying in 1943. Yet his memory in his adopted town of Shepshed lives on because there is a road called Harley Close.

Perhaps almost equally interesting is the life story of his wife and her parents and their circle, but I’ll leave you to discover that in Pamela’s book: The Adventures of a Black Edwardian Intellectual. For now, it is worth recording that after this resume of Harley’s history by Pamela, Ralph joined her at the front of the church ‘in conversation’ as a way of bringing out more concerning this remarkable man, as well as Pamela’s own story about how she acquired some of the most valuable sources for Harley’s story. This similarly sparked questions from the appreciative audience, consequently after the presentation ended, Pamela sold several copies of her book, copies that are hot off the press.

This week also saw the first presentation within the Kent History Postgraduates group when Peter Joyce looked at the topic of water and its provision in Medway. Using water as his way in he explained how its provision offers a means to explore institutional charitable provision in the Medway area, for where people sited wells matters. Using a series of maps, including one of historic wells by the British Geological Society, Peter explained why access to water in the Medway area was especially challenging and limited, and thus how and why foundations such as the Sir John Hawkins Hospital and the houses of the Watts Charity had come to be established where they did. Moreover, as a great user of water, Peter discussed the siting of Woodhams Brewery, as well as commenting on the quality of water in general in Kent and that unlike some counties the local water is not ideal for the making of high-quality beer.

Peter was also keen to point out a source that he has come across recently. Produced during the Victorian era, the Journal of Gas Lighting, Water Supply and Sanitary Improvement offers fascinating and detailed insights into the provision and problems of these services, and thus provides material for social historians. This all sparked a number of questions to Peter, and the subsequent discussion covered topics such as the problems of getting beyond the accepted narrative of the history of the Medway area, the need to look more closely at the topography of the area to understand the earlier history of charitable provision, and the crucial nature of these links between water and human development for both historians and society more broadly.

So as well as these presentations, I want to reiterate details of what Claire has organised for the Canterbury Festival in terms of lunchtime lectures. These are: Monday 17 October to Friday 21 October. Monday and Tuesday will be at St Paul’s church featuring first John Bulaitis and secondly Professor Carolyn Oulton. Wednesday sees us in Old Sessions in the old court room lecture theatre for Michelle Crowther, Thursday’s lecture given by Dr Maria Diemling will be in the university chapel, and on Friday Dr Martin Watts will be back in Old Sessions. Do come along, no booking required.

Finally, Dr Diane Heath and Dr Pip Gregory are back into Green Dragon mode. Consequently, this week and a new group of volunteers were setting out a ‘baby dragon’ in the Becket garden. As before, this involved filling in the outline with rubble, and great that John Hills (Geography and Sustainability) was back helping again. More on this as matters develop, but good to see the team of staff and students working together again on this part of Diane’s ‘Medieval Animals Heritage’ project.