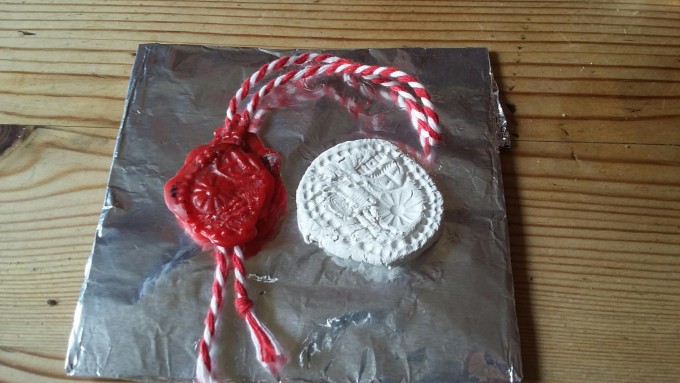 I thought I would begin this week with news about several events that are due to take place on and around 6 July, although before that I thought I would mention that Professor Jackie Eales is going to ask Matthew Crockatt to create a second virtual exhibition on the Centre’s webpages. You can see ‘Medieval Faversham’ already https://www.canterbury.ac.uk/arts-and-humanities/research-kent-history-and-archaeology/crkha-latest-projects/medieval-faversham.aspx and this second would be the Canterbury history posters produced by many of the taught MA students that featured in the blog a few weeks ago: https://blogs.canterbury.ac.uk/kenthistory/celebrating-canterbury-history-exhibition-by-cccu-masters-students/ .

In terms of news items, a reminder that the ‘Medieval Pageant’ will be taking place on Saturday 6 July. As well as the parade itself, there will be a family trail around the city where families can engage in making things and other activities at different buildings, thereby gaining stamps towards a chocolate ‘gold coin’. This time the Centre will be based in St Paul’s church just over the ring road and close to St Thomas’ RC church in Burgate (where you can make a bishop’s mitre, I believe). We will have shield designing and other ‘young medievalist’-type activities, and with us will be Annie Partridge of Canterbury Archaeological Trust and more family-friendly things to do. 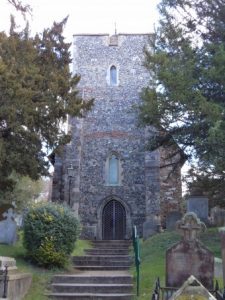 Also on that Saturday in the evening you have the choice of attending a talk by Dr Mike Bintley (Birkbeck, University of London) in St Martin’s church at 7pm on Finding Early Medieval Canterbury in the Old English Poem Andreas, cost £3 that includes light refreshment or of hearing Professor Jackie Eales at St Dunstan’s church where, as part of the commemoration service for Sir Thomas More beginning at 7.30pm, she will be speaking on The Education of Margaret More and the Humanist context of support for female education in the early 16th century.

Furthermore, if this wasn’t history and heritage riches enough, Drs Ellie Williams and Lesley Hardy with Professor Peter Vujakovic and hosted by the Reverend Mark Griffin of St Martin’s church invite anyone interested to join them for a community heritage project on Thursday to Saturday 4-6 July between 10am and 4pm daily in St Martin’s churchyard. The schedule for the three days is: Thursday: recording memorials and finding out more about the history of the church, including the identities of those buried there. Ellie and Lesley will provide all the necessary recording materials and so hope people will come and have a go! On the same day at 4pm, Dr Andrew Richardson (Canterbury Archaeological Trust) will give a guided tour of the church and its history. Friday: further recording of memorials and exploring the ecology of the site, the latter will be undertaken by a team from CCCU Life Sciences to gain ideas about the biodiversity of the churchyard. Saturday: the team would like to invite people to come and find out what they have discovered over the previous two days. 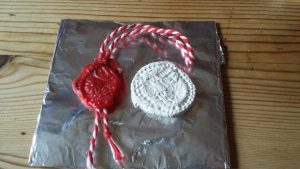 After news of coming events, I want to report on what has been happening this week. Among these, Dr Diane Heath has been leading three classroom workshops on family and gender in Magna Carta at The Royal Harbour Academy, Ramsgate, where pupils have been gaining knowledge about historic people such as King John, Matilda de Briouze, Nicola de la Haye and William Marshall, as well as designing their seal for their own Magna Carta. Like the original Magna Carta, which was between John and his barons denoting a pact about rights and responsibilities, the pupils’ Magna Carta will consider the relationship between them collectively and the school – a mini ‘kingdom’.

Professor Louise Wilkinson has been busy sorting out matters for the ‘Medieval Pageant’, as well as being in London for The Pipe Rolls Society meeting which included the Society’s new volume. The former had to be done this week because she, like Diane and several of Louise’s former and current doctoral students, will be at the International Medieval Congress in Leeds next week. Thus, just like last year, CCCU medievalists will be well represented.

Keeping with the medieval postgraduate theme, this week was the final meeting of the Centre’s Kent History Postgraduate group that has come together monthly to hear presentations about their various research topics. Indeed, these have featured regularly in the blog, and for this one I’m reporting on two fascinating presentations on early 14th-century Tonbridge. Both involved food, so it was great that Jacie Cole, also working on food for her doctorate but for a different time and under different circumstances was there. Maureen McLeod spoke first, and she explored the relationship between Hugh de Audley and Tonbridge through the household account for his residence at Tonbridge Castle for a period in 1320. Just to give you a few contextual details, Hugh was one of Edward II’s favourites, although not in the league of Piers Gaveston or Hugh Despenser. Nevertheless, his marriage to Margaret, one of the de Clare co-heiresses and Gaveston’s widow, elevated him socially and even more economically. This marriage gave him control of Tonbridge Castle, among other de Clare estates, but, due to his change in allegiance during the troubled times of Edward II’s later reign (as a rebel lord he spent time in prison and his estates were confiscated), he can be seen as a survivor, going on to serve Edward III. 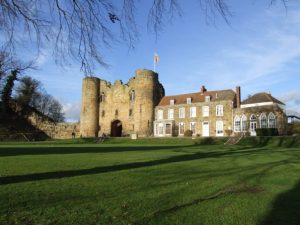 For the purposes of Maureen’s talk, the important issue was that he and his countess seem to have had a considerable affection for Tonbridge in that they stayed at the castle for longer than many who held it before and after. In addition, this surviving fragmentary account for part of 1320 is yielding insights into the management of their household at Tonbridge. For it was compiled on a daily basis and shows how much of the staple foods such as bread and ale were needed, but also the various fish, meats and wine provided, who arrived and left by horse – the stables account, and some ideas about the number and type of servants and other workers employed there. The range of fish and meat, especially whether it was fresh or salted is very interesting because it provides ideas about estate and local animal husbandry regimes, and it was also fascinating to learn that some of the fish was purchased from a London fishmonger. By looking at the stables account, Maureen is building up an idea of how long guests remained at the castle, their relative status and how Hugh de Audley and his wife fitted into the locality, region and even wider networks. Her presentation drew lots of questions and comments and we had a considerable discussion about these networks and spheres of influence, which will be a significant aspect of Maureen’s analysis on patronage and the development of Tonbridge.

Jane kept with the theme of accounts relating to provisioning because currently she is working on what has been labelled a ‘Pietancier’s Account’ roll fragment from 1-2 Edward III at the Bodleian Library. Now assuming this refers to the pittances and that the term in the context of a house of Augustinian canons, as at Tonbridge, was the same as at Benedictine houses, this according to Dr Barbara Harvey would have meant the extra dishes of food provided in the refectory for the brothers that contained a variety of foods. Thus, for those sitting at the same table, they might find they were eating different foods and these foods were better than the normal stables or ‘generals’. So what did these dishes contain at Tonbridge Priory in 1326/7? The answer would be good wheat bread and meats on certain days, such as ham, beef and chicken. Also, what seems to be a surprising amount of mustard, eggs and fish: the ubiquitous herring, sprats, and the odd cod and ling. This detail is fascinating, but Jane is going beyond it to think about a number of questions including what may this say about how the canons lived, how important were matters such as hospitality and alms-giving in the form of food, and how may this help her to understand the place and role of the priory in the local community and regarding the priory’s benefactors at the castle? Again, this provoked a considerable discussion and among the issues raised was the significance of pork in the canons’ diet, the role of pig-keeping locally, and whether this period, not long after the Great Famine involving high levels of cattle mortality, might be a contributory factor. As a result, the session went on for an extra 15 minutes before everyone decided all this talk about food meant we really ought to adjourn for lunch. 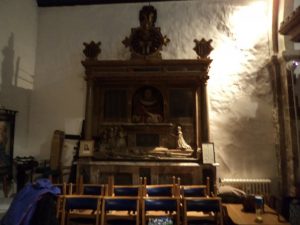 As a final point for this week, I thought I would mention another fascinating session I attended on Tuesday afternoon at the University of Kent. This was a workshop on trying to define the boundaries of the ‘middling sort’ in early modern England as part of Professor Catherine Richardson and her team’s AHRC-funded project on ‘The Cultural Lives of the Middling Sort: writing and material culture 1560–1660’. Catherine had set it up so that those attending brought along 3 pieces of evidence: for those above the middling sort; securely middling sort, and below the middling sort, and in groups we discussed how and why we had assigned ‘our people’ accordingly, and what were the issues raised, especially respecting the borders between groups. As well as historians, there were literature specialists and archaeologists, which meant the range of evidence provided was extremely varied and I don’t have room here to do justice to it. Consequently, I’ll just mention what I took and for each a single reason why I selected it. Thus, for the above group I went for Sir Roger Manwood’s funeral monument in St Stephen’s church, Hackington. The reason I chose this was because he intended that his almsfolk from Hackington should each receive a loaf of bread every Sunday and Wednesday from a place close to his funeral monument. Such an appropriation of ideas about patronage, alms-giving and memorialisation would seem well beyond the middling sort but characteristic of someone who had achieved social mobility into the gentry from a family of Sandwich drapers. My securely middling sort evidence was the intrants lists for Canterbury which showed that Thomas But, mercer, although not a freeman, was still able to trade independently in Newingate ward. I used him because he was his own boss with his own household, and he also demonstrated the importance of record linkage because his will survives too. My final piece was the inventory of Joane Stredwicke because, yes, she had sufficient goods that they were worth appraising, but just about everything was described as old and there really weren’t many things and no rooms were mentioned at all. I had her because I saw Joane as below the middling sort, yet I felt she demonstrated the importance of life-cycle stage in that as a widow with these possessions she may have ‘fallen’ from the middling sort. I was hoping this might bring in ideas about how individuals might have seen themselves, as well as how they may have been perceived by their neighbours, both at a point in time – death, but also bringing in the potential to remember her as she had been in former times. If you want to find out about the evidence others brought, check out the project’s blog at: https://middlingculture.com/​ .

The resulting discussion with all of this evidence from everyone on the various tables was great. Consequently, it hardly seemed any time at all before it was 4pm and the end of the workshop, and in true academic fashion most people headed to the bar at the Gulbenkian.

2 comments on “Exploring medieval society at Canterbury and Tonbridge”