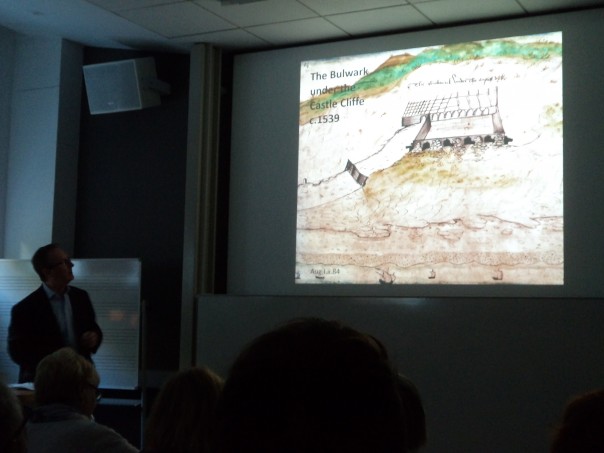 Last week the blog was exceptionally long so this week it will be shorter and will comprise a brief report on the lecture given by Jon Iveson (head of Dover Museum) on Dover’s 16th and 17th-century defences, which is a joint event organised by the Centre and the Friends of Canterbury Archaeological Trust.

However, before I get to this, I thought I would mention two history conferences coming up in June at CCCU. The first on Friday 14 and Saturday 15 June is a 2-day conference on ‘Negotiating Power in the Early Middle Ages’ at Old Sessions. The conference organisers aim to explore how authority (whether royal, ecclesiastical, or other) was gained, consolidated, and extended in the Early Medieval Period. This topic will bring together researchers from different fields, such as literature, archaeology, history, and art history to discuss the ways in which authority was approached during this period. The speakers will discuss a range of topics, including royal and ecclesiastical authority, and look at how power was interpreted and used in several countries. If this sounds interesting and you want to find out more, please use the link below for the conference programme and booking details at: https://www.canterbury.ac.uk/arts-and-humanities/events/arts-and-humanities/ckhh/negotiating-power-in-the-early-middle-ages.aspx 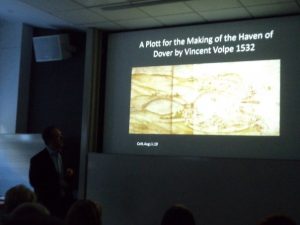 A week later, on Friday 21 and Saturday 22 June, there will be another 2-day conference on ‘Rebellion in Medieval Europe’, which will be held at Powell Lecture Theatre on the main part of the CCCU North Holmes campus. This conference will showcase the latest scholarly research on rebellion in medieval Europe, from c.1100 to c.1500. In the past, most analysis has focused on the causes and/or life-cycle of individual uprisings such as the Peasants’ Revolt of 1381, while a few studies have identified similarities between revolts at either a ‘national’ or local level. Furthermore, there has been little comparative analysis of political protest across ‘national’ borders and over time. To change this, the ‘Rebellion in Medieval Europe’ conference will explore different periods and ‘nations’/regions, thereby encouraging pan-European comparisons of popular revolts and the identification of common themes and causational factors. Again, if this sounds interesting please do check out the conference programme and see the booking details at: https://www.canterbury.ac.uk/arts-and-humanities/events/arts-and-humanities/ckhh/rebellion-in-medieval-europe.aspx

Last night, a sizeable audience of Friends, the public, staff and students came to hear Jon’s exploration of the developments at Dover harbour in the 16th and 17th centuries, with special reference to the importance placed on artillery by those involved in these defensive works. Using a considerable number of contemporary maps, Jon took his audience through from the late medieval, pre-artillery defences to the Stuart period where bastion forts were considered the most effective defensive structures. Among the themes he discussed was the relationship between the Crown and the town, especially monarchs such as Henry VIII and Elizabeth I, and how from the local civic authorities’ perspective they needed these works not only for defence but also to try to safeguard the port’s economy as much as possible. For the problems of longshore drift from west to east, and thus deposition of large amounts of sand and shingle at the mouth of the River Dour, the largest break in the steep chalk cliffs along this stretch of coast for about 20 miles, was becoming particularly acute in the early 16th century. Furthermore, erosion was similarly an issue, and it is possible that the eastern spur of the town wall by the shore was lost at about this time, the civic authorities abandoning the fight to keep this section of wall with its towers intact. 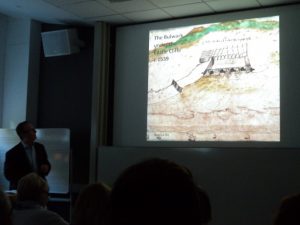 Jon examines the bulwark under the castle cliff, c. 1539

Having set the scene, Jon introduced his first contemporary map, a British Library map entitled ‘A Plott for the Making of the Haven of Dover by Vincent Volpe 1532’. Behind the production of this piece that shows the proposed harbour as a great swathe of water between the two ‘halves’ of Dover, in reality an opened up area of the river meadows, was the harbour crisis of the early 1530s. A number of suggestions were put forward to improve the harbour, and it was during this period that first Sir John Clerke and after his death Sir John Thompson were heavily involved. As respectively the penultimate and last master of the Maison Dieu, a pilgrim hospital under royal patronage, they were in many ways royal officials, and Thompson especially seems to have had far more interest in the harbour works than he ever had in managing the hospital for pilgrims. Initially several schemes were put forward, but financially the civic authorities were not in a position to carry out such expensive works and they soon petitioned Henry VIII for help. Following surveying in early 1532, the scheme put forward was to widen the river to create a haven for ships. This is where Volpe’s painting came in, it was seen as a means to try to convince the king of the value of this project. The mayor and jurats commissioned Volpe, the king’s painter to draw up the scheme, the town presenting the king with the resulting painting. However, even though the money was requested from Parliament to implement it, it didn’t happen and a royal commission of 1534-5 considered this and further schemes, including Thompson’s. 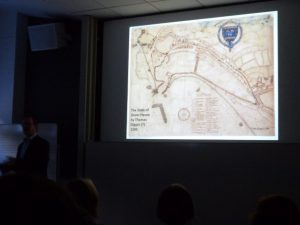 Jon showed ‘A Platt of the Woorkes Done by John Thompson’ 1538 which relates to one of the two plans he submitted in person to Henry VIII, the first in 1532, and this probably in September 1538. The story of Thompson’s involvement shows that he was somewhat of a disaster in that he got embroiled in Dover’s factional disputes and spent well over budget on the harbour works, which in turn brought him into conflict with the royal paymaster. Indeed, as Jon said, when Richard Cavendish took up his appointment as harbour engineer in 1537, he immediately sacked Thompson who appealed directly to the King to be allowed to finish his plan. By the end of July 1538 Thompson seems to have regarded the works as largely completed, but when Henry visited Dover in September 1538 he wasn’t impressed. The king commanded Thompson to send him a ‘platt of the woorkes done’ within 14 days. Jon believes this is the plan because it shows the East North East Jetty built in 1537 and is before the storms of the early 1540s destroyed much of the King’s Pier. Like Volpe’s depiction, it shows the major churches, as well as the Maison Dieu with the round top section to its square tower that had disappeared by the end of the century. In addition, there is a spire behind the hills, which makes it the only known view of Dover Priory’s church that disappeared very soon after the priory was suppressed in 1538 and there are other buildings and features, too, on the plan. 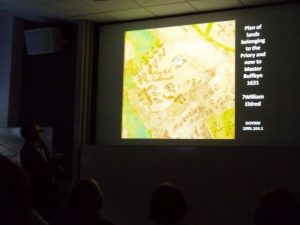 Jon discusses Archcliffe Fort as depicted on a 1631 plan

Jon next looked at the several bulwarks and Archcliffe Fort at Dover, including what we know about their location, construction, and use, as well as the type of artillery and how these guns may have been deployed at the various sites. However, I’m going to move on to Elizabeth’s reign and Thomas Digges’ plans of before and after his harbour works, which involved among other matters a new sluice as a way of clearing the harbour. These are far more accurate in terms of using compass points and measurements, ideas, as Jon said, that meant, for example, it was easier to gain some idea of the amount of building material required. He was also keen to point out just how large and complex these civil engineering projects had been and that fundamentally these ideas were sound, albeit construction methods and resources were often insufficient for the task. Yet Jon was concerned to stress that this very long and extensive project had represented an enormous investment in money, labour and time that was considerably hampered because work could only be done at low tide, such work having to be secured so that it was not lost by the incoming tide. Moreover, even though such schemes did bring short-term advantages, these were generally only measured in a matter of a couple of decades before deposition and erosion again claimed control. However, regarding construction materials, the Reformation did bring certain advantages in that there was a vast pool of building stone from the dissolved religious houses, while the Maison Dieu became a splendid Crown victualling yard, not very dissimilar from Thompson’s use of the place during his mastership. 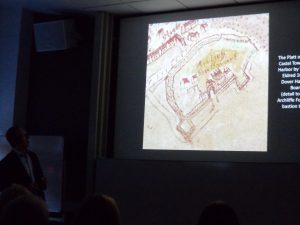 Jon then looked at developments in the early 17th century, and even though at times the planned structures were sound the actual work to implement the various plans was of poor quality. Nor was maintenance always seen as a high priority and in the 1620s those responsible complained that nothing had been done since Elizabeth’s reign. By this time responsibility was vested in Dover Harbour Board, the civic authorities having given up trying to finance the harbour themselves and had passed it over to the Crown. Things didn’t improve that much during the rest of the century. When the harbour was under parliamentary control, following Charles I’s fall, the profits from sequestration were put aside for this work, although how successful this was is not clear, and with the return of the Stuarts finance remained a frequent issue. Nonetheless, as Jon noted, the importance of maintaining Dover’s harbour and defences was recognised by all sides, but how this should be funded was another matter.

Such a fascinating presentation provoked a considerable number of questions on the maps from his audience, but also on the deployment of artillery and how different ideas had influenced matters of design of both the gun batteries and the guns themselves. Consequently, when the meeting drew to a close there were still people who wanted more information or to comment on what Jon had said – a great event on all counts!