July is major month for academic conferences and, as I mentioned last week, several members of the Centre were at the International Medieval Congress at Leeds a couple of weeks ago. Next week it will be Harlaxton where the topic this year is ‘The Noble Household’ and among the speakers will be Professor Louise Wilkinson, while this week at the University of Kent the Schools of Architecture and English had a conference on ‘Writing Buildings’. As one of the organisers, Professor Catherine Richardson chaired a session on ‘The Recreation of Lost Spaces’ that included a paper on a rather special Kentish building, Eastgate House in Rochester. This gem of a late 16th/early 17th century town house was owned by Sir Peter Buck. He was a Crown officer at Chatham to first Elizabeth I and then James I, his mansion a reflection of his status and wealth that was inherited by his son, another Peter, and it is their efforts that comprise the first six phases of the house’s development. The purpose of this session was to think how cultural scholars can investigate such buildings by bringing together both architectural surveys and documentary research to give a more nuanced view. Among the ideas explored were notions of use, access and how such buildings may have been perceived by contemporaries – an interesting discussion.

At the beginning of the week several members of the Centre, as well as Dr Andrew Richardson from Canterbury Archaeological Trust, attended the launch of Early Medieval Kent, 800-1220 at the Kent History and Library Centre, Maidstone. As the final volume in the Kent History Project series, it was great to see it alongside its companion volume, Later Medieval Kent, 1220-1540, as well as the other eight volumes in the ten-volume series. Sarah Stanley of the Kent County Archive service had organised a display as part of the launch and as you can see the county archives has a broad range of medieval documents. Among the guests were several of the original subscribers to the series as well as the widow of Dr Nigel Yates, who as county archivist had had the original idea for the series but who sadly died over a decade ago. 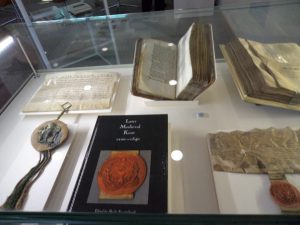 Part of the display at Maidstone

Representing Kent County Council, Mike Hill spoke about the Council’s commitment to the project that had begun in 1989 to mark the centenary of KCC, and how it was a remarkable achievement for any county, showing both considerable vision and scholarship through its coverage from prehistory to the 20th century. Mr Hill paid tribute to the original committee that had guided the project in the early years and to the County Council for continuing to back a succession of editors under first Nigel Yates as the general editor and more latterly Ian Coulson. He also thanked the Wardens of the Rochester Bridge Trust for their support throughout and Sarah Hohler, one of the Wardens, also spoke about the value of this collaboration between the two organisations to see the project through to its conclusion. She also noted that the first two volumes to be published had been on Rochester: histories of the bridge and cathedral which provided significant scholastic works on two of the county’s important institutions. Moreover, she was delighted to see the project had come to a satisfying conclusion and she congratulated KCC on this achievement. 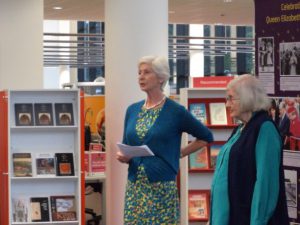 Sarah Hohler and Felicity Simpson with the books

As one of the founding members of the advisory committee, Dr Felicity Simpson spoke for her fellow members about the valuable contribution of Nigel Yates to the project. She also paid tribute to several of the editors who had also served as advisors, including Professor Alan Armstrong, who was present at the launch and is a retired economic historian from the University of Kent, and Dr John Williams, who couldn’t be present and who for many years was the County Archaeologist until his retirement. She was similarly delighted to see the completion of the series and was exceedingly grateful to both KCC and the Bridge Wardens for not giving up even though it had taken far longer than anyone had ever expected. 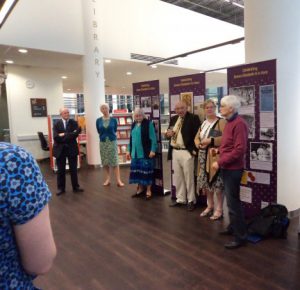 Being the final speaker, I paid tribute to Ian Coulson’s contribution to the project and started with a brief anecdote about my first meeting with Ian. This had taken place at County Hall, the old location of the county’s archives, where I had been stopped by an energetic stranger who had invited me to his basement office. Not knowing who Ian was but greatly impressed by his enthusiasm and engaging personality, I had ventured down to his office where I had been further impressed by his keenness and determination – he wanted me to edit Later Medieval Kent. So began a fruitful partnership that saw the publication of that volume, even allowing for a few hiccups along the way. At the time Early Medieval Kent was under someone else, only to be followed by yet another editor, Dr Jake Weekes of Canterbury Archaeological Trust. He was able to take the volume further than anyone before him but couldn’t take it to its conclusion for various reasons. It was at that point that Ian had agreed to take it on as there seemed no-one else. However Ian had by then taken on the Presidency of Kent Archaeological Society, was very actively engaged in ‘A Town Unearthed’ the Heritage Lottery Funded project that also involved members of Canterbury Christ Church’s Centre, especially Dr Lesley Hardy, as well as numerous other projects, which meant it seemed totally unfair for him to have to add Early Medieval Kent to the list. Thus taking a deep breath (I had no desire for another editing job) as I was working full time at the University of Huddersfield at the time, I took it on and, as they say, the rest is history. So paying tribute to my contributors, including those from the Centre: Drs Diane Heath and Gillian Draper, and most especially Ian for his encouragement, commitment and dedication, I finished by asking the assembled company to raise their glasses to ‘absent friends’, for like Nigel Yates Ian sadly did not live to see the publication of this volume having died last December – a great loss to his many friends and colleagues, and to Kent more generally.

Hence we come to today in what has been a busy week. One of the features of the Centre is that members from Canterbury Christ Church collaborate with local history and heritage organisations, as we saw last week at the ‘Medieval Pageant’, and today was ‘Friends’ day at Canterbury Cathedral. Due to particular circumstances, I had agreed to show a group of ‘Friends’ some of the documents in the cathedral archives, and Fawn Walters the archive and library assistant was present to get out the documents and ensure all was well during the presentation. It is worth noting that in the cathedral library Karen Brayshaw the cathedral librarian was similarly showing treasures from the cathedral’s rare book collection to groups of ‘Friends’. But to return to the archives, an enthusiastic band of ‘Friends’ looked at manuscripts such as the second of the city chamberlains’ account books from the 15th century with its original binding, another city book that contains notes of the coming of the great pestilence in 1348, the burial of Prince Edward (the Black Prince) and the Peasants’ Revolt, as well as containing extracts from wills made by Canterbury citizens from the late 14th century. 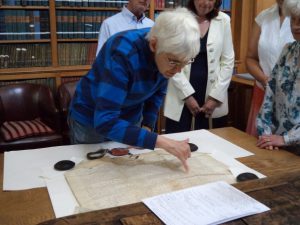 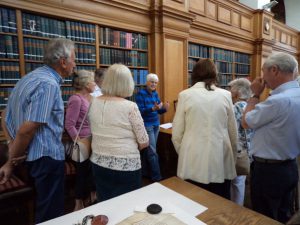 Having arranged the documents into four sections to look at co-operation, co-existence, conflict and compromise in the relationships between the city and Christ Church Priory, those under conflict primarily centred on two major disputes between the city and priory in the later Middle Ages, the first in 1427/8 involved, amongst other things, the disrupting of the river to the detriment of the various mills on the Stour, and a rather nasty ‘theft’ of a halibut from the prior’s man who was taking it from the fishmarket in Burgate into the cathedral precincts when he (and it) were apprehended by a civic officer. The second dispute in 1500/1 was probably even more serious and included what the prior called a riot lead by the mayor that culminated in a skirmish in the Rosiers, a meadow just outside Westgate. I don’t have space to go into further details here but just to say during the intervening period the city and cathedral did manage to draw up an agreement about who should be responsible for the maintenance of various sections of the city wall, and it is this agreement that we are looking at in the photo. As you can see I am pointing out the clause regarding the particular details of the wall’s dimensions, being careful not to touch this late 15th-century document. The second photo shows us about to consider the city’s seal with its representation of Canterbury Castle on one side – Canterbury the royal city, and St Thomas’s martyrdom on the other – Canterbury with its saintly protector. Thus ended an enjoyable occasion and if anyone feels they would like to know more about the county and Canterbury’s early medieval history, the ‘Early Medieval Kent’ conference will be taking place at Canterbury Christ Church on Saturday 10 September, details at www.canterbury.ac.uk/medieval-kent and I’ll say a bit more about it and other future Centre events next week.