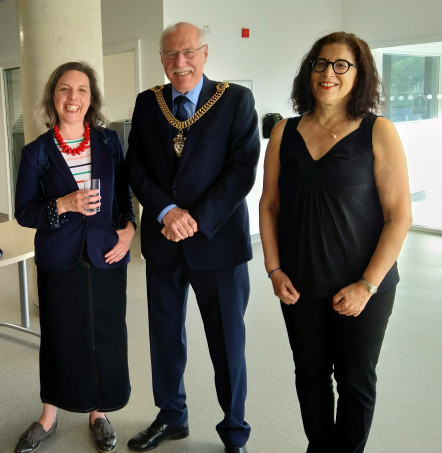 For this week I will be highlighting Professor Miri Rubin’s Becket Lecture, but before I get to that I just want to mention a few other activities involving members of CKHH.

Firstly, Dr Diane Heath and Penny Bernard have had a meeting with Dr Peter Rands and the CCCU gardeners about siting the ‘Medieval Animals Heritage’s’ green dragon within the university’s gardens and it now has a potential new location – within a lovely green space next to Becket. Penny has designed a ‘tool kit’ for how to make a dragon and hopefully this will start later in May as part of the university’s Sustainability initiative – watch this space and it is possible this will be a de-lux striped dragon! However, for the time being I thought you might like these two cute bright green dragons which came to visit the Centre’s office this week.

Secondly, I thought you might be interested in this development of Professor Paul Bennett’s lecture on the Prior Wibert Cathedral Waterworks plan that he discussed at the Canterbury Maps and Mapmaking: Imagining and Re-Imagining the City conference in March. Working with Dr Paula Simpson from Trinity College, Cambridge, you can now learn more about the plan as well as seeing the drawing in greater detail: https://www.exhibit.so/exhibits/edit/8RRsWFfF4Kt9mij7ewCv

Other developments have included Dr Claire Bartram’s and Dr Astrid Stilma’s engagement with the Aphra Behn project that is expanding across the city, and Claire’s involvement with the Canterbury Pageant, which will involve the CKHH having family-friendly activities in St Paul’s church again, as well as a route through the campus, perhaps ‘signposted’ by dragons that will join the three elements of Canterbury UNESCO World Heritage site together.

This brings me to two Lossenham Project meetings that I attended towards the end of last week, one being at Newenden, the other at Sandgate in the Isle Heritage offices. I’ll start with the former when most of the Lossenham Project wills group met to discuss progress concerning their exhibition pop-up banners for the Lossenham Priory Study Day on Saturday 3 September to an invited audience of representatives from local history societies and similarly interested parties. Among the ideas people are working on, Sophie is exploring the role of the Lossenham friars in commemoration, both at the friary church and at the local parish church, as well as the role of individual friars compared to the community as a whole. She has also found evidence of the deployment of gifts to the friars as a means to enhance relations between donor and recipient through the perceive medical value of the gift. Among the donor families she is including are the Twisdens, and later family members are the subject of Sara’s banner, although she has yet to decide what angle she will take.

Keeping with the idea of working on a specific family, Jane is using members of one line of the prolific Culpeper family to explore ideas about patronage concerning religious houses in the area of the Rother Levels. Keith’s, too, will bring together religious patronage and family ties because he is considering the Brekynden family and Smalhythe chapel that was built within the parish of Tenterden. This will draw on the work of Dr Robert Lutton, now Nottingham University, who studied orthodoxy and heterodoxy within the late medieval Church using Smallhythe as his doctoral case study.

As a way to explore how people and families managed their estates, and the assets within them Sue M will draw on certain Northiam wills to investigate the vocabulary used to describe landholding and land use. Furthermore, in looking at testators’ assets, Sue will consider industrial activities through naming practices within the landscape. Her second banner takes regional vocabulary as its way in to explore wills as documentary sources for the historian.

Annie’s project similarly focuses on material culture. Using Great Dixter as her case study, she is investigating how text and place can be brought together to explore how the family at a specific time, after the testator’s death, were expected to negotiate harmoniously the use of rooms, staircases and utilities such as wells and kitchens. Looking more specifically at gender issues and the position of women before and after their husband’s death, Sue H is using three wills to highlight the range of relationships seen between spouses and what this can tell us about early modern society. While for something completely different, Maeve will consider the archaeological finds relating to bones.

Hopefully this has provided a flavour of the range and scope that will be on offer to our audience in September, with the intention afterwards to reach more people by putting the exhibition on the Lossenham Project website. Moreover, for those keen to see what has taken place so far, please have a look at: https://lossenham.org.uk/

The following day Dr Rebecca Warren and I joined Russell Burden, the project’s artist-in-residence and the three members of Isle Heritage: Dr Andrew Richardson, Annie Partridge and Paul-Samual Armour for our monthly project meeting. Much of the meeting was devoted to the new season’s archaeological excavations – where and what will be explored this year, and how these fit into the overarching aims and objectives of the project. Paul had recently been down to Historic England’s offices at Swindon to examine their collection of aerial photographs from the 1940s onwards and these have shown up some potentially interesting features in the landscape. Obviously, Rebecca and I were able to provide information on the September Study Day, and it was also interesting to hear about Russell’s various initiatives and creative responses to the Rother landscape, and its underlying geology.

This relationship between artists and archaeologists is similarly the focus of the jointly organised lecture this week involving the CKHH and the Friends of CAT. Bryan Hawkins, until recently a lecturer at CCCU, is now working with CAT and in his talk, he will emphasise the significances – visual, literary and experimental – which have informed his work as a locality artist with a fascination for archaeology and its processes. On the back of the recent CAT dig at Rochester, one of the case studies he will explore is Kits Coty because he is especially interested in prehistoric structures, the people that made them and our responses to them, as well as the responses by others through time. Consequently, this promises to be a fascinating lecture and Bryan is hoping that it will generate ongoing conversations involving Friends as he develops this collaboration with CAT.

Now to the Becket Lecture and it was great to be able to welcome Canterbury’s Lord Mayor, CCCU staff and students (undergraduate and postgraduate), as well as members of the public to Verena Holmes to hear Professor Miri Rubin’s excellent lecture that took its cue from Black Lives Matter and modern responses – see Countee Cullen and Onleilove Alston – to ‘The Song of Songs’, specifically Chapter 1, verses 5 and 6. Indeed, in her assessment of Jewish and early Christian up to the 13th century commentaries on these verses, much hinged on the change (and not just once) of the use of the conjunctions ‘and’ or ‘but’ when linking ‘Black’ and ‘Beautiful (in simple terms the Jewish ‘and’, the Christian ‘but’), and the responses and meanings attached to these renditions of the scriptures. Such senses of equally or of opposition/adversarial were not only discussed in the literal or physical sense by these early theologians, but far more in terms of allegory and the richness of symbolism that characterised such writings.

Consequently, Professor Rubin took her audience on a voyage of discovery across the centuries to show how changing ideas and contexts in the Middle East and Christendom had influenced and informed what might be seen as ethnical encounters and theological understanding, and ultimately preaching both inside and outside the cloister. Beginning in the earliest Christian centuries, she considered the commentaries of Origen, of Alexandria and Caesarea, and that of Rabbi Isaac of Caesarea to highlight how they had responded from their differing perspectives to blackness and what it meant in terms of ancestry and the sinfulness, or otherwise of Jews and Christians.

Moving forward in time Miri considered the long-running Jewish Aramaic translations as well as those of Christian commentators such as Ambrose of Milan where he explored blackness and beauty in terms of the Church, setting up the pairs of fragility of the human condition and God’s grace; and sinners and the sacrament of faith. This exploration of the verse as an allegory for the Church was further explored by later commentators including Apponius and Gregory the Great, the latter again drawing on the binary of Black/Beautiful.

Coming to England, she introduced her audience to the ideas of the Venerable Bede and those of Alcuin from the court of Charlemagne, where there was a move away from the opposition between the personification of Ecclesia and Synagoga, to the sense of rifts within the Church itself.

The desire to build upon and extend such allegories was important to later commentators and the Glossa Ordinaria offered a rich reservoir of material for those working in the 13th century, including Stephan Langton, as archbishop of Canterbury, and the first generation of friars. It was at the point that Professor Rubin concluded her assessment, citing the work of Sefer Nizzahon Yashan from the late 13th century that can be seen to problematise the whole debate by turning it on its head!

Miri Rubin’s paper provoked numerous questions which she answered fully, including how was this biblical verse interpreted by commentators coming from the Byzantine world and how were and are Black Madonnas ‘seen’ in this context. So ended a brilliant Becket Lecture and we are very grateful to Professor Rubin for coming to Canterbury, it was a great treat. Afterwards the historians were joined by colleagues from across Humanities to celebrate by taking Miri out to dinner.