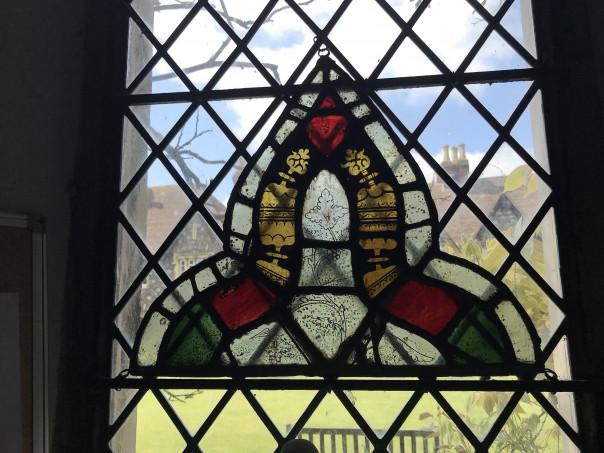 Amazing to think the Medieval Canterbury Weekend is now over and before too long we’ll need to turn our attention to Tudors and Stuarts 2023. However, it will be worth taking stock before then and I must admit I’m extremely delighted to know that it happened. This might seem somewhat strange but the combination of the new strains of Covid, events in eastern Europe and the cost of living crisis, especially the cost of fuel could easily have scuppered MCW 2022 far more than I think it actually did in the end.

So thanks very much to the people who had faith in the History Weekend to come back and to the people who came for the first time, we are extremely grateful not least because hopefully there will be some money from the Weekend after expenses and the university’s slice for central fees to add to the Ian Coulson Memorial Postgraduate Award fund. It was nice to know that we hit 1000 tickets sold, the vast majority for in-person attendance at the guided tours and talks.

Before I come to thanking the many people who made it such a successful weekend, I thought I would pick out just a few of the comments in the questionnaires made by attendees. Although this is quite long, I think it is a great endorsement of what we are aiming for in terms of ‘what did you like about the Weekend?’ “The variety and the diversity of subjects covered; something for everyone; as this is my 3 or 4th Weekend over the years it is significant that the quality after a 2 year interlude has come back just as good.” It was also great to see the students praised: “Knowledgeability/friendliness of ‘volunteers’ guides/assistants” who were indeed a credit to themselves and the university. While someone else commented: “So well organised. Clear sign posting, always someone at hand if you needed help.” It was also good to see that the format was appreciated: “Flexibility to attend a few sessions rather than all – I have not experienced this model before but think it is a good one.”

Turning to those involved, beforehand Kellie Hogben from the Box Office had sent out the various livestreaming links, while Matthew Crockatt and his colleagues had constructed the web pages. Matthew also very kindly acted as CCCU’s representative for the Cathedral Archives tours led by Cressida Williams, Archives Manager, so our thanks to all concerned there. Keeping with the guided tours, my thanks to my Co-Director Dr Claire Bartram for being the university’s representative for Professor Paul Bennett’s tours of first St Mildred’s church and then Eastbridge Hospital. As well as thanking those at these two institutions, I should also like to thank Sidney and Grahame from St John’s Hospital who ensured that we could enter the Norman reardorter and Tudor refectory, and thanks, too, to Kieron Hoyle my assistant at the hospital.

Returning to the campus, thanks are due to Louise Mallon’s team from Hospitality who staffed the Touchdown café over the weekend, to Craig Dadds and his team who similarly provided opportunities for attendees by opening the CCCU Bookshop, to Ruth who looked after the temporary box office on the Saturday, and to Sue and her team from the Graduate College who staffed a stand in Touchdown. Next, I want to thank the student and other volunteers (Eli, Amy, Isabelle, Kaye, Annie and Jason) who looked after our audiences, as well as Leo and Rob on the cameras, and great to see that we had such a spread from 2nd year undergraduates to doctoral students, as well as three alumni (Josh, Brad and Matthew) from the taught Masters degree from a couple of years ago who came back specially to Canterbury to take part.

Thanks, too, to the various staff members who acted as chairs of the various talks. Claire has already been mentioned but equally Drs Diane Heath, Pip Gregory, David Budgen, Seb Browne, Dean Irwin and Maria Diemling, as well as Edward Skeates and Kieron Hoyle. Diane’s contribution extended far further and included her lecture about medieval dragons indeed, she and Professor Sophie Page are going to have a follow-up meeting about dragons very shortly. So thanks very much Diane, and similarly many thanks are due to Toby Charlton-Taylor for his help and expertise with the AV and for fielding numerous questions about the livestreaming from those online. Those at Security also contributed and it was excellent to witness this great collective effort to make the experience for attendees as good as possible.

Next, of course, I want to thank all our speakers who were prepared in give up their time to come to Canterbury to present their research findings. Moreover, it was great to see many of them attending other lectures, as well as talking over lunch and being extremely friendly and helpful in their dealings with the volunteers and with those attending.

Thinking about legacy, Diane has hoovered up the various tweets to make them into a commentary about events over the Weekend, while Matthew and the Marketing Services team will, I’m sure, help us to put the souvenir brochure and other material about the Weekend, including further photos, online perhaps on the Centre’ web pages or similar. This is valuable for the university as well as for the Centre because it is our public face and hopefully also of interest to an internal audience.

As noted by our audience, we offered a diverse range of presentations, and, as Dean pointed out, there has been a shift away from ‘kings and queens’ towards ‘social history’! However, I don’t have time or space to go through everyone’s presentation, so I’m just going to provide some points from a few sessions and hope this draws you to Tudors and Stuarts next year. Dr David Rundle’s fascinating opening lecture highlighted what a dynamic, intellectual hub Canterbury had been during the 15th century, which had implications for the flow of texts, people and ideas from Canterbury to Oxford, rather than the other way as might have been expected. In part this was due to the ‘heavyweights’ Prior William Sellyng and Prior Thomas Goldstone II at Christ Church Priory, the latter firmly demonstrating that the Renaissance was well and truly in England as seen in the design of Christ Church Gate. Keeping with material culture, it was intriguing to hear that Goldstone had also been involved in commissioning tapestries to line the cathedral’s choir, such works made in the Low Countries.

Keeping with the idea of innovation, Drs Ryan Perry and Hannah Schühle-Lewis offered an extremely interesting assessment of the way texts seem to have been borrowed for copying, sometimes multiple times, by scribes and London clerics from the Guildhall Library, a project overseen by London’s common clerk John Carpenter that owes much to Whittington’s legacy. The way the team have mapped the networks of these texts is brilliant and placing this beside social network analysis of the wide range of merchants and clerical people involved will highlight just how extensive and potentially far-reaching such networks might be not only in London but in its hinterland and possibly even further afield.

Turning to something completely different, it was fascinating to hear Dr Chris King on late medieval vernacular buildings, and what we know of the people who inhabited a broad range of urban properties – from great merchants’ houses to small artisans’ cottages, the ‘rows’ of tenements. Chris offered examples from Southampton, Coventry, York, with local ones from Sandwich and Faversham, but his most extensive survey was from Norwich. It was great to see how he brought together the different types of evidence from standing buildings to rentals and deeds, to inventories and wills. For as he said, it was important to put the people in the buildings.

There are too many other great presentations to mention within the available space, but I thought I would draw attention to Dr Sarah James’ exploration of the way Cyprus was perceived by different groups, especially those who went on pilgrimage to the Holy Land from Western Europe. The meeting of different cultures and religious traditions within Christendom at this point in the eastern Mediterranean and the ways language and geography could be misinterpreted was fascinating.

For the misconstruing of Cyprus as God’s mystical vineyard as immortalised in the ‘Song of Songs’ brings me to the Becket Lecture due to take place on Tuesday 10 May at 6pm. We are very fortunate that Professor Miri Rubin will be coming to Canterbury for what promises to be a great presentation, another point where cultures meet when she will speak on ‘Black/Beautiful: The Meanings of Blackness in Commentaries on the ‘Song of Songs’’. This lecture will be in Verena Holmes VH0.04. Thanks to the generosity of the Vice-Chancellor there will be a wine reception from 5.30pm, so please do join us. It will be possible to join online through Teams using this link: https://teams.microsoft.com/l/meetup-join/19%3ameeting_YmJiMmU2NTctNDQ0Ni00MzNjLTlmZDAtZjQwMzVkMjNlZjNh%40thread.v2/0?context=%7b%22Tid%22%3a%220320b2da-22dd-4dab-8c21-6e644ba14f13%22%2c%22Oid%22%3a%225438ffb7-ff66-44f6-9ccf-cf504309571b%22%2c%22IsBroadcastMeeting%22%3atrue%7d&btype=a&role=a

And just to confirm, the lecture will not be recorded.