Before I move to the main section of the blog this week, I thought I would alert readers to a new blog that is be launched on Monday 5 September by my colleague Dr Claire Bartram, a senior lecturer in English Literature here. Her new blog is part of the Shakespeare 400 celebrations and will be discussing, among other questions, whether the Bard is like Marmite; what did Shakespeare mean to people living in Kent in the late 16th and early 17th centuries; and is it possible to find any evidence about this in the archives? So if this sounds interesting, please check out her blog at http://authorshipearlymodernkent.wordpress.com

Again, before getting to Professor Martin Biddle’s lecture, I thought a reminder about the ‘Early Medieval Kent’ conference a week tomorrow on Saturday 10 September might be a good idea. Tickets are still available and booking via the website, in person and by phone will be available until early Thursday afternoon. Thereafter the box office will close BUT tickets will be available on the door on Saturday. To date we have sold over 110 tickets, which is great news. However, if you haven’t signed up and hearing talks on such topics as ‘The making of the Kingdom of Kent’ by Dr Andrew Richardson (Canterbury Archaeological Trust) and ‘Arson, treachery and pillage: early medieval monasticism’ by Dr Diane Heath (Canterbury Christ Church) sound attractive, please do check out the website at http://www.canterbury.ac.uk/medieval-Kent for further details.

And while I am mentioning Centre events, I thought a quick reminder regarding the Fifth Nightingale Memorial Lecture organised jointly by the Centre and the Agricultural Museum Brook might be another good idea. This open lecture is available to anyone, just come along on Wednesday 21 September for the wine reception at 6.30pm in the foyer of Old Sessions House (next to the old prison) that precedes the lecture. This year Professor John Martin (De Montfort University) will be giving the lecture under the title ‘Wartime Farm Revisited’. It promises to be a fascinating topic, not least because John was the agricultural consultant for this BBC TV series. 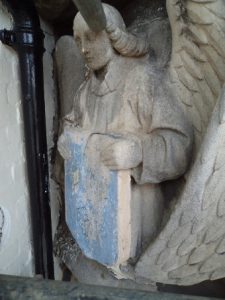 Another angel on Christ Church gate

As the first lecture in the Society of Church Archaeology’s annual conference, held this year at Canterbury Christ Church, it was highly appropriate that the speaker earlier this evening should be the recently retired Canterbury Cathedral Archaeologist Professor Martin Biddle. To begin his talk he ran through his early career, highlighting how fortunate he had been to work under many of the best archaeologists in the business in the 1940s and 1950s. Indeed, he even managed to spend the last months of his national service working on a dig in Jericho, and his most famous work as an excavator took place at St Alban’s, Repton, Winchester and Nonsuch Palace, all good preparation for his time at Canterbury that began in 1987. From my perspective, the reference to Nonsuch was especially interesting because having been at secondary school in Wallington our great sporting rivals were the girls at Nonsuch, another girls’ grammar school in south London.

Professor Biddle referred on several occasions to his work elsewhere as he drew comparisons to the situation at Canterbury Cathedral and its precincts. Through a number of case studies below and above ground, he showed his audience just how important it has been to have first class people and organisations working on the archaeology, planning and conservation in an attempt not only to preserve the fabric but to explain what is there and how it has developed over the centuries. For example, he highlighted the long, protracted problems the Dean and Chapter have faced concerning the provision of a lift for disabled visitors who want to enter the Great Cloister from the north-west end of the cathedral. As he said, the early tiles discovered as part of the excavation in the cloister there are important, but so is the provision of a lift. From his perspective, provided the tiles and surrounding archaeology are recorded appropriately, he can see no good reason why the tiles cannot be lifted and displayed on a particularly ugly bit of modern walling in the west walk of the cloister. This would provide an ideal opportunity to show and tell visitors about the medieval flooring, as well as covering up the offending bit of wall and making it possible to set in a lift. 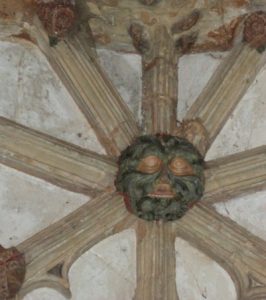 On several occasions, he complimented Canterbury Archaeological Trust’s work, including the production of high quality detailed drawings by Rupert Austin. He noted the advances in drawing methods now available, especially the harnessing of new technology, something that the Trust is keen to embrace. Moreover, Professor Biddle explained how such drawings were used by the conservators such as the stonemasons, to manage areas like the south-east transept and its great window. To finish, he introduced his audience to two hidden chambers below the Corona chapel that he believes would have been used in an emergency to store/hide precious objects and bullion – a fascinating use of space.