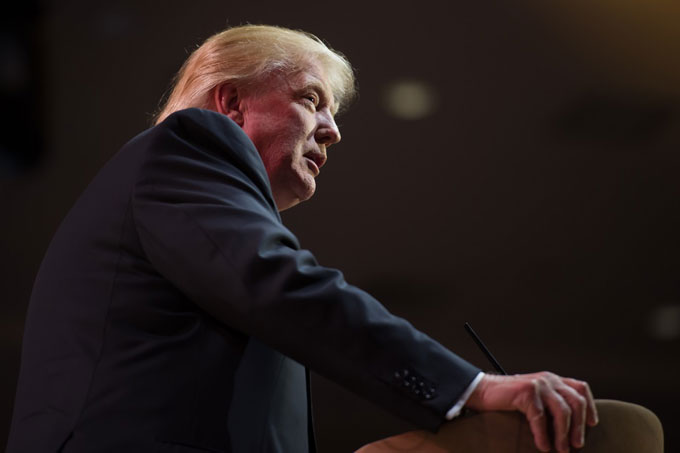 Ahead of the US election on 8 November, Kevin Ruane, Professor of Modern History, reflects on the nuclear anxieties associated with a possible Trump presidency.

In August this year, no less than 50 Republican national security experts aired their fears should Donald Trump become President and thus gain access to the USA’s awesome arsenal of nuclear weapons. ‘If we have them, why can’t we use them?’, Trump repeatedly asked one senior briefer. (Independent, 9 August 2016).

The British government is also doubtless in a state of agitation and anxiety at the prospect of a Trump finger on the proverbial nuclear “button”. Then again, since the dawn of the nuclear age in 1945, UK governments have routinely succumbed to nuclear nervousness around the time of US presidential elections. Trump might be more alarming than most White House hopefuls, but he is in distinguished company when it comes to arousing concern in the corridors of British power.

For much of the Cold War, the United Kingdom was a primary target for Russian (Soviet) nuclear attack if “hot war” broke out. True, there was not much to be done if the Soviets launched a surprise attack. But what of the Americans? Here we find plenty of evidence of British worries that recklessness, provocation or miscalculation by Washington could bring on a general war with Russia which would leave the UK a radioactive ruin while America possibly went unscathed.

In November 1952, for example, the British Prime Minister, Winston Churchill, was delighted by the presidential triumph of his old wartime comrade-in-arms, General Dwight D. Eisenhower. At the same time, Churchill privately confessed that ‘this makes war much more probable’.

What frightened Churchill was not Eisenhower, a sane and sensible man. Rather, it was the Republican party in general, out of office for twenty years and populated (so many in Britain believed) by anti-communist fundamentalists bent on using America’s great nuclear advantage to coerce the Soviet Union into agreeing to an international settlement on Western terms.

In the event, Eisenhower confounded British doubters and held the Republican right-wing at bay while shaping a US nuclear policy far more measured and statesmanlike than his party’s electoral rhetoric had suggested. “Ike”, though, had a dodgy heart, and that troubled the British. ‘We must hope that Gen. Eisenhower stays alive’, wrote one senior Foreign Office official at the end of 1952, otherwise his Vice-President would be in the charge of nuclear weapons. And who was that? A certain Richard M. Nixon.

UK governments have usually been more anxious about Republican than Democratic presidents in the nuclear age: aside from Eisenhower, Nixon in 1968 and Reagan in 1980 caused tremors in and beyond Whitehall. But even in these instances, wisdom and decent judgement mostly prevailed. After all, the Cold War remained just that, a cold war.

As for a President Trump, I suspect that Theresa May’s government is today experiencing the same nuclear nervousness as its predecessors, but in more acute form thanks to “the Donald” factor. In the past, incendiary nuclear rhetoric by would-be presidents has seldom crystallized into policy following victory. But what of Trump? Here the fear will be that Trump will live out or live up to his rhetoric. But with a new Cold War in the offing with Putin’s Russia (and like the old Cold War, this one has real war potentialities), now is not the time for hot-heads in the Oval Office.

Then again, we may be worrying unduly. Trump wants a ‘special relationship’ with Putin, he says. In which case, we may be able to shelve some of our nuclear worries if Trump wins on 8 November and get on instead with dealing with the consequences of his craven appeasement of Russia.