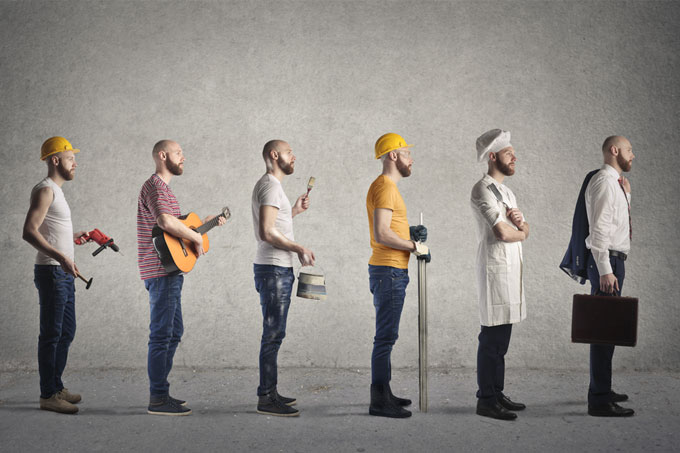 It’s January and the phrase ‘New Year, New Me’ can be heard everywhere, with many people’s New Year’s resolutions to find a new job. Dr Jesse Potter, Lecturer in the School of Psychology, Politics and Sociology, discusses why we often look to change jobs, and even career path, during our working lives.

In his 1998 sociology classic The Corrosion of Character, Richard Sennett argued that young people, with some higher education, could expect to change jobs eleven times over the course of their working lives, and their skill base three times during that same period. Eighteen years on and in the wake of the great recession, the propensity towards change remains. It has long been the case that, for many, having a career means having a series of jobs and occupations. Moreover, successive waves of firings and redundancies have left workers from all ranks of the labour force on the move once again.

This trend is not new. Nor is it necessarily tied to the ebb and flow of the economy. For many individuals the reality of work-life trajectories is that they are fragmented, piecemeal, and incoherent. Having a career often means having a series of jobs linked only by succession, and rarely by substance. Despite this, our understanding of career and our expectations for what it means to have one still portend a work-life trajectory that is linear, forward moving, and marked by hierarchical progression. The spectre of lifelong career can be haunting in that the promise of work that is fixed, stable, and coherent still dominates our sense of the ‘successful career’; and does so despite career narratives to the contrary.

Bearing in mind the wider prevalence of fragmented trajectories, we are long overdue greater consideration of how we manage to find meaning when faced with them. In the absence of the (real or perceived) certainties of stable, life-long employment, how do we ‘cope’? What we find is that we conscientiously ‘labour’ in making our working lives satisfying and meaningful, and we often do so in the face of work that is misaligned with our intrinsic values. In this way, integral to what we might understand as one’s career are a myriad of decisions and entanglements, some of which are inseparable from our jobs, and many of which occur far away from the productive arena. We know this because our conversations about work are incessant; and invariably drift from the organisational, institutional, or structural to our feelings, intimate relationships, values, desires, and commitments.

These conversations, it seems, are a vital component of any working life. Regardless of where we stand in the social or productive hierarchy, or whether we are on the front lines of the latest shock to the structural economy, we actively work on mending, or reconciling, the productive and the personal. These suggestions simply point to the need to (re)articulate the everyday acts of creativity, critique and capitulation that go into the labour of making working lives meaningful. That labour should be considered an integral feature of what it means to have a career.

Dr Potter has recently written his book Crisis at Work: Identity and the end of career (2015), published by Palgrave.