LGBT rights at the UN and beyond?.

LGBT rights at the UN and beyond?. 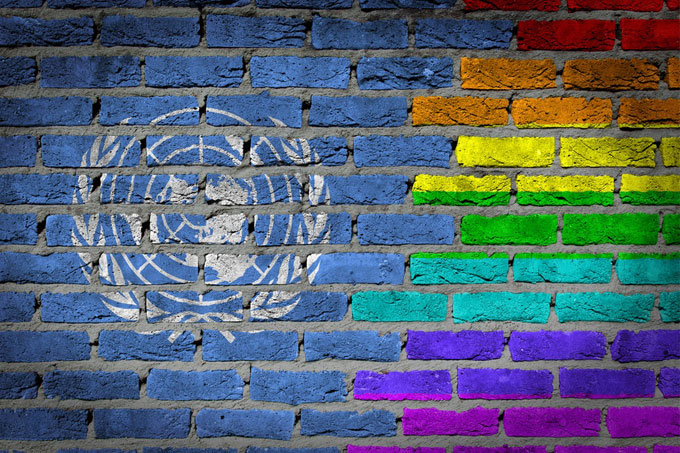 Outgoing UN Secretary General Ban Ki-moon has rightfully attacked ‘weak opponents of LGBT rights’ in a recent speech. While the South Korean UN chief himself has been an outspoken ally to Lesbian, Gay, Bisexual, Trans, Intersex and Queer citizens around the world, the United Nations has a questionable record on LGBT rights’ support; Saudi Arabia, a country notorious for its Human Rights violations, took over as head of the UN Human Rights Council (UNHCR). The effect of this hypocrisy has been chilling and immediate: in April this year, Saudi Arabia supported the right to torture and execute LGBT people at the UNHRC.

It will be crucial for global LGBT rights that the new UN Secretary General is successful in negotiating the minefield between governmental Human Rights’ abuse apologists and those in the Global Northern elite, who defend them in the name of postcolonial ‘agency’. Religiously and culturally camouflaged, state-sponsored heterosexism and anti-LGBT violence sometimes strangely ally with the counter-solidary, self-petrification of the radical urban elite in the Global North, who dare not speak out against it. This is out of fear, to be seen as complicit in neo-imperialist projects such as ‘homonationalism’ (the instrumentalisation of LGBT rights for neo-colonialist state-politics) and islamophobia. But clearly, absolutist and closed ideologies driving discrimination and violence need to be challenged, regardless of their cultural disguises.

Grassroots activism, such as our Queering Paradigms (QP) project undertaken in the Intersectional Centre for Inclusion and Social Justice (INCISE), with its global-local agency and solidarity concept, can help bridge the divides and make meaningful contribution to the lives of LGBT people, as the QP projects recent successes in South America and the Caribbean demonstrate.

The hope to aid sustainable inclusion and social justice has given birth to QPs new academic home at Canterbury Christ Church University, the INCISE research centre.

Find out more about the research projects being undertaken by INCISE, by attending the official launch of the Centre on 14 October 2016 at Canterbury Christ Church University. More information about the launch and how to book a place can be found on the INCISE website.